Overall, the Valkyrie Elysium demo serves to assuage the concerns of longtime fans who are anxious with the series’ transition to action-RPG.

Fans of the Valkyrie series have been anxiously awaiting the series’ transition to modern consoles. Ahead of its launch later this month for PlayStation 4 and 5 consoles, with a PC release following later in the fall, Square Enix and developer Soleil have released a demo of Valkyrie Elysium. RPGamer was provided early access to a demo, which showcases the game’s tutorial and part of the opening chapter, introducing combat mechanics, and establishing the story.

The demo of Valkyrie Elysium lasts less than three hours. It provides the backstory for the Valkyrie, a lesser god created by the All-Father Odin who is embattled and injured after a conflict with the mighty Fenrir against the backdrop of Ragnarok, the end of the world. Valkyrie has been created for the express purpose of finding and purifying lost souls as a way to bolster support for Odin during the dragging conflict. 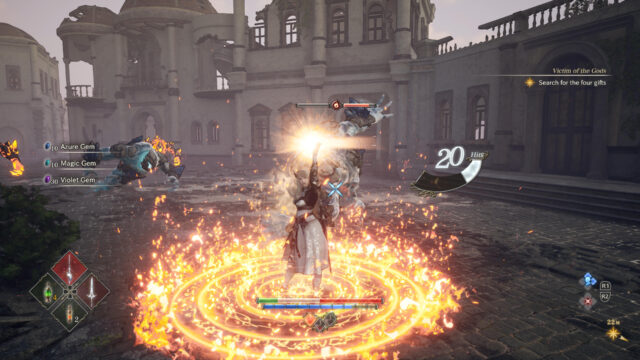 Combat is fast, furious, and flashy.

The titular Valkyrie is enigmatic and taciturn, singularly focused on her mission. She is awoken by Odin during the tutorial while the combat systems are explained. Players are also given a Soul Chain, which is able to serve as a grappling-hook at designated locations, as well as used in battle. This allows Valkyrie to traverse difficult spaces and often leads to hidden locations with treasure chests or Hollow Blossoms, collectible blue flowers which represents the souls of those left behind.

Combat is fast, fluid, and easy to follow, with players exclusively controlling Valkyrie in  a shift from the turn-based mechanics used in earlier games in the series. Yet the transition to action-oriented combat is gracefully handled, with sufficient infusion of Valkyrie Profile DNA that feels organic and natural. Valkyrie is able to equip two weapons and alternate between them on the fly to exploit enemy weaknesses. Basic attacks are utilized by pressing specific buttons; as combos are successfully landed and enemies defeated, Valkyrie’s Soul Gauge fills up. By holding L2 and a mapped button, Valkyrie’s abilities (known as Divine Arts) can be deployed. During the demo, these Arts included elemental and non-elemental attacks, as well as a healing spell. Targeting of enemies is precise and smooth. 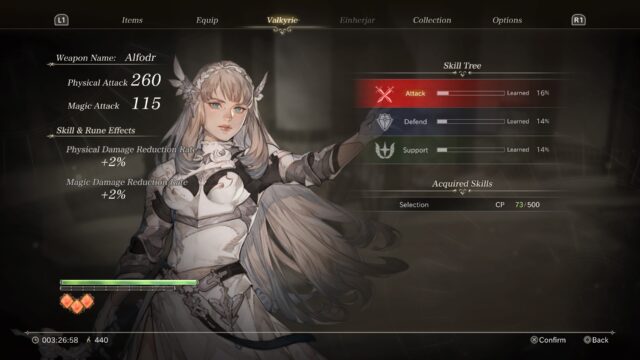 The menus are sleek and well-organized.

As enemies are defeated, they drop multi-colored gems which provide health increases, points to upgrade weapons and skill maps, and build up the Valkyrie’s Soul Gauge in order to use abilities or summon Einherjar. Again, Valkyrie Elysium takes a concept from the parent series and upgrades it for the modern era. While prior games had Einherjar serve as party members in each battle, Elysium allows Valkyrie to summon them in battle only after sufficient energy has been amassed. The summoned ally will appear for a limited duration, utilizing their own skills as well as providing elemental bonuses to corresponding Divine Arts. Outside of battle, Einherjar can be invoked to provide navigational assistance, like creating a platform out of magic in a nice callback to the limited platforming in Valkyrie Profile.

At the end of the first story mission, Valkyrie encounters a large, grotesque spider-type demon. This boss battle is tricky and requires use of the game’s myriad battle mechanics. Thankfully, the tutorial is sufficient at explaining these conventions at the onset and the enemy is quickly dispatched, with players able to target specific appendages, including the enemy’s legs or arm. 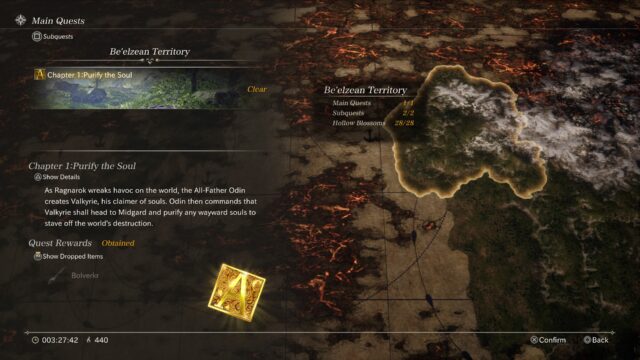 Missions and sidequests are selected from an overworld map.

The graphics are striking, with realistic character models and environments that are accentuated with a cel-shaded effect. The character models for Valkyrie and other main characters are detailed and expressive, although Odin’s facial rendering looks a touch too plastic. There were only a handful of distinct enemy designs on display during the demo, but these enemies — usually ghastly remains of creatures or humanoid forms — are well drawn and represent the game’s themes of being mired in death and the languishing undead. Valkyrie in particular is well voiced, but the voice acting featured in the demo is of varying quality. The music is composed by series veteran Motoi Sakuraba, who is also known for his work in the Tales series. Fans of either series will recognize his work instantly, and his work featured in the demo thus far does not disappoint, lending another classic series hallmark to the title.

Overall, the Valkyrie Elysium demo serves to assuage the concerns of longtime fans who are anxious with the series’ transition to action-RPG. Certainly there are those who will be displeased with some changes including the shift towards action-oriented combat. However, series staples appear to have been incorporated in thoughtful ways that show deference to the history of the series. Whether that balancing act is maintained in the retail release will be revealed later this month. Valkyrie Elysium launches for PlayStation 4 and PlayStation 5 on September 29, 2022, with a PC release is scheduled for November 11, 2022. Digital Deluxe Editions are offered for the console versions, which include a copy of Valkyrie Profile: Lenneth, the PSP port of the first game in the series.

Disclosure: This article is based on an early build of the demo provided by the publisher.