An Old-School Adventure Given a Modern Coat of Paint

Saturated in vibrant colors and an old-school video game charm, Trials of Mana deserves more praise and attention than it will likely gain. The 16-bit remake shows that Square Enix knows how to transform a 2D game into a modern 3D RPG. With each area painstakingly recreated, the game feels like a love letter to fans of the classic style JRPG narrative. It injects a few modern tweaks here and there but boldly sticks to its roots. This boldness will ultimately one of the reasons why the game is so enjoyable.

Known as Seiken Densetsu 3 in Japan, the original Trials of Mana came out in 1995. The title never saw the light of day in the west until it was released as part of the Collection of Mana in 2019. The remake of the 16-bit Super Famicom classic shows that Square Enix knows how thoughtful the developers were with recreating the world. Capturing the beautiful 2D pixel art in the Unreal Engine gives Trials of Mana a shiny, colorful picture book aesthetic and the hyper-saturated shades really come through. Frame dips aren’t present playing on a standard PlayStation 4, but there were noticeable delays in character rendering as armor, hair, and other details took a second to render clearly in cutscenes that featured quick camera jumps from one character to another. 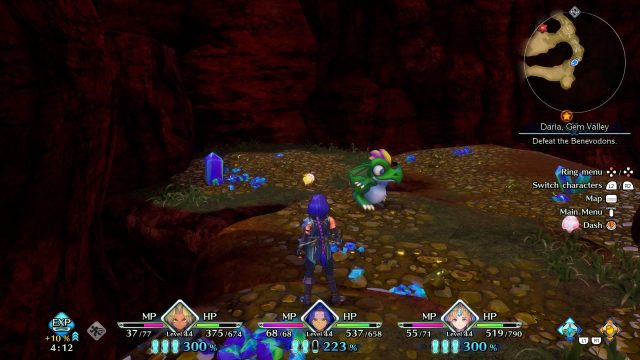 Trials of Mana features an updated, yet faithful reiteration of the combat from Seiken Densetsu 3.

Trials of Mana’s soundtrack falls into the same style of many other modern RPG remakes and remasters by giving players the option to switch between the original 16-bit soundtrack and the remake. The modern arrangements don’t depart greatly from the originals. The music sounds familiar but fuller, reminiscent of going to a record store and picking up the orchestral version of a 1990s or early 2000s video game album. However, while the quality is great, the soundtrack is limited. Listening to the same town theme and dungeon theme quickly becomes monotonous and a little more variety would have been welcome. A majority of the original script is intact and features fully-voiced cutscenes. The English voice acting is serviceable but some lines are delivered in a stilted or overdramatic manner. The Japanese audio track is at least available for those who prefer to avoid the quirky deliveries of Charlotte, Kevin, and some of the nonplayable characters.

Trials of Mana keeps its roots in its real-time combat as well. Party management is an important part of successfully defeating enemies and is very responsive and slick, with players able to switch on-the-fly to any of the three chosen heroes. Some breathing room is given by bringing up one of the two ring menus, which pause the game and give players the chance to assess the situation and cycle through available items. The game pauses, giving players the chance to assess the situation and cycle through available items. A quick pause can be the difference between life and death, especially when playing on the hard difficulty. However, it’s a shame that the game holds the player’s hand for so long. Combat for the first seven hours or so is simply a matter of hitting things with simple attacks and a few dodging mechanics. The fear that the combat system will stay overtly simple with light hits, hard hits, and simple dodges begins to set in, but players who stick with it will be rewarded when class changes become available after the characters hit certain levels and keep progressing. The more the game opens up, the more exciting and strategic combat becomes. 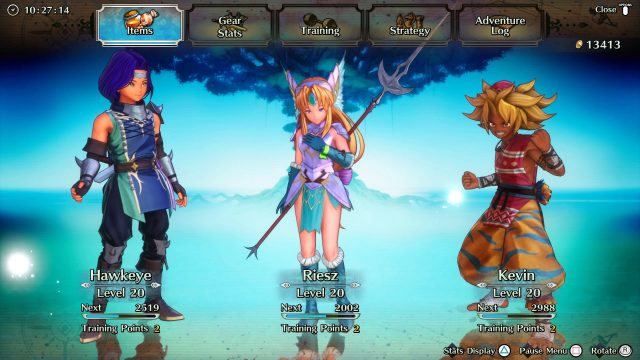 Trials of Mana features six playable protagonists. Each of them comes with different classes and accompanying outfits to choose from.

Where Trials of Mana truly shines is in its creative boss battles. Understanding each of the characters’ roles in the party becomes vital. Is the healer’s stash of items and heal spells sufficiently topped up? Is the damage dealer able to exploit elemental weaknesses? Is the “tanky” character able to withstand an arena-wide, area-of-effect attack? Thankfully the party AI is reliable for the most part. There were times the dedicated healer waited just a bit too long to activate a heal spell, and was knocked out as a result. It is also better for players to use characters’ special attacks manually. There were many times the AI wasted a big attack on a minion or executed it after the boss moved away from the area of effect. Many will find the game’s Normal difficulty to be forgiving, with the Hard setting being where combat really excels.

Square Enix decided to overhaul Trials of Mana’s graphics but leave the overall plot intact. Somber music plays during the introduction video as, according to the lore, the Goddess of Mana drew forth the Sword of Mana to defeat the Benevedons, creatures of destruction. The Benevedons were sealed inside eight Mana Stones, and thus the world was saved. Rebuilding the world left the Goddess weak and she became a tree and fell asleep for a long time. Now, evil forces have come to the world once again and they want to set the Benevodons free in order to take over the world. Peace between the kingdoms is now ending and the seeds of war begin to grow. The Mana Tree has begun to wither and a new hero must come forth and seek the Sword of Mana before it’s too late.

The lore and story of Trials of Mana are very traditional, with twists and story beats that will be familiar to anyone who has played a classic RPG or read a classic fantasy adventure novel. Where it does differ from other games is how players are able to select their hero and accompanying companions. There are six heroes to pick from: Angela, Duran, Riesz, Kevin, Charlotte, or Hawkeye. Each character has an origin story and a story arc that influences the main plot. A lot of heart was put into telling the origin stories, and some have some surprisingly somber moments attached to them. Playing through the game multiple times with different characters is highly recommended to get a complete understanding of the story, but those who want to do a “one-and-done” playthrough need not worry, as it doesn’t affect the main events of the plot. Trials of Mana is a linear affair, as players go to one location and accomplish the requistite tasks there, before heading to the next one. Traveling through each of the towns is a barebones affair; some NPCs deliver a couple of lines that flesh out areas a bit, but there are no side quests or side stories. Talking to some NPCs may unlock equippable skill bonuses or boosts, but it is so rare that the effort to talk with everyone doesn’t feel worth it. 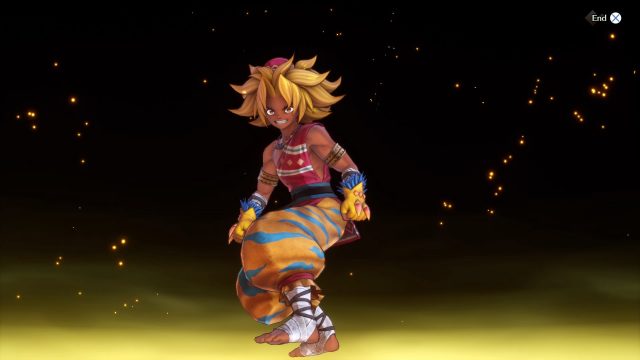 Each of the characters have an interesting backstory for players to explore. Kevin has by far one of the most interesting.

The characters all come with base roles and players will want to take these into consideration when choosing their party at the beginning of the journey. Charlotte acts as a resident healer, Duran as an attention-grabbing swordsman, and Angela as an offensive mage, while Reisz, Kevin, and Hawkeye feel more like hybrid characters. Those aiming to start out with the traditional balance party of a dedicated healer, damage dealer, and tank may want to consider going with Duran, Angela, and Charlotte, but it isn’t necessary for victory.

Character roles are given added depth with class changes. Each class change features two options to pick from — Dark and Light — each with its own abilities and battle techniques. Depending on the character, this will either focus their role or add versatility to them. For instance, Kevin has the ability to become the hardest-hitting member of the party, but can instead exchange some of that raw power for the ability to protect his allies with heal spells and make them more durable. An added (and much needed) perk to the class changes are new outfits that the characters unlock. They’re pretty spiffy and if one of the previous outfits tends to be more to a player’s liking, there’s the option to change the character back to that outfit. 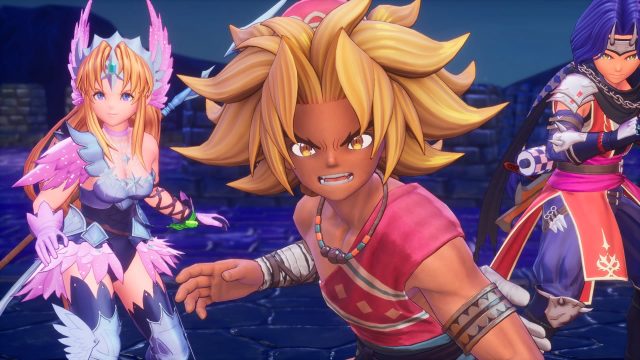 Square Enix used the Unreal Engine 4 to render Trials of Mana’s world and characters. The saturated palette is beautiful.

The remake has added a fourth class option, though this is tied to the post-game epilogue. Avoiding any story spoilers, this section is by far the most enjoyable part of the game from a combat perspective. The experience is quite substantial and gives a rewarding challenge. Dungeon-crawler enthusiasts will relish the creative way that the epilogue takes all the battle mechanics and strategies learned in the main story and pushes players to master them.

Trials of Mana is colorful, quirky, familiar, and a lot of fun. It is a blueprint for how an older RPG can be remade in a way that keeps the charm and working parts of the original but upgrades it so that it is graphically appealing to a modern audience. The game is unapologetically retro in its story and progression. This works as its best quality and greatest detriment. The handholding for the first eight-or-so hours makes for a less interesting experience, especially considering that makes for roughly a third of the entire game. However, even with that early dip in excitement, Trials of Mana is a thoroughly worthwhile game.