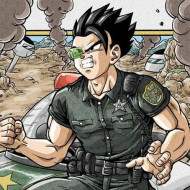 elmondean
Elmon Dean joined RPGamer in 2019 as a reviewer. He has been playing RPGs ever since Dragon Warrior on the NES and even learnt Japanese to play imports. He is also a police officer and the author of the Godshard Chronicles.
This user account status is Approved
About About
Comments Comments

I started with Dragon Warrior for the NES. Then I discovered Final Fantasy, Crystalis, and Destiny of an Emperor. Back then I only owned a few RPGs, so after I completed those, I supplemented my cravings with sessions of AD&D.

My love with RPGs started with Dragon Warrior/Dragon Quest for the NES. I've been playing and collecting RPGs ever since.

I collect mainly the older console RPGs from Japan, which I showcase on my Instagram account. I plan to document them in the future, especially the more obscure titles that were never released out of Japan.

I had taught English in Switzerland and Japan, and currently work as a police officer.

Atelier Ayesha: The Alchemist of Dusk

Banner of the Maid