A Not So Amazing Circus

Developer Juggler Games and publisher Klabater ask an intersting question: what happens when you mix 19th century North-American folk tales with historical figures and bind it together with a deck-building circus performing theme?  Well, maybe that exact question had not been asked before.  It makes for a unique premise in The Amazing American Circus, and with a wide variety of circus performer classes, the combat is a lot deeper than it first appears.  Beyond that, however, there is not much substance to the game as a few production gaffes hold this one back, ending up with a cool idea that falls short in execution.

Players input the first name for the protagonist, who is one of the eponymous Jones in the newly founded Jones and Jones circus.  Inheriting a rundown circus troupe from the will of his father, the protagonist partners with his charismatic drunk uncle Jack, and targets the the cash prize for the best performance in a United States of America-wide tournament.  The protagonist grumbles his way across America, slowly gaining confidence in himself and the circus troupe he’s assembled.  Most conversation is with uncle Jack, a drunk former trapeze artist, and the game is better for it, because Jack is by far the most interesting character in the game and the only one with decent voice acting.  Most of the other characters in the circus get few lines during exposition dumps or bit roles in sidequests, making them feel tacked on.  As the circus’ packed wagons traipse across the continental USA, players come across characters such as Buffalo Bill, P. T. Barnum, Bigfoot, and Nikola Tesla.  Each of these characters are represented by odd dialect choices that make the delivery jarring.

The troupe travels in a big wagon on a map of 19th century USA collecting funds and fame until they are able to challenge for first place.  The player starts in the Northwest, beating a boss than choosing Midwest or South next before ending up in the East for the finale.  After each area’s boss is defeated, the next spot unlocks with no opportunity to return.  The Amazing American Circus uses performances to settle any argument, with conflict resolvable after impressing the opposition enough to agree with the player.  Dialogue options provide some choices to what is being agreed upon, but these are at most one-to-three choices that only change rewards.  The main story is also muddled, with backstory coming in the last third of the game.  Instead of feeling like a cross-country journey with individuals, it is more a collection of short stories that are loosely connected, making everything feel anticlimactic.  Exploring different selections is not easy as the only save feature is an auto-save system that rewrites automatically upon entering a new town. 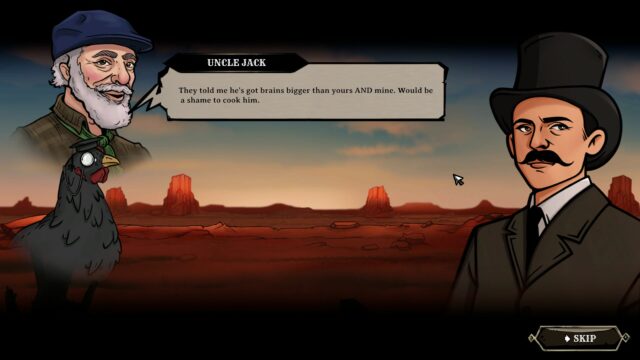 The best performer would just be a delicious stew if Uncle Jack had his way.

Every town the player visits has one combat in it, where up to three playable performers are tasked to delight the crowd in one-to-three act battles.  NPC tokens featuring such characters as the Lizardman, Vampire, or Albino are also chosen to give small boosts to the performers at the beginning of each act.  When the curtain rises each performer has five base cards in their deck, with each card doing a variety of things.  These include impressing the crowd — the game’s equivalent to dealing damage — to ignoring jeers from the audience by making a shield.  These cards are then shuffled and drawn five per turn and every card has two values assigned to it, one for how much vitality it costs and the other for how much it fills the finale bar.  A finale is chosen before combat and is a big spectacle that can do damage or provide perks to the characters.  Playable performers, NPCs, and the finale are all chosen before combat and placed on a marquee poster to draw in crowds.  This is amusing in thought, but in practice the character names can cover the visuals making a cluttered mess.

Performers take damage from audience members that jeer or throw tomatoes, and losing a health bar results in a discarded card.  Reshuffling the deck will also result in lost health, making combat quicker and more urgent.  If a performer loses all their cards they are taken out of combat and battles are lost when no one remains.  Boss encounters can be retried right away, while the fixed regular encounters run on a cooldown that takes moving around the map to replenish.  While traversing the map, players can come across story scenes or random encounters with a dialogue choice that can provide temporary boosts or hindrances to the party.  These just provide a bit of spice and shouldn’t be searched for to help with boss battles. 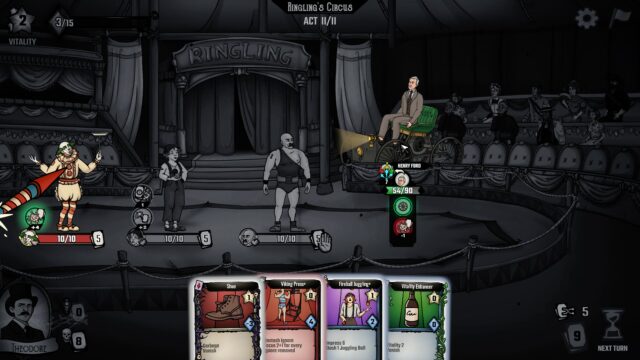 Performing for Henry Ford, and his reactive vehicle that bounces around when impressed.

All classes have different specialties but are not reliant on falling into any one archetype.  For example, the strongman is generally a tank, but he also has abilities that dish out surprising damage and can heal party members.  Characters level up by gaining experience from performances, to a maximum level of eight.  Upon each level-up, players can spend a bit of cash at the training wagon to select from up to three random options to upgrade a card or obtain a new one.  With varied possibilities for each class, trying new ones can be a bit daunting due to the learning curve involved to get used to the new mechanics.  A few classes are not available until late in the game, making it harder to justify testing them because of the potential lost resources or boosts for failing performances.  However, picking favourites is easy as each one is distinct, with examples including a counting chicken with math based abilities and an animal tamer that summons companions to join the show.

Enemy skills also make the game deeper than expected.  For example, one enemy will make a player discard a card from their hand when taking non-lethal damage.  Some bosses can only be targeted by one character at a time, providing variety in this mechanic by having some swap this every turn or after receiving an attack.  These are just a few of the examples of how the enemy interacting with the troupe can make each combat varied and interesting.  In The Amazing American Circus every performance finds a new way for combat to unfold, so even with the same team there are new opportunities to be enjoyed.

Upgrading or recruiting characters is done through wagons at the hub of each town.  One of the wagons is for cooking, which factors into some boons or detriments for the troupe depending on how often food is cooked.  One of these boons allows the player to start combat with extra impress on each performer, while another allows for a free use of a finale in the beginning of a show.  These boons are extremely helpful and easy to maintain as ingredients don’t cost a lot.  After each show, the characters used can gain positive or negative quirks, such as altering the impress, finale, or ignore for the performer, or even affecting their ability to earn funds for the troupe.  These quirks can be locked, copied, or deleted using the voodoo wagon for some cash.  As long as the player has the funds deleting negative quirks does not cost a lot, making it just a nuisance to deal with.  Characters can also receive gifts and hoaxes, which are additional cards that have one use in each performance that can heal discarded cards, improve stats, or cause debuffs on the audience.  Like quirks, hoaxes can also be healed quickly and cheaply at a separate recovery wagon. 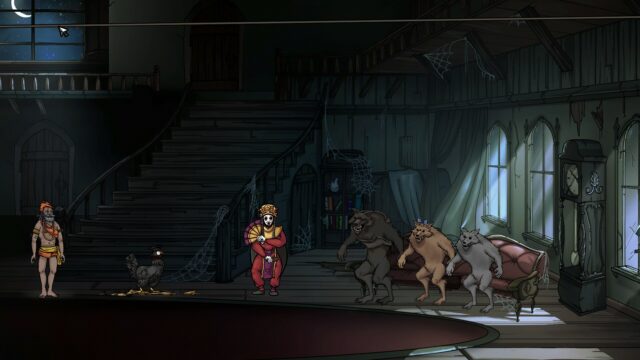 Just performing for a family of werewolves so they won’t eat us before the sun rises.

The Amazing American Circus has some visuals that make the characters distinct and fit within a circus setting, but that’s where the kind words end.  Animations are very limited so a cool sounding ability will have the same casting pose as another that sounds entirely different.  Finales are the same animation over and over so they wear out their welcome despite their usefulness.  Text often has issues staying in its lines, affecting not only the marquee but some of the wagons for upgrade purposes.  The sound design is repetitive but at least sounds like a circus.  The only notable aspect to the music is how it is one of the few games to feature a harmonica, but it is otherwise completely forgettable.  When a story scene starts up on the way to a town, the horse drawn carriage sounds will overlap with the voice acting making it a mess to hear properly.

Making it to the big top is a mechanically sound journey with a lot of great characters to choose and varied enemies making each combat fun.  Unfortunately, the journey to each combat is fraught with graphical gaffes, sound repetition, and story doled out in odd intervals.  Good old Uncle Jack can’t save this from falling out of the spotlight making The Amazing American Circus worth a look only for those that enjoy circus acts or deeper than expected card battlers.  Everyone else can pull away from this mediocre performance.