Tales of Aravorn: Seasons of the Wolf Review

Following the success of its previous foray into fantasy RPGs with the visual novel hybrid Loren The Amazon Princess, indie developer Winter Wolves decided to return to the world of Aravorn with Tales of Aravorn: Seasons of the Wolf. The game, which is available now from the developer’s official website and is set to be released on Steam in January 2015, is very much in the same vein as its predecessor, albeit with a narrower focus to the story. The gameplay has been tweaked slightly for the better, and those who enjoyed Loren will find it a worthwhile follow-up.

Seasons of the Wolf is not a direct sequel to Loren, instead taking place on another continent within its world. The game focuses on a year in the life of Elven twins Shea and Althea, with players choosing one of the twins as their perspective character. Shea and Althea live with their father outside of the snowy village of Ninim, under a rather strict and restrictive upbringing regimen. The village is sustained by merchant visits from the city of Dingirra, which has a monopoly on portal magic, allowing it to easily visit the village despite being a great distance away. Unfortunately, during its latest visit in winter, an incident occurs that leads to Shea, Althea, and their friend Vaelis being taken as slaves back to Dingirra to fight in its arena.

The game’s story is split into four acts, each one taking place in a particular season. The game starts in medias res in spring, before a flashback takes things back to the winter when Shea and Althea were taken. Flashback sequences are common, with each character getting their own, and follow the “show, don’t tell” mantra by including battles and events controlled or influenced by the player. How well this works varies between characters: some feel rather tedious and ineffectual while others add useful background flavour, with later revelations putting a further damper on its effectiveness. Season of the Wolf‘s narrative is easily strongest in its second act, as Shea and Althea gather allies and attempt to escape slave life in the arena. It’s after this point that the significant events that punctuate each season start to feel artificial, perhaps forced by its seasonal act structure, but the coincidences all start feeling a bit too convenient, particularly that which directly leads to the game’s final act. 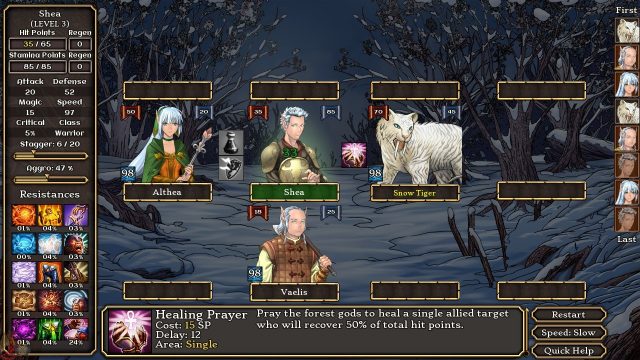 Battle might go faster if the combatants looked at each other.

Those familiar with Winter Wolves’ previous outing know that romantic options are a requirement. This time out, Shea and Althea each has two potential romantic options, one of each gender, with the primary scenes taking place in an appropriately steamy bathhouse. Unfortunately, it can be easy to miss out on certain romances as relationships will need to be increased outside of the bathhouse, and it’s not at all apparent which options will cause a change. There is also a danger of players missing out on particular aspects of the story, with arguably the best and most complete ending reserved for one particular romantic pairing.

Seasons of the Wolf has less in the way of side character conversations than Loren, and while the smaller cast still provides plenty of entertainment, it is more difficult to get attached to them. The story sticks to a focused approach and never tasks the player with saving the world or any other grandiose purpose. It does that job decently without ever reaching a truly satisfying conclusion, and its conclusion in particular feels rushed.

Battles work almost exactly the same way as they did in Loren, with up to six characters on each side slotted into two rows of three. Melee attacks can only hit those in the front row, while ranged and magic fighters can hit anyone but are usually a lot more vulnerable. Various skills can be used by both sides to attack multiple enemies at once, cause various status effects, or heal. It’s a good example of keeping things fairly straightforward but effective, with the speed at which battles go along very welcome. Simply launching into all-out attacks is often a bad idea, and players will need to pay attention to how battles are unfolding, preventing thing from just becoming a click fest.

One of the issues with Loren was how the game lacked any real challenge in the battles. This is one area where Seasons of the Wolf has made a marked improvement, although a perfect difficulty balance is still not in the offing. There are now plenty of challenging battles on the normal difficulty, but these are still punctuated by sections that are still almost trivial. The game’s easily adjustable difficulty allows players to tailor things to their liking, whether they want to get it through it quickly or keep testing themselves, but more consistency within each setting would have been preferred, especially as the boss defeating achievements are tied to keeping it on one of the higher two options. 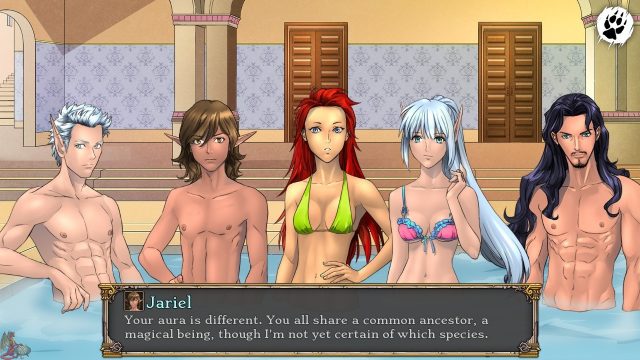 Exploration and moving between various story events is done via clickable isometric maps, although certain areas present optional fights and path choices to keep things from feeling wholly linear. There are plenty of optional side battles within the game, although whether fighting is actually the desired outcome varies between quests, and another nice way Seasons of the Wolf uses its visual novel nature. Character growth is pretty standard, with each level up met with points to spend on attributes while new skills are granted at certain levels. Equipment is less involving than it could be, due to an oversupply of things that are uninteresting from a design standpoint being dispensed throughout the game, but the presence of a break to check for possible upgrades every now and then is welcome.

Much that was said about the visuals of Loren still applies here, with the gist being that graphics do the job without impressing. There are a few minor UI improvements, mostly to be found on the redesigned battle screen, but there is still minimal animation and the isometric location maps are dull. On the audio front, the game’s music is perfectly fine and enjoyable, although doesn’t quite reach the same level as its predecessor, and the minimal in-battle voice acting adds little to proceedings.

If forced to choose between Seasons of the Wolf and its predecessor, then Loren The Amazon Princess would get the nod purely for its more rewarding overall storyline and larger set of intriguing characters. However, Seasons of the Wolf provides a decent follow-up, and those who have enjoyed Winter Wolves’ previous excursions or other visual novels should find it well worth the fifteen to twenty hours it takes to get through. 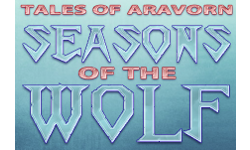