If you have been allured by the latest Persona entries but feel eager to try older Atlus games, an ideal chance to do so has arrived. Almost two decades after its original release, Shin Megami Tensei III Nocturne HD Remaster returns with HD textures, a refreshed localisation, and the addition of Japanese and English voice acting. This revitalized classic presents a top-notch franchise to new generations and old-timers who missed it. Those who have been enamoured by Atlus’ latest releases will connect instantly since many of the iconic elements of the Persona series are also part of the Megami Tensei universe. This is an apocalyptic decision-making turn-based game with a thoroughly engaging story that no RPGamer will regret playing.

The game takes players to Tokyo during the Conception, an event that brings destruction to the world before it can be reborn. Not only is the city curiously fragmented, rearranged, and engulfed by chaos, but it is also now inhabited by lost souls, demons, and peculiar creatures such as Manikins. Controlling the so-called Demi-fiend, a demon with the heart of a high-schooler, players need to traverse the Vortex World (Tokyo’s reorganized districts) and decide this transitory world’s fate. In this demon-ruled reality, players fight fire with fire and befriend many of its denizens on their highly original and captivating journey. Other humans find themselves also trapped inside this demonic revolution and are forced to take a stand after dealing with diverse difficulties, such as being locked inside a prison or being too weak to defend themselves. They all reach different conclusions and assume a Reason, which is an ideal of how the new reality should be shaped, while the protagonist bears witness to how his former friends and strangers transform depending on their recent experiences and their knowledge of the human world. It is fascinating to watch how their visions change them drastically and how they lose their humanity little by little. Each character is developed in a unique way, with a solid emotional evolution, interesting philosophical claims, and well-crafted backstories that effectively show why they reached their Reasons.

The story does a remarkable job showing the pros and cons of the different mental stances, making every Reason seem equally correct and misguided. The leaders of this apocalyptic world also have their own goals, so players need to take sides several times and help or fight those who they see fit. These decision-making moments will affect the outcome of creation and, therefore, the ending of the story, yet players are given the freedom to choose and aren’t pushed into obvious “better” or “worse” endings, since there is no perfect world and truth is a matter of perspective. Regardless of the decisions taken, the mysterious story is full of unexpected twists and is excellent, including complex and varied characters. Players are sucked in and immersed by an obscure mood that is maintained throughout the game. 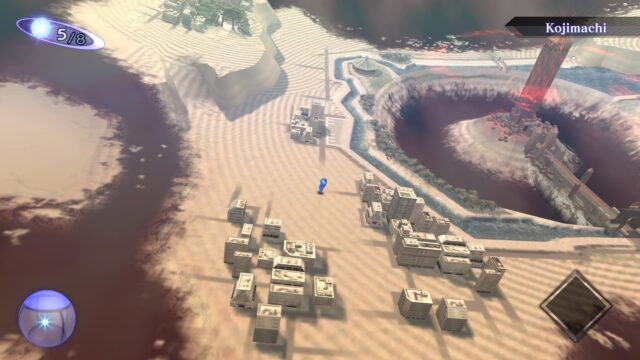 An apocalyptic version of Tokyo, known as the Vortex World, serves as the setting.

Press-Turn battle system, which heavily influences later Persona games, is built around a brilliantly designed turn-based mechanic. Players control the protagonist and have three additional slots to summon demons, with the ability to switch demons during the battle. During the player’s turn, party members act in order depending on their agility, each having one action. Exploiting a weakness or landing a critical attack grants the party an extra action, while missing or being blocked removes one, with the same applying to foes. This makes knowing enemies’ weaknesses a massive advantage as it grants players more opportunities to deal damage. Players can also pass turns to other characters as they see fit, though this consumes half of them in the process.

While this system primarily encourages using of elemental skills to exploit weaknesses, there is a vast array of other abilities, such as physical, healing, passive, and status-affecting, that are just as important. While common foes can be killed even without having a good strategy, bosses force players to use all these skills to survive. The game also includes an auto mode that makes party members attack automatically with a faster pace, which is ideal for battles against easy foes or in previously explored areas where enemies are no longer a threat. It is a delightful battle system that invites players to choose their actions carefully.

Besides killing their enemies, players can add them to their squad or ask them for items or macca (the game’s currency). Demons ask for items, money, and energy, as well as ask tricky questions in order to join the party. Players need to comply with the request or give the answer that the enemy wants to hear, for demons only join those who think like them. Some foes are difficult to convince and require many attempts to recruit; this process, however, can be smoother if other party members have passive abilities that affect the negotiations’ outcome. There are over a hundred different demons to recruit into a limited number of slots, though this space grows a little as the story progresses. Demons can be fused to create new ones, and their abilities can be passed down to their offspring. Collecting demons is a very engaging enterprise, especially if players feel inclined to complete the Demon Compendium.

There is a very interesting feature related to the elapse of time known as Kagutsuchi, an indicator on the top left part of the screen that goes from full (extremely bright) to new (dark). Depending on the phase, the demons’ susceptibility to join the party during battles changes, and the Cathedral of Shadows offers different fusing results, encouraging players to be aware of the different phases. 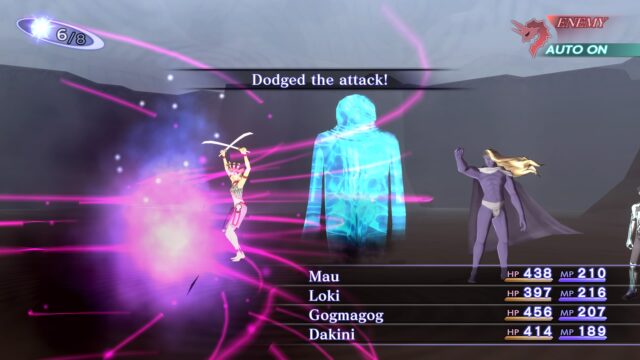 A successful dodge can turn the tide of a battle.

Complementing the excellent battle system is a very simple, satisfying, and effective equipment system known as Magatamas. Only the protagonist can ingest these Magatamas, which are parts of demons that grant him powers. Each Magatama comes with status enhancements, affinity weaknesses and strengths, as well as a set of learnable abilities. It’s an effective system that feels correctly tailor-made for the protagonist in his position as the constant party member; as demons are changed constantly it feels like any system for them would be wasted.

Shin Megami Tensei III invites players to explore. Most mazes offer diversified puzzles where players need to deduce how to advance by using the rules of each place. For instance, some dungeons have invisible portals that teleport the character constantly or have switches that need to be activated in order to advance. Others have dark passages or floors that can cause damage, though items exist that counter these dangers. The map is simple and its use is compulsory since all places tend to have many floors and rooms. Exploring is immersive and mazes aren’t repetitive, yet the number of random encounters can feel excessive at times. Fortunately, there are items and abilities to lower the frequency of these encounters if players feel overwhelmed.

There are other activities besides the main story, such as exploring the Labyrinth of Amala, solving a puzzle game, or facing optional bosses. The Vortex World also contains many items and places of interest that aren’t necessary to advance in the story but that are worth exploring. Districts — or what’s left of them — usually include a Fountain of Life, a place where players can heal in exchange for money; the Cathedral of Shadows, where players fuse new demons and consult the Demon Compendium; the junk shop, a general shop that offers different items depending on the location; and a terminal of the Amala Network, which is used to save or to teleport to other locations. By using the Amala Network, players can fast-travel to previously visited locations, making exploration faster, and are able to reach two very welcome areas: one where enemies drop items that can be sold for a lot of money and another where enemies drop consumables that grant tons of experience. These go a long way towards making farming experience or money an almost painless and not time consuming process. 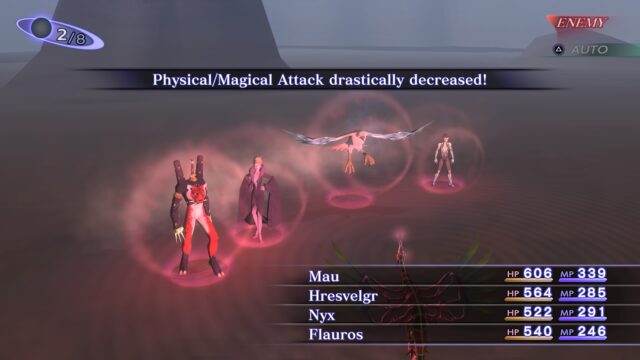 Players can assemble a party of cool-looking demons.

The eye-catching art remains breathtaking, even almost twenty years after the original release. Obviously, the visual detail isn’t at the level of Atlus’ recent games, but the new HD textures keep it from looking outdated. Those who have played Persona games will rapidly recognize the familiar designs of most demons, but the models remain distinctively eye-catching and haven’t aged. The soundscape of this renewed version comes with the addition of English and Japanese voice overs, which fit the game perfectly and take the overall experience to another level. Guitar-oriented tracks are a suitable companion throughout the game, and there is a complementary pack with background music from other entries of the series.

Between the New Game Plus mode, in which players can begin another cycle while carrying over some elements of the first playthrough, and many items that are easily missed, the game encourages several playthroughs. Since there is no need to fix things that aren’t broken or missing, this new iteration’s tweaks are not substantial. A refreshed localisation, additional text languages, a suspended save option, and a Merciful Difficulty (a free DLC that includes extremely easy battles) serve as a bonus and quality-of-life enhancements for newer platforms. It’s perhaps telling that the most drastic change is that players can choose between two secondary characters: Devil Summoner Raidou, included in the normal version, or Devil Hunter Dante from Devil May Cry, included in the Maniax Pack. Both are marvelous as enemies and as allies but don’t affect the main story.

Shin Megami Tensei III Nocturne HD Remaster is the return of a top-class game for new generations and old-timers who want to reawaken their inner demons on newer platforms with some quality-of-life enhancements. It’s a revitalized masterwork full of decision-making in which the only right choice is giving it a chance. In addition, it’s a great starting point for those who want to dive into the Megami Tensei series, which will have new entries soon.