During our visit to E3 this year, Bandai Namco invited us to take the newly-named Dragon Ball Z: Kakarot for a quick spin. Billed as an RPG retelling of the Dragon Ball Z series from the point of view of Goku, the game is a step away from the pure brawler experience, adding several open-world elements that some players may be quite interested in for a diversion from the familiar story.

During a pre-demo presentation, it was explained that Kakarot is not an open-world game, despite some initial appearances to the contrary. As the demo begins, the player takes control of Goku riding his Nimbus, or just flying around the world, with Piccolo in tow. The object of the game is to progress the narrative through story missions visible on the map, but for now I was more interested in checking out what else the world had to offer than heading straight for the mission marker. 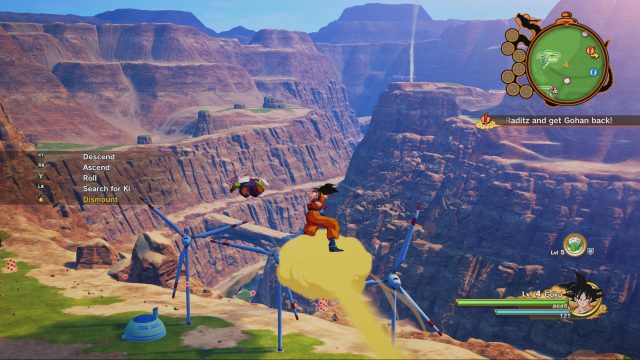 Though the world is large, it is by no means as gigantic in scale as most sandbox games today, proving that the ultimate aim here is to keep the story progressing along. There are some mini-games to fool around with, such as fishing using Goku’s tail as the lure. There are dragons and dinosaurs, and, if nothing else, plenty of orbs to collect by flying through them while exploring the environment, which looks suitably pretty.

Due to having limited time, and the fact that the side activities really didn’t seem to offer much of any substance, I finally decided to ditch them in favor of seeking out an actual battle. This part of story from early in the game, as many Dragon Ball fans would antipicate, is the familiar story of Goku’s true identity. At this point in the game, Goku and Piccolo are seeking out Raditz, who is in the middle of a crater, in order to rescue Goku’s son Gohan from his grasp. 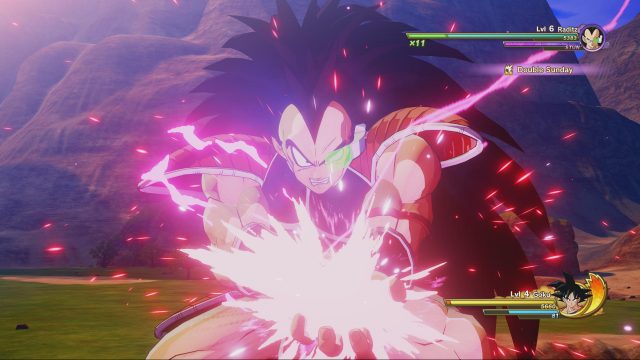 Approaching Raditz’ mission marker triggered a cinematic scene, followed by Goku and Piccolo engaging their adversary in aerial combat. Though the flying controls weren’t the most difficult during the sandbox sections, essentially just adjusting height while choosing a direction, controlling altitude while lining up shots and punches was another matter entirely. The short demo time I had simply wasn’t enough to get a good grasp on the controls, and the end result was a mad, button-mashing frenzy, with Piccolo shouldering most of the hard work. Even so, I got the feeling that the game’s combat is no simple feat, and wearing down opponents will provide series fans with a decent challenge.

The graphics, on the other hand, looked great and cartoony, as they should for the series. Dragon Ball Z: Kakarot is releasing in early 2020 on PC, PlayStation 4, and Xbox One.