Back in the early 2000s, the fate of the Shenmue series seemed bleak. Sales of the first game were less than stellar, and the second game’s original Dreamcast version only saw a release in Japan and Europe before Microsoft brought it to the Xbox. Shortly thereafter, the series went on hiatus with no plans for future releases. Yet, eighteen years after the last instalment and following one of the most successful Kickstarter campaigns later, Shenmue III has dug the series out of the grave and back to life on PlayStation 4 and PC.

The story takes place exactly from where Shenmue II left off. Leaving his homeland of Japan, Ryo Hazuki has set off for China to hunt down his father’s murderer, Lan Di, and discover the secrets of the Phoenix Mirror. As he travels through China to find clues, he trains and studies under various marital arts masters and helps those in need along the way. Players can view a movie that summarises the main events of Shenmue I & II, but unless they played through the prior games, some of the references in the third game will be lost. Ryo’s grand journey continues in the same manner as his previous two adventures as he meets new people, practises new techniques, and learns a little more about the history of his father and Lan Di. The narrative feeds the players a bit of juicy plot only drops at a time, but this adds to all the other drops from the previous games to fill a bucket of epic proportions, though the amount of fluid this game provides may not satiate fans who  have waited through the eighteen-year drought. 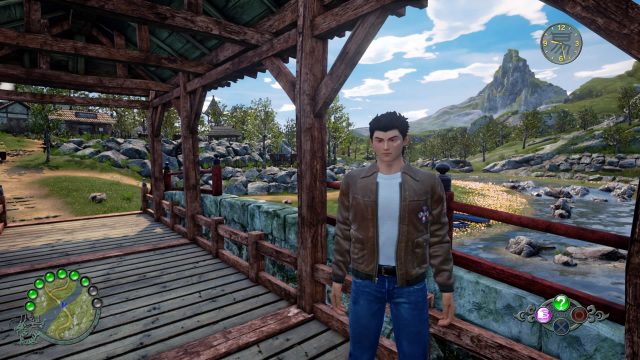 The scenery of Shenmue III is gorgeous to say the least.

For better or for worse, the gameplay retains the exact same formula from the predecessors, which includes investigating, training, fighting, and gallivanting around with part-time jobs and mini-games. Players will spend the majority of the adventure investigating clues and exploring the surroundings to advance the plot. This occurs at a slug’s pace as some searching yields little to nothing, and even discovering the next objective usually does very little to move the plot along. Actual fighting, which is the highlight of the game, occurs very sparingly in the story, much less so when compared to the predecessors. Some of these fights and other action scenes revert to the outdated Quick Time Event, or QTE, prompting players to press a sequence of buttons correctly. This system is frustrating, as the QTE prompts do not give players enough time to react, leaving them to memorise the correct sequence of buttons, and even then, they may not be able to press the button in time. This shortcoming is made much more frustating given that the QTEs on the Dreamcast’s Shenmue were much more refined. At least the game allows for infinite do-overs during these events, and failing means players can watch some humorous scenes of Ryo floundering or getting walloped.

Combat plays out a little differently from the predecessors and relies more on RPG-style stats, such as Ryo’s strength, endurance, and kung fu level. Although these attributes will not solely determine the outcome of a fight, not training them is akin to coming to a fight under-levelled by typical RPG standards. Players can increase these three stats by training at dojos or sparring with various martial artists. Some of these training endeavours consist of simple mini-games where players can mash the X button at the appropriate time.

Speaking of mini-games, several of the ones found in the previous games return, such as the ball-drop and QTE arcade machines, but there are some new ones such as turtle racing and a Virtua Fighter clone. The lack of the Sega arcade games found in the previous games is remedied to a degree by the introduction of Chobu-chan, which is a small bird that is hidden in each shop of Niaowu, and searching for it resembles ‘Where’s Waldo’ due to it being camouflaged amongst the shop’s goods. Searching for Chobu-chan is strangely fun and addicting despite its simplicity, and finding them earns Ryo a specific ticket for that shop. Players can redeem these tickets for highly useful skill books, making Chobu-chan one of the best and useful mini-games of the series. 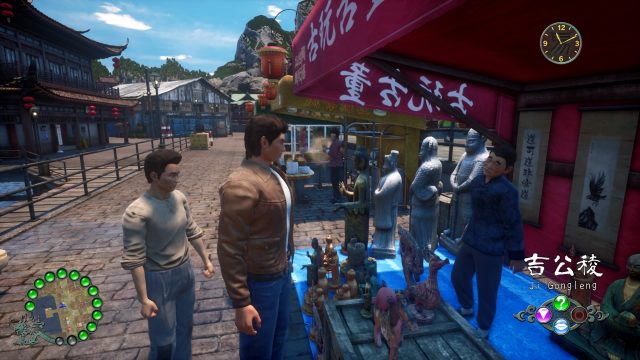 This vendor has a Choubo-Chan hidden amongst his wares.

Not all additions are good, however, as Shenmue III introduces the need to eat food. This new mechanic constantly depletes Ryo’s stamina, only draining slowly when he’s doing nothing, but draining very quickly when he runs or indulges in a physical activity such as fighting. This wouldn’t be much of a hassle, but stamina is the equivalent to health, meaning running around the city depletes Ryo’s health the same way as getting punched or kicked. In essence, exploring punishes the player. To further add to the frustration, if Ryo’s health runs low and he gets into a fight, he will be a pushover even for the weaker enemies. Sometimes, the game recommends that Ryo eat food before a fight to replenish his strength, but some fights come as surprises, and Ryo doesn’t get the luxury of preparing. Therefore, Ryo must constantly consume food to restore his stamina, and to get food, he must earn money by gambling or working part-time jobs. Thus, the grind for stamina only serves as a time-consuming obstacle with no reward. It’s a frustrating mechanic that wasn’t present in the previous two games, and there’s no reason for it to exist in this one.

Of course, the graphics received a substantial overhaul, displaying a beautiful world to match Yu Suzuki’s original ambition. The scenic locations of Bailu Village and Niaowu look impressive and full of life, and even the interiors of houses look detailed right down to the stationery inside a random drawer. These details can only make one wonder how attractive the first game would have looked in such a light. In contrast to the scenery though, the character models vary in quality, with some looking almost as archaic as the characters on the Dreamcast hardware, and in some cases downright ugly. Not all character models look horrible, but the quality of their design sometimes pales in comparison to their surroundings.

Perhaps the most charming aspect of the Shenmue series is the depth of freedom allowed when Ryo explores his surroundings. Most NPCs have a name and a lengthy script of dialogue for each time Ryo advances the plot. Players can also open drawers in houses and shops, and though most of their contents will yield nothing but mundane household items, it’s still a nice feature absent in many other open-world games. These trivial details have persisted since the first game, and it further deepens the game’s immersion in a way, giving players the atmosphere of actually traipsing through Bailu Village in China, interacting with the locals, and looking at insignificant trinkets and toys. Yet, such time-consuming interaction, especially when it’s crucial to advance the plot, may turn off players used to a fast-paced game. 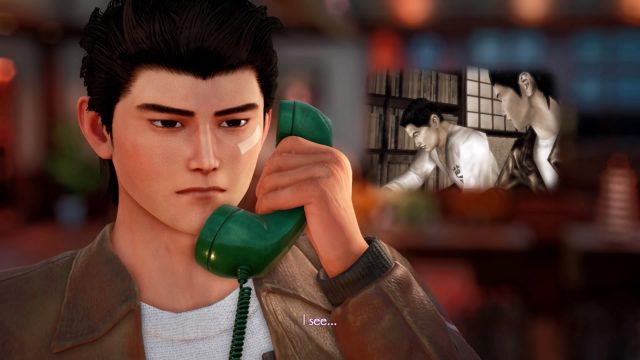 Calling the characters from the first game is a great feature, but it’s also sad.

The sound quality of the game is mixed. Most of the music is extremely repetitive, exceptions being during key cutscenes, but players will mostly hear the same few tracks loop over and over again as they traverse the fields around Bailu or the streets of Niaowu. Some tracks from the previous games make a return here and there, and their placement feels subtle and fitting rather than recycled and overused. The English voice acting retains much of the quirky quality of the predecessors, meaning the overall quality resembles a humorously dubbed martial arts movie from the ’80s. Furthermore, some of the cycled responses sound out of place. For instance, Ryo will give an awkward response of ‘uh, hi’ to a question or comment. On the other hand, the Japanese voices sound much better as a whole and flow more smoothly, and the aforementioned awkward responses are absent. Unfortunately, most of the voice actors for the other returning characters are replaced in both the English and Japanese versions with the exception of Ryo Hazuki’s, voiced by Corey Marshall in English and Masaya Matsukaze in Japanese, whose performances are exceptionally well done.

Players coming to Shenmue III will find neither a fast-paced plot nor an action-packed story. Instead, they will pour many hours into mundane things and accomplish very little for their time and effort. But that is the point of Shenmue. That is its greatest strength and weakness: to pass time doing the insignificant things while enjoying what’s around them. Fans of the previous games will love the third instalment, and those who disliked the previous two games will not find anything here to change their minds. This game shamelessly and unapologetically retains the old-style gameplay in spite of two decades of new developments in the game industry. The magic is still there, though diminished to a degree due to a few poor design decisions, mainly in the broken QTE and food systems. But this was a game for the fans and by the fans, and Shenmue III is a labour of love that offers more fan service than any other game out there without compromising its integrity. Hopefully, Yu Suzuki can finish this series one day and give fans the entire story they deserve. 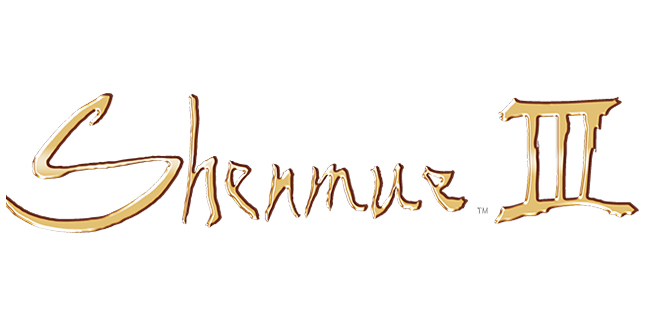