Sakuna: Of Rice and Ruin Review

Well, it’s happened. After forty years, I’ve finally played my first farming RPG. It’s not a subgenre that particularly interests me, so it has never drawn me in to give it a try. But when Edelweiss’ Sakuna: Of Rice and Ruin came knocking and needed a review, by golly I answered. And you know what? It wasn’t half bad, and certainly not as off-putting or tedious as I’d been afraid a game that forces the player through an in-depth rice cultivation process in place of a traditional leveling system would be. In fact, the farming aspects turned out to be pretty painless and easy to manage, though the game did still shoot itself in the foot at least a little by cramming what felt like a large amount of padding onto its end, causing it to outstay its hard-earned welcome.

Simply calling Sakuna: Of Rice and Ruin a farming RPG is a bit misleading. Sakuna herself is the child of the harvest goddess Lady Toyohana and the war god Lord Takeribi, and much like her, the game is made up of equal parts rice farming and action combat. Exiled to the Isle of Demons after blowing up some food stores in her native Lofty Realm, home of divine creatures, Sakuna is tasked with ridding the island of the demons that have infested it while watching over a group of humans who had snuck into the Lofty Realm and have been exiled along with her. She is also a bit of a spoiled brat, which colors many of her early interactions with the pesky humans whom she blames for her misfortune and gives her character an arc to grow towards.

One of the game’s greatest strengths is the way in which it bounces back and forth between its action gameplay and farming segments quite quickly, making sure that, for a long time, neither activity becomes the overwhelming focus. The game follows a day/night cycle, with each day lasting a little under ten minutes of real time. While it is possible to venture forth at night, there are incentives to follow a regular schedule: Sakuna will only complete certain farming chores during the day, and monsters become incredibly more dangerous under the cover of night. Initiating a nightly dinner sequence and resting up also have their advantages, manifested via temporary stat bumps and beneficial buffs. The routine quickly feels natural, and the quickness of this cycle allows the player to slip into a “just one more day” zone. 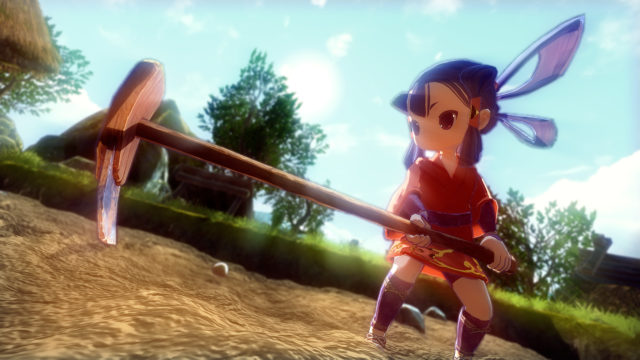 There are lots of ways Sakuna can literally get her hands dirty.

With the passing of each three-day cycle comes the changing of seasons and inclement weather patterns, and the game places special importance on each of them even as it aesthetically alters all stages to reflect them. Though the icy winter, for example, doesn’t alter how the action stages play out, adhering to a sensible seasonal schedule is important in order to get the most out of the yearly rice crop. There is an elegant simplicity in how the development team has found a way to keep the player involved every step of the way during the in-depth crop cultivation and yet made it incredibly user-friendly to keep up with. All stages of the crop cycle — tilling and fertilizing the soil, planting the seeds, regulating water volume and temperature in the paddy, harvesting, drying, and hulling — can be accomplished with but a few simple button presses, and should the player not feel like investing the time to commit to whatever step is at hand, they can, no pun intended, farm the work out to one of the humans in their camp, at the expense of a slight dip in crop quality.

And having a good harvest is very important in Sakuna: Of Rice and Ruin. In place of a standard leveling system that awards experience points for defeating enemies, Sakuna grows stronger each time she successfully brings in a new harvest of rice — so once a year — and the benefits she receives are directly proportional to the quality of that year’s harvest. Other than that, however, new weapons and gear can be occasionally fashioned by the camp’s humans if Sakuna gathers the requisite materials on her travels. Likewise, a number of sidequests and new pieces of advanced farming equipment require materials to be provided first. Even Sakuna herself becomes more adept at farming, unlocking new skills that allow her to harvest faster or plant more seeds at once, for example, the more she participates in each activity.

Devoting the necessary time to rice farming is absolutely vital, as the difficulty of the action stages would otherwise eclipse Sakuna’s prowess rather quickly. As the game begins, only a handful of island locations can be visited, with more unlocking as the player accomplishes predetermined objectives in each and raises the exploration level. These include straightforward objectives like killing a boss or mining a certain amount of ore in a stage, but others are more finicky, like finding carefully hidden items or defeating tougher enemies at night. The goal in each of the island’s four regions — forest, river, volcano, and the enemy fort — then is to clear as many of each stage’s objectives as it takes to unlock new zones and, eventually, find and defeat the region boss. This then drives the story forward to its next chapter. Despite farming revolving around the seasons of the year, there is no set amount of time each region must be completed in, nor a limit to how often individual stages can be replayed to accomplish previously missed objectives. Thus, there is almost always a feeling of progression in the action side of things. 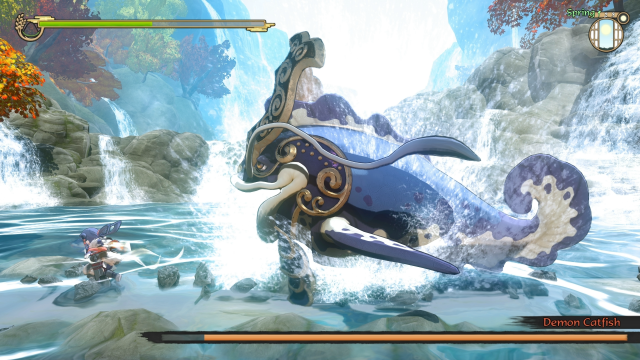 Boss battles are few and far between, but fun and well designed.

From a gameplay perspective, the action is fast-paced and fun. Sakuna runs and jumps her way through the 2D stages, using her divine raiment (a magical shawl passed down to her from her mother) to assist with some occasional tricky bit of platforming by latching onto walls and rocks and pulling her across. The raiment also comes into its own during combat, where it gives Sakuna a way to swing around an enemy and attack them from the opposite side, sometimes letting her bypass defensive shields or avoid incoming attacks. Enemies often depend on the strength of superior numbers, though the few bosses and sub-bosses the game has are well designed and require a more careful approach to best. Several stages are also designed around the proverbial ticking clock of the amount of daylight, and have the added tension of needing to make it through before night falls and the enemies become insurmountable. However, death can be forgiving, as it fully replenishes health and resets both the stage and the time of day to give the player as many fresh shots as they want; stages can also be exited without penalty at any time via the menu, making it more convenient to dip back into a stage just to collect an item and leave again.

Even though the general gameplay loop is fairly enjoyable and motivating to stick with, the game does feel like it’s ready to wrap things up at the twenty-hour mark, after all four zones are cleared. Unfortunately, what is telegraphed as the natural end is anything but, and the game instead needlessly bolts on another eight to ten hours of story, combat, and farming, including rehashes of each of the bosses and mandatory revisits to a number of cleared stages. Though the story during this time does manage to be engaging, it just ends up feeling like mandatory padding at a point where things seemed ready to be resolved. Other content, like a 100-floor challenge dungeon, are more welcome additions for the simple fact that they are optional. 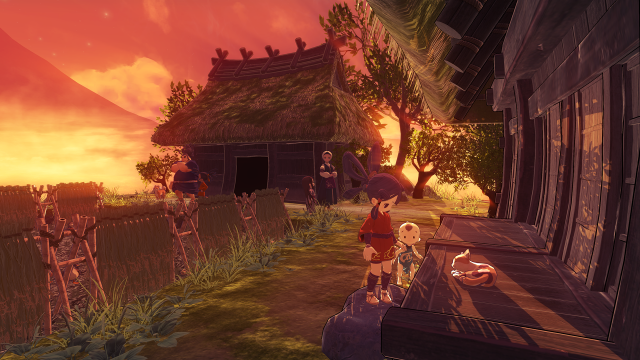 Sunsets and sunrises make for some rich visuals, and that’s just the beginning.

The game does boast commendable production values. Stage designs aren’t terribly original, but they do feature a good level of detail with unique backdrops for each location. Back in Sakuna’s home area, things are a little more stylized with bright uses of color that are at their best when they reflect the changing time of day. The story is told through a multitude of fully-animated in-engine cinematics, with memorable character designs for each of the half-dozen or so main characters. A good portion, though not all, of the game’s dialog is also voiced, and the actors all do a fantastic job. Music fits the game’s mood well, with lots of authentic Chinese music performed on what appears to be traditional instruments, which, especially during the farming sequences, can be very zen and tranquil.

Despite some early mistrust due to the game’s agricultural aspects, I ended up enjoying my time with Sakuna: Of Rice and Ruin — at least the first two-thirds of it. It wasn’t breaking any new ground gameplay-wise, with combat that was just enjoyable enough to make up for its repetitive nature. The narrative was decent, though those looking for a deep storytelling may dislike the aimless self-motivation the game requires of its players. The farming aspects are so simply integrated that they only added to the overall experience, never detracted. What did take away from my enjoyment in the end, however, was the sudden and severe prolonging of the game, just when the credit roll started to feel inevitable. It’s a solid and certainly unique game that can be quite enjoyable when approached with the right expectations.