With RPGolf Legends looming large, I fired up the original RPGolf on PC to see how it played. It was feature-light and not interesting for longer than an hour or two. Fast-forward a month and I’ve spent a dozen or so hours with the sequel. It is a good sequel in that it builds on the original in almost every conceivable way, yet it still falls short of living up to its title, being neither legendary nor a deep RPG nor even a good golf game.

RPGolf Legends begins with the female protagonist, Aerin, just wanting to play some golf. Unfortunately all 54 golf holes in the world have been sealed with energy shields. Luckily a ghostly golf club, Clubby, appears to help her unseal the courses. To open each hole, first the previous hole must be completed, then local animals need a good whacking with Aerin’s equipped golf club to fill an energy meter and unseal the next hole. 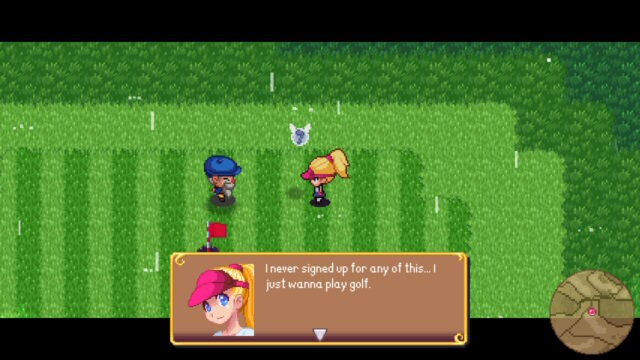 The story progresses as Aerin journeys the world, unlocking 9-hole courses outside various towns. Each town has a bevy of NPCs to talk to, with plenty offering various sidequests. These sidequests rarely rise above fetch quests or kill ‘X’ number of animals, but they typically offer good rewards, including materials for the light crafting system the game offers. A couple towns into the game, a job system opens up, but unfortunately it’s shallow enough that the addition feels like nothing more than a device to move the plot along and open up new areas rather than being useful in battle or on the greens.

Combat in RPGolf Legends is simple: swing golf club, hit enemies. There is no magic, and the job system does nothing more than add an additional swing or two to the combo. The entirety of the battle system involves hitting animals, then dodging their attacks, and moving in for another hit. There’s a slight delay between tapping the attack button and the swing completing, so it takes a bit of timing to master the system, but once players have it down, gameplay requires nothing further to be mastered. Outside of a couple of equippable items that boost stats or prevent certain status ailments, there’s not a whole lot to purchase, craft, or equip. One can slowly purchase better golf clubs, but without significant grinding, funds for these aren’t easily obtainable. Boss battles can be a bit of a standout in combat mechanics but only once players reach the midpoint of the game. After about half the holes have been played, the battles become a little more strategic and require small tricks in order to do damage. However, even this midgame improvement comes with the stumble of the tricks being poorly telegraphed and a great deal of trial and error that may leave gamers frustrated after failing multiple times to even score a single hit. 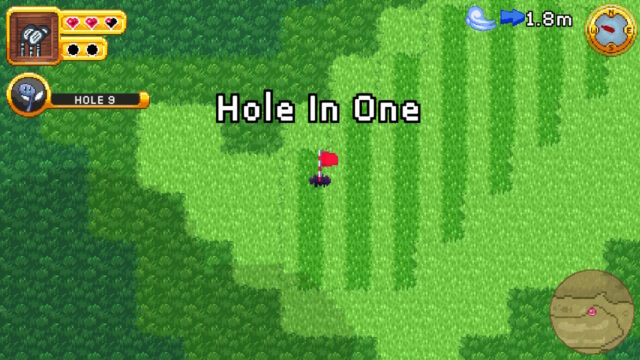 Early on, it’s easy enough to nail shots like this.

The golf in Legends at first seems to be a strength of the game. It’s a two-click system where players aim their ball and then swing, clicking once for power, and again for aim. The simple system is easy to learn and then quickly master. The first course or two will fly by with no real challenge, but this is lulls players into a falsely thinking they’ve got an easy road ahead. The entire game is 2D, so there are no elevations or sloped greens to shoot around; it’s as basic as golf can get. As the game progresses, the challenge goes up, but by quite annoying means. Eventually, some courses bend around themselves such that completing some holes requires the player to cross over one fairway or bunker from a previous hole. If players hit the ball onto a portion of a hole they’re not currently playing, it’s considered out of bounds. While understandable, there’s no color change or visual delineation between which bunker belongs to hole X and which belongs to hole Y, so if players aim for a specific spot, they might be aiming for an out-of-bounds area without realizing it. In addition, wind speed increases as the game progresses. They can grow strong enough to add or remove up to 40% of the distance. Such wild swings can leave some holes near the end of the game impossible to complete depending on which way the wind blows.

While most systems in RPGolf Legends seem serviceable rather than standout, one highlight is riding around in golf carts. In each town, a pro shop sells new equipment and rents out golf carts. For a fee, players can hop in a golf cart and go tearing across the environment for a limited amount driving time. The cart is fast, and while it doesn’t handle very well, it’s fun to zip across the overworld, doing donuts on the greens, and flying past much slower enemies. That said, it would be even better if the player could attack enemies by running them over or knocking them around. Unfortunately, instead of mowing them into roadkill, enemy contact causes damage to the golf cart itself. Four such hits and the rental ends prematurely. 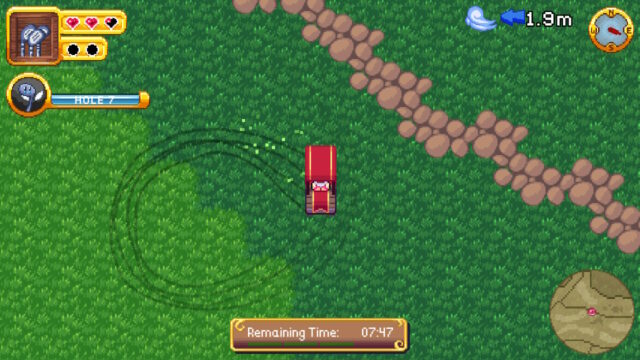 Doing donuts in the golf cart is one of the most fun gameplay elements.

Aesthetically, RPGolf Legends sticks to what works rather than taking a chance for something greater. The pixel art looks good and works well for what the developer seems to want, but it’s about average for what smaller indie developers are creating these days. Similarly, the soundtrack and sound effects are serviceable and pleasant without being memorable in any way.

RPGolf Legends is leaps and bounds above developer ArticNet’s original title and features a bevy of perfectly average game systems. However, all these average systems lack any standout hook for the game to hang its hat on and set itself apart from the indie pixel-game scene. This leaves the whole game feeling less than the sum of its parts. While the game wasn’t a standout for me, it was such an improvement that I’d be interested to see if they can take another large step forward in future titles.