Since their first appearance on the Game Boy over 25 years ago, the main Pokémon games have maintained a fairly unchanging linear path of progression.  There’s an argument to be made for ensuring the cohesion of a long-running series, but I’ve always found it’s the experimental games in the Pokémon franchise that interest me the most.  Yet when Pokémon Legends: Arceus was announced, I wasn’t convinced it would be for me; in still screenshots and curated videos, it was hard to tell if the new gameplay loop would feel different enough from the traditional turn-based mainline games.  However, with a quick jump into the action, an engaging gameplay loop, and oodles of freedom to progress forward any way the player wishes, Arceus creates an experience found nowhere else in the Pokémon series.

One of the smartest decisions made is starting players with just enough information to engage with the mystery, ensuring gameplay immediately takes centre stage.  The overarching premise is simple: the player has fallen through time and space to a point in the past, before Pokémon and humanity lived in harmony.  The player’s fearlessness in the face of three escapees from the resident Professor intrigues the local populace and quickly gaining the new hero their usual task of catching ’em all, with a twist: completing the Pokédex no longer simply involves catching each species, but studying them in a variety of ways.

Once players get outside of Jubilife Village, the game’s single hub, there’s a big wide world to explore.  Trainers are able to run, ride certain notable Pokémon, or stealthily skulk about.  Sneaking up on Pokémon to capture each unawares or coax one towards you with items is a fun new twist to the Pokémon formula and creates an engaging experience found nowhere else in the franchise.  Completing a Pokédex entry encompasses a variety of actions, including feeding a species a certain number of times, battling and catching a certain number of times, using specific moves, and using strong or agile moves a certain number of times. 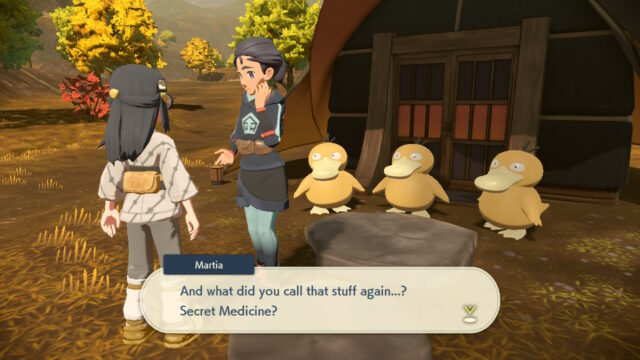 Many side quests have a direct callback to the original Diamond/Pearl storyline.

To further flesh out the story beyond the simple goal of acquiring a bevvy of new research material, players are tasked with tackling a variety of side quests, which highlight the burgeoning relationship between people and the local Pokémon.  While in general this is an excellent system that continues to make the world feel real and lived in, some quests lack adequate direction and NPCs fail to provide helpful reminders or follow-ups to them.  However, this small flaw does not take away from the otherwise engaging plot, and while the overarching story is constrained by having to fit into the existing Diamond and Pearl mythos, it does a great job expanding into a believable tale within those limitations.  The story has excellent pacing, moving players along without feeling rushed, and leaves ample room for exploration between storyline beats.

However, there’s no getting around the elephant in the room: Arceus’ visuals often struggle to deal with environmental effects, including windy days making the grass in each region completely freak out.  There’s a large variety of new clothing items for trainers to select from, but most of these outfits get given a disappointing plastic sheen during rain or snow.  Inclement weather can also drastically affect the game’s draw distances, which are small even under the best circumstances.  Thankfully, the Pokémon models are appropriately cute, funny, or scary, but it’s disappointing to see a Switch title with this graphical many issues.

On the other hand, the music is pleasant and does a great job setting the game’s mood.  Players who have experienced the original Diamond and Pearl duo, or played the Brilliant Diamond and Shining Pearl remakes will hear many influences from those games, and yet Arceus manages to express its own musical identity while staying within these themes.  Despite hearing many of the same thematic elements, even over the forty or so hours of gameplay, none of the overworld themes wear out their welcome.  Beyond the music, the sound design remains the consistent high quality found throughout the rest of the series, with one standout addition of the firecracker effect and sound for when trainers catch Pokémon, which makes these small victories feel and sound sweet every time. 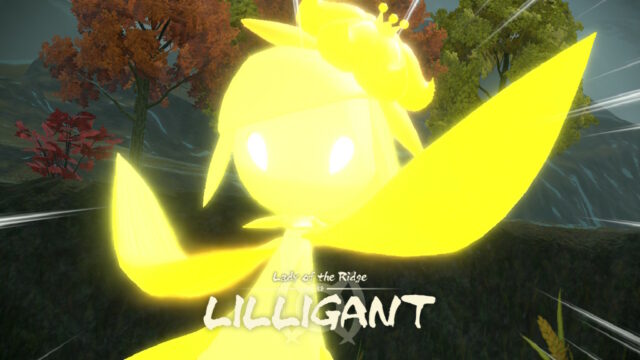 Hisui’s Noble Pokémon are out of control due to a rift in space-time.

Taking place in a time before modern gyms and badges, progression in Arceus is instead gated by two key factors: Noble Pokémon, and an ever-increasing Galaxy Expedition Team rank.  Calming a Noble Pokémon, essentially the boss or guardian of each locale, is required to progress from area to area inside the Hisui region, later to become known as Sinnoh. These Noble battles are an awkward mix of classic Pokémon battles and frenetic action sequences, where trainers will need to dodge incoming attacks while tossing healing balms at the frenzied boss Pokémon.

Unlike mainline Pokémon titles, it’s rough living in the Hisui region, and there are no Poké Marts to solve all a trainer’s problems.  Instead, items must be crafted from materials scavenged from around the various zones, including berries, minerals, and plants.  Rival trainer fights are few and far between, so Pokédollars are instead earned by continuing to report new information to the local Pokémon-crazed Professor.  As players continue to explore and fill out their Pokédex, their Galaxy Expedition Team rank fills a similar role to badges, ensuring Pokémon up to a certain level will always listen to the trainer.  In addition, ranking up also unlocks additional crafting recipes for more advanced items, such as improved Poké Balls, healing items, and more.  Crafting is a lot of fun and is another reason to explore zones far and wide, though some materials could use a better distribution.

That isn’t to say gameplay doesn’t have some concerning foibles, notably in organization; the player’s bags in Arceus are quite small, and trainers must pay to increase their bag size one slot at a time, with rapidly increasing prices that quickly get out of hand.  Furthermore, despite encouraging players to capture and retain many Pokémon, including repeats of the same species, there’s no way to organize a quickly growing collection, and the one search tool that is somewhat helpful also isn’t colourblind friendly.  Although players are encouraged to and rewarded for releasing excess Pokémon that won’t be used, it is time consuming to determine which among a huge collection are worth retaining. 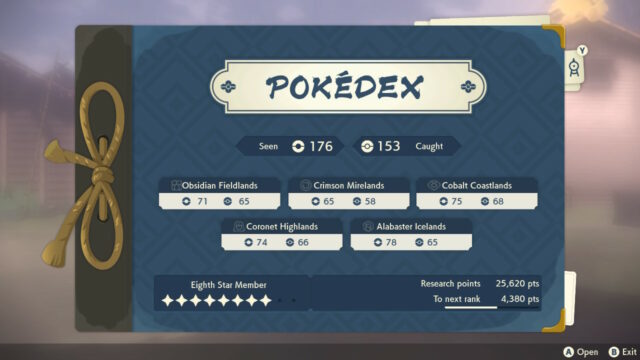 Finishing this Pokédex will require much more than just catching ’em all.

Once into combat, Arceus doesn’t stray much outside of the single-action-per-turn Pokémon basics, with small but incredibly versatile changes.  A turn order is displayed at the top right of the screen, and depending on the speed of each Pokémon taking part in the battle, a single Pokémon may receive multiple turns in a row.  All Pokémon have one or two elemental types that, as usual, play a major part in battle for deciding move effectiveness, and also determine some of the moves they can learn through either levelling up or being tutored by a battle master in town.  Additionally, a Pokémon’s moves can be freely changed outside of battle, allowing players to customize their strategies based on immediate needs; this is particularly freeing, as it means being able to put utility moves like False Swipe on key party members, without being forced to live with that choice during important battles against powerful foes.

One small but critical gameplay twist added for Arceus is the concept of strong and agile moves; once a Pokémon has mastered a move, it can use additional power points (PP) to weaken a move in order to act again sooner, or to increase its power at the expense of acting again later.  This opens up a whole new level of strategy.  For example, using a stat-lowering move like Baby Doll Eyes in agile style will lower the rival Pokémon’s stats less, but can then be quickly followed up with a strong style move which targets the foe’s weaknesses, landing a devastating blow.  This is particularly helpful when tackling Alpha Pokémon, which are larger and stronger versions of a Pokémon that come with increased base stats, unique moves, and fulfill special capturing conditions in the Hisui Pokédex.

Ultimately, Arceus is a fun title that does an excellent job rewarding all facets of the Pokémon experience, which will undoubtedly end up flying past a lot of RPGamers who would enjoy it because of embarrassingly poor graphics.  For those willing to tolerate the mediocre presentation, an entertaining experience is here for the taking.  Hopefully, further experiences in the Legends style will be quickly forthcoming.