Of Orcs and Men Review

Not the Best Laid Plans

French developer Cyanide made a splash with its initial forays into the realm of medieval fantasy RPGs when it managed to secure a partnership to create the Game of Thrones RPG. Looking to back up this early effort, Cyanide has followed it up five months later with the release of Of Orcs and Men. Developed in conjunction with Spiders, Of Orcs and Men sees the usual fantasy roles reversed; players take control of an orc and his goblin companion as they seek to save the orcish people from the human menace. Unfortunately, the game fails to live up to any of the potential that such an interesting concept generates, leaving a severely underwhelming experience.

Of Orcs and Men takes place at a time when the human empire is on the rise. This rise has brought harsh times for the orcs and goblins; the orcs are suffering from a protracted persecution with enslavement awaiting those lucky enough to survive battle, while goblins are seen as little more than vermin. The main character, Arkhail, is a veteran member of the Bloodjaws, a feared group of elite orcish warriors, who is given a mission to exact revenge for the humans’ systematic destruction of the orcish culture by killing the Emperor himself. In order to do this he needs the aid of the goblin Styx, whose contacts can get Arkhail deep into the human empire and within striking range of its leader. 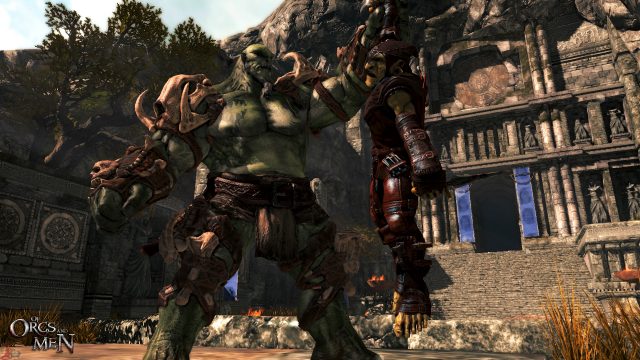 The idea of a story from the point of view of the orcs, firmly placing the humans as the major threat, is an interesting one. The story starts off quite well with its first two chapters giving an early indication of depth and showing that both sides have multiple faces and that it isn’t quite a clear-cut orcs good, humans bad situation. However, this depth quickly vanishes after the game’s second chapter. At this point everything becomes rushed and the game gives players no reason to stay tuned in. Some plot twists were shoved into the story, but they are not set-up well enough beforehand, fall flat, and are entirely forgettable. The end result is a story that underwhelms and feels like a waste of a good concept in what turns out to be a sorely underdeveloped world.

Arkhail and Styx complement each other quite nicely with their fighting styles: Arkhail concentrates on raw melee power while Styx relies on stealth and striking with speed or from distance. The battle system itself feels a bit like Dragon Age: Origins-lite; combat takes place in real-time, but players can slow time down to queue up to four skills from a radial menu. The two protagonists each have two different fighting styles that can be switched between freely, and skills associated with each style. Arkhail can choose between an offensive or defensive melee stance, which affects how quickly his rage meter builds up. When his rage meter fills Arkhail goes into a berserk mode that increases his attack power but removes all player control and he will happily attack Styx if he gets too close. Meanwhile, Styx can switch between using his daggers or hanging back a bit and using his throwing knives. Styx doesn’t have a rage meter, but makes up for it by being able to turn almost invisible so he can sneak behind and assassinate a number of guards before the rather large orc enters the fray and puts them on guard. The battle system is fine in and of itself, but isn’t enough to carry the game its own, and unfortunately the rest of the game fails to provide nearly enough support.

Every now and then the two characters will both raise a level, which provides one point for each character to use upgrading or learning skills and another to spend on an attribute. It adds an occasional bit of variation to the usual task of running down corridors that makes up the vast majority of the gameplay, but there isn’t much depth and players will be able to unlock all skills by the time the game is complete. The game does include a substantial number of sidequests in the first couple of chapters that help bring a bit more interest and depth to those sections of the game. While the sidequests themselves aren’t especially memorable, following the same corridor-travelling format of the rest of the game, they do at least give a bit more background to these story sections and keep them interesting. 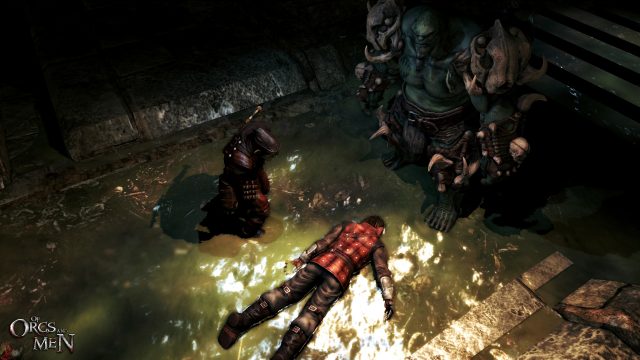 Not many RPGs feature the protagonist as the biggest combatant.

Unfortunately, by the time players get into the rushed second half of the game, all optional sidequests have been exhausted, and the rest of the game becomes an uninteresting charge through various corridors. There is very little to experience outside these corridors, with nothing in the form of an overworld or settlement, and the only respite is given in the two tiny rest areas occasionally used in the early sections to hand out sidequests. The lack of content is further demonstrated by the speed the game can be completed, with a single completion easily attainable in under fifteen hours even after taking on the available sidequests. There is little reason to return to the game after completion either, except to maybe gain one of the very few trophies that require a different decision and aren’t freely handed out.

Both the game’s visuals and music are functional but nothing memorable. It does the job with no specific issues or problems, but everything just feels very generic. Those who like darker, grungier worlds will enjoy the visual style but there remains very little to set it apart. The game’s voice acting is very much in the same mediocre vein (obviously not helped by the uninteresting story), although the voice acting and narration from Styx does provide one of the game’s very few highlights.

Of Orcs and Men joins the list of games that have failed to deliver after some early promise. This is a pity as the concept of a game examining the point of view and culture of those fantasy races that would traditionally be shoved into the role of the antagonist forces without a second thought is an appealing one. Unfortunately, Of Orcs and Men squanders this opportunity and the result is a mediocre, all-too-short experience that won’t live long in the memory.