All Paths Lead to Happiness

While turn-based RPG enthusiasts made Octopath Traveler a hit of the summer of 2018, going so far as to cause multiple printings of the game to quickly sell out in Japan, and becoming RPGamer staff’s Most Played RPG of 2018, the overall structure and length of the game made it one that relatively few played to completion. Late to the party, just purchasing a Switch in spring 2019, Octopath was not only an instant buy, but quickly addictive. With engaging turn-based combat, beautiful graphics, and all the classic JRPG nostalgia one could ever hope for in a modern game, more than sixty hours flew by in a heartbeat thanks in large part to the episodic nature of the game.

The story of Octopath Traveler begins where players choose to start it. With eight main protagonists, each as important as the next, players can kick things off with any character’s story they choose. After the first chapter of that story is complete, players can choose to continue on to the next chapter in that character’s tale or move along and find other party members. The main game of Octopath Traveler seemingly has no single overarching story; rather it’s a collection of eight short stories that don’t overlap. Each of the eight protagonists progress through four chapters of their own story, with scenes playing out with only the protagonist of that story present, regardless of the current party composition. Players may have a party of up to four characters with them at any one time, but for story purposes, the game is very much about singular storytelling, chapter by chapter. For players that don’t have massive blocks of time to devote to gaming, this works very well. The individual chapters are well-paced, with very few ever taking more than two hours. For those looking to play a complete chunk of story every night before bed, Octopath Traveler perfectly delivers with thirty-two bite-sized tales.

Structurally, Octopath Traveler’s story is designed to be different from most other RPGs, and that is evident in the presentation as players explore the world. Character’s chapters begin and end with short summaries, which is extremely helpful as it may be a dozen hours in between connected plot points if players choose to go through all eight paths. Similar care is taken in visually pointing players in the right direction. During each chapter, locations of NPCs to talk to or areas necessary to explore to advance the plot are highlighted in green on the small minimap located in the corner of the screen. Unfortunately, the same markers are not used for the sidequests in the game. There are plenty of sidequests, but oftentimes they are overly vague and require players to have excellent long-term memory or a detailed guide to, for example, connect the lonely actor encountered in Ophelia’s third chapter to the eager playwright met in Primrose’s first. However, it’s a small weakness in an otherwise well-signposted game.

While some players may dislike the lack of cohesive narrative in the main game, the eight shorter stories told are great. Murdered kings, ethical dilemmas, nobles sold into human trafficking, jaw-dropping betrayals by friends and family, and other JPRG tropes are all represented in the tales told, and most characters experience real growth and changes in personality as their stories progress, something that really helps to bring the characters and game world to life. Even the NPCs that inhabit the land have interesting stories to share and are worth chatting with to experience the effort made at world-building. If, by the end of the game proper, players are still left wanting for story, a cohesive post-game that is hinted at in many characters’ final chapters is available to play. 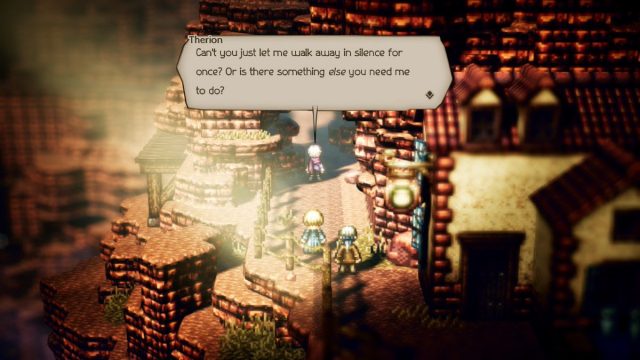 Yes! Come back and play the post-game, Therion!

Developed by members of the team behind behind Bravely Default and Bravely Second, Octopath Traveler‘s job and battle system share many similarities with its 3DS predecessors. Each of the eight main characters begins as a different class such as dancer, thief, warrior, etc. with unique talents that can be used in battle, such as stealing or monster capturing. Jobs also have a pool of secondary battle skills that can be learned through the expenditure of Job Points earned after every battle as well as support skills that are learned based on the number of battle skills unlocked. As the game progresses, players will encounter job shrines that allow characters to subclass to another character’s job. While the job’s base talent cannot be learned via subclassing, the entire pool of secondary battle skills can be, although they are only available while the character keeps the selected subclass. Conversely, any support skills unlocked are permanently available to characters. It’s quite possible to have Ophelia the cleric subclass as a scholar to access the elemental attack spells while equipping the merchant’s support skill that cuts spell point usage in half. Party builds are highly customizable very early on and get even more so later in the game when four powerful hidden jobs become accessible, although these are locked behind some of the game’s toughest boss battles.

The finely-tuned job system sets the stage for one of the most enjoyably pure turn-based battle systems. Broken into rounds, players can see the turn order of their characters and all enemies for the current and next round at the top of the battle screen. When it’s a character’s turn, they attack, defend, use an item, use a job skill, or access their battle points. Battle points (BP) are a commodity that build up with each round of combat and allow characters to either power up spells and skills, or use them multiple times in a single turn. Utilizing these is critical, because the second major aspect of battling is enemy shielding. Enemies have specific elemental and weapon weaknesses as well as a shield icon with a number inside it that decreases each time a weakness is hit. If an enemy’s shield drops to zero, its turn is forfeited in both the current round and the next. This mechanic is crucial to exploit for bosses as shield-broken enemies have lower defensive stats, and parties can do massive amounts of damage by saving their BP to both break and finish off broken enemies quickly. These two systems work in concert to take a standard old-school turn-based battle system and make it fresh by making each encounter a strategic chess match of sorts, with players testing to see enemy weaknesses and counting the hits it will take to break them at specific points in rounds. 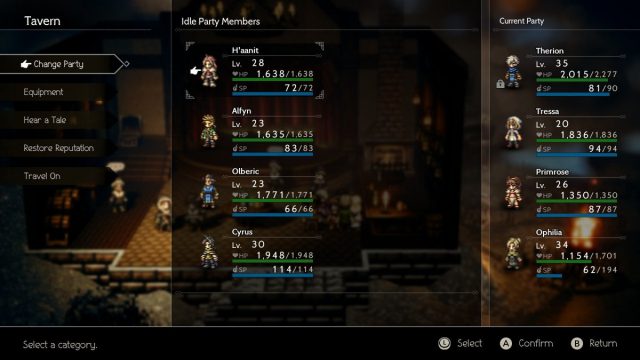 Taverns are the place to go to switch party members or perform a variety of other small management tasks.

Not only does Octopath Traveler offer eight characters with eight different job classes to experiment with in battle, each character has unique skills to be used on NPCs outside of combat as well. While half of the NPCs in any given town might as well be part of the background and cannot be interacted with, the ones that can often have much more to them than a line or two of dialogue. Various characters are able to recruit these NPCs as temporary party members, steal from them, challenge them to fights, or learn more about them. Besides the obvious benefits of recruiting and stealing, challenging an NPC blocking a doorway to a fight can open new locations for exploration, and learning about NPCs reveals not just a beefy paragraph of their life history, but often enough provides the location of hidden items, or opens up discounts at the inn or expanded merchandise at shops. Most skills come with a percentage of success, and repeated failure lowers the party’s reputation in town to a point where NPCs will not interact with them. Conveniently, each city’s bartender can be bribed to spread enough positive gossip about the party to have the townsfolk forget past transgressions.

Graphically, Octopath Traveler is hard to define but easy to appreciate. While the characters and locations feature some of the most beautiful 2D pixelated graphics one could imagine, the overworld and dungeons play out in a semi-3D space with characters able to move from the foreground to background as well as left to right. There are multiple layers of scenery for characters to explore in front of and behind, giving the impression they’re moving around in a shoebox diorama straight out of an elementary school student’s book report. While this may seem a bit odd at first, Octopath Traveler nails this art style with small nuances like trees shifting in the breeze, clouds casting shadows on the ground, or the focus shifting to make the foreground or background sharper or blurrier depending on where the characters are located. Special note must be given to the lighting and water effects which just stand out in each and every scene that they appear in; they’re more breathtaking than any game in this style has any right to be. Sadly, the same level of detail isn’t applied to enemy design or naming conventions. While many RPGs employ palette swaps to make new ones every so often, Octopath Traveler takes this to the extreme. One might encounter a battle against two birds called Cliff Birdian I and Cliff Birdian III that look exactly alike except for the small weapon in their claws only to fight the next battle in the same area against Cliff Birdian II and Cliff Birdian IV, with V and VI waiting just another dungeon away. While each enemy typically has some unique set of resistances and attacks, the very limited graphical difference and naming convention make it a noticeable weakness in an otherwise very detailed game. 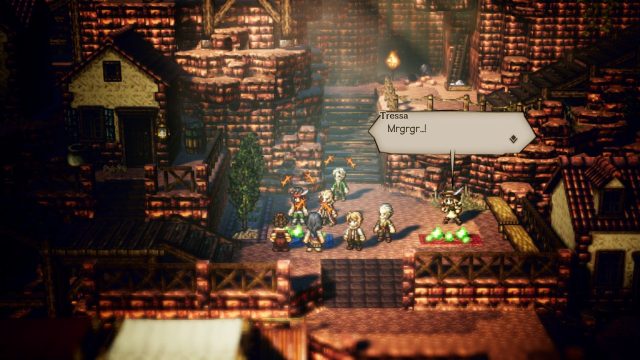 Yasunori Nishiki’s score for Octopath Traveler is quite the amazing, expansive selection of composed music. Clocking in at over eighty tracks, with themes for all of the characters and various regions in the game as well as battle and dungeon tracks, there’s quite the wide variety to listen to. The characters’ individual tracks seem to encompass their jobs and personalities while the overworld themes beautifully meld with the environments they’re written to accompany. The battle theme is the track players will necessarily hear most often and is most definitely exhilarating and catchy enough to hum right along to both while playing and after putting the game down. Voice acting is present during important scenes in each chapter and is very well done. The various accents and styles of speech fit beautifully with the personalities of the various characters and NPCs.

While those looking for a deep, story-heavy RPG might find Octopath Traveler lacking, the game is a hugely enjoyable modern take on traditional turn-based games of yesteryear with a collection of short story, rather than novel-length, narratives. The graphics represent the pinnacle of pixel art and the score is amazing. This game was pretty much a system-seller for me and well worth every penny and hour spent with it.