No Place for Bravery Review

It’s getting to where it’s hard to shake a proverbial stick and not hit a 2D action RPG inspired by “a certain other” franchise. Not that this is a bad thing: stamina-based dodge/parry/hit mechanics can make for some intense combat, and developers have plenty of tricks up their sleeves to keep their games from feeling derivative. Enter Glitch Factory’s No Place for Bravery, a pixel-art take on the familiar formula. Unfortunately, in this case, combat doesn’t manage to satisfy, and a less-than-ideal optimization (at least on Switch) further underscores the swing-and-near-miss that this game represents.

The game follows Thorn, a grizzled warrior and former member of an elite group of protectors known as the Guardians, who has now hung up his sword in order to run a tavern and raise a family. However, tragedy strikes one day while Thorn is out hunting with his daughter Leaf, and she is abducted right in front of him by a mysterious sorcerer. After many years of searching, Thorn has lost all hope of ever finding Leaf again, until an unexpected clue puts him back on the sorcerer’s trail. Along with Phid, the young boy he’s since adopted and raised as his own, Thorn embarks on a desperate mission to rescue and avenge his lost daughter, or die trying.

It’s a universal motif that lets players immediately identify with Thorn’s plight and understand his actions even when he comes off as callous towards others. He’s a man clinging to any shred of hope of finding Leaf again and the years between have left him desperate enough to sacrifice everything for even a slim chance of getting her back. Thorn is apathetic to those around him, whether it’s his town being invaded by monsters, an old friend asking for his help, or his wife giving him an ultimatum that she will leave him if he doesn’t let go and move on. In fact, the game even presents a handful of false endings, complete with credits, where players are given a choice to abandon their quest and let Thorn settle down in peace. Were the characters or narrative even just a bit more fleshed out, Thorn would be a notable tragic hero. 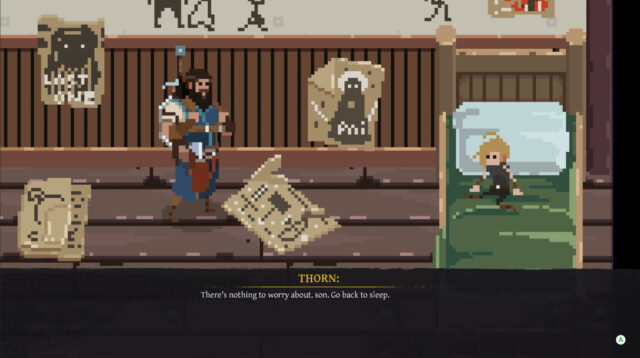 Being a devoted father and successful tavern keeper are at odds with Thorn’s war-torn past.

A clear highlight of the game is its well-written lore, masquerading as item descriptions, in the form of notes, anecdotes, legends, and folklore. The game scores points for the lore being presented in a refreshingly direct fashion, and learning about the world’s history and theology, for example, goes a long way toward making it feel more fleshed out and real. However, when it comes to the telling of Thorn’s own story, some cracks begin to show. Story beats often feel disconnected from the world around them, making it feel like many events occur in a vacuum, divorced from context; it sometimes feels like some planned aspects didn’t make the transition into the finished game. While the world seems intriguing, the game leaves far too many opportunities for fleshing out its narrative on the table, choosing instead to rely on the intensity of the action-heavy combat to make up for any and all storytelling shortcomings. Spoiler alert: It doesn’t.

No Place for Bravery borrows enough common action RPG elements to make it feel instantly familiar but places a far heavier emphasis on dodging. Parrying blows is possible but requires lightning-quick reflexes to react to color-coded attacks that inform the player whether they can be blocked, parried, or must be avoided. Even then, it feels like there is a lot of cheap, unavoidable damage, as players neither get the opportunity to pull out of attack animations nor interrupt those of enemies. The combat routine amounts to darting in close using Thorn’s dash ability, dishing out damage, and either retreating to a safe distance or frantically trying to deal with the enemies’ hits. Additionally, the developers have designed a good number of combat arenas with gaps and pitfalls, shoehorning a platforming element into the combat experience that feels far from smooth. Over the course of the ten-hour quest, Thorn receives two additional weapons to complement his trusty sword, though these are more practical for navigating the land than useful in combat: the large war hammer can break through enemy shields as well as destroy some obstacles in the world but is slow and ponderous to swing, while the repeater crossbow can target far-off switches and provides a ranged attack option in the game’s latter stages. 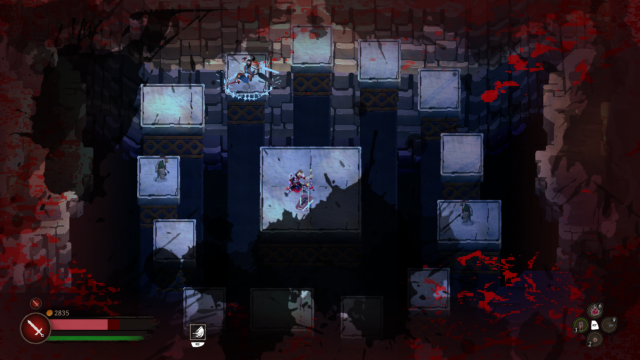 Combat doesn’t feel smooth, and combining it with platforming just increases the punishment.

However, pulling off such a fast-paced action combat system requires a level of finesse that No Place for Bravery simply doesn’t bring to the table. Enemies rarely come alone, and squaring off against multiple enemies at once often means Thorn ends up taking a lot of damage, even when playing defensively, making deaths uniformly cheap and frustrating. This is exasperated by larger enemies, which add an element of attrition as accompanying smaller enemies still chip away at Thorn’s health bar. With a more finely tuned system, dashing in and out of hit range might have worked better, but since damage feels almost unavoidable, one may as well stay in close to continue to dish out the hurt. Even the repeater crossbow, which could offer some solace from many of these issues, has its own problems once players realize that its auto-targeting option can’t be cycled between targets at will. More than once the game locked on to an enemy that was behind a barrier, and with no way to switch targets the crossbow became effectively useless for that encounter.

One contributing factor to combat feeling choppier than it should is the less-than-ideal optimization on Nintendo Switch. Whether in docked or handheld modes, the system has trouble handling too many moving objects on-screen at once, particularly if particle effects are involved. Even when simply running through the more peaceful parts of the game world, the frame rate will sometimes drop noticeably and appears to have trouble keeping up with Thorn’s pace. It’s hard to accept that the visuals on display should be this taxing for the Switch, especially as more graphically demanding games work capably on the console. 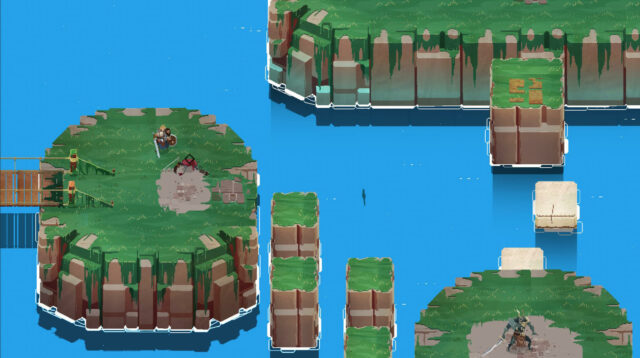 The game world can, at times, look like a nice place to explore.

The pixel art graphics themselves are hit or miss, being at their best when depicting the large-scale environments Thorn and Phid must travel through. Subterranean caves, mines, moody forests, and frozen snowfields feature animated elements that look good in motion, though are occasionally a bit too busy for their own good. Characters also look passable at the game’s normal zoomed-out field of view, though the frequent close-up zooms cause faces to become difficult to read and actions to get lost in translation. Most character and enemy designs don’t stand out, though the savage execution animations Thorn sometimes performs on dazed enemies are a nice touch. No Place for Bravery features some lovely battle hymns, performed by deep-pitched choirs in foreign-sounding languages; it’s epic, mythical, and suits the game’s mood to a tee. These tracks stand out at first listen but quickly grow repetitive, and with no voicework there’s little else to keep this particular boat afloat.

In the end, No Place for Bravery lives or dies based on the strength of its combat system. Other aspects like its graphics, music, and storytelling are passable without being outright noteworthy, but an action RPG must nail its combat, and here the game falters. With multiple issues all undermining the core battle mechanics, the game’s overall lasting impression is easily soured. Just like its protagonist, No Place for Bravery attempts to swoop in for the kill but ends up getting routinely smacked in the face instead.