Shortly after the release of Monster Hunter Rise, Capcom announced a full-blown expansion, which promised to add master rank quests along with new monsters and challenges. A little more than a year later, Capcom released Monster Hunter Rise: Sunbreak. With two new areas to explore, over a dozen added beasts, fresh wirebug moves, and a new mission type, Hunters have plenty to do to keep them busy for many more hours.

As an expansion, Monster Hunter Rise: Sunbreak requires the original Monster Hunter Rise to play. The story picks up shortly after the end of the base game, with the Hunter enjoying leisure time in Kamura Village after successfully repelling various rampages of monsters and elder dragons. Unfortunately, the Hunter receives a call to action only a short time later as a Daimyo Hermitaur shows up to wreak havoc in the shrine ruins. While fighting it off, an unknown, vicious monster shows up to turn the tables on the Hunter. Thankfully, Fiorayne, a knight from Elgado, rushes in to assist. After driving the beast away, she shares that she arrived to recruit the now famous Hunter to help the town of Elgado, which faces waves of monsters crawling out of a huge pit that opened up near the town. The elder of Kamura accepts and sends the Hunter to new adventures in this faraway land.

Once in Elgado, players will get to meet a new host of smiling faces. The new NPCs have a lot of personality, aside from the admiral who rarely cracks a smile. Yet, as before, the overall plot and story feel paper-thin, barely providing enough motivation to move forward and hunt monsters. Thankfully, cutscenses/cinematics featuring the Hunter make a return. These exciting sequences go a long way to making the player feel like a part of the action. 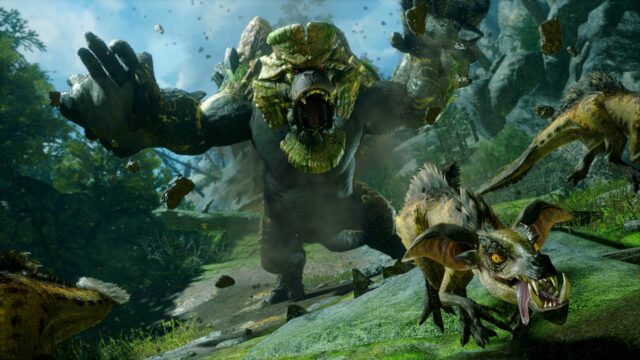 There are no villager quests in Sunbreak, leaving only hub quests. As before, hub quests can be challenged solo, with friends, or with random partners via the matchmaking system. Multiplayer works similar as before, with all of the same restrictions in place. Only four Hunters can enter a hub together, meaning larger parties must create separate groups. During the review period, a failure error would pop up sometimes while setting up a quest. However, a second attempt to post the same quest immediately afterward always worked. Thankfully, the multiplayer worked flawlessly in all other respects and the overall experience was enjoyable.

Solo quests tend to feel harder than co-op quests as monsters have fewer units to target, even with the additional Palico or Palamute assisting. Yet, this does not always have to be the case thanks to a new feature added in Sunbreak. For the first time in the series, follower quests allow players to go on hunts with AI-controlled NPCs from both the base game and the expansion. The NPCs fight similarly to players, attacking the monster, healing when needed, and occasionally blinding a monster with a flash bomb as it retreats. Sometimes, the NPC will leave for a minute to find another mountable monster and bring it back to help take down the target. This feature is well executed overall and provides an enticing way to farm certain monsters. Unfortunately, the follower quests available do not cover all monsters, so solo Hunters still have some beasts they must fight with only their pets by their side.

Plenty of new adventures await Hunters. Well over a dozen additional monsters have been added to Sunbreak’s bestiary including classics like Espinas and Gore Magala along with new creations such as the shape-shifting Lunagaron. Overall, it feels a bit light for an expansion, but Capcom plans to add more soon. It should also be noted that many of the monsters featured in Monster Hunter Rise now feature Master Rank variants with completely new move sets. They fight with renewed determination and ferocity at Master Rank, helping to keep Hunters on their toes. Yet, for those who prepare, the fights rarely feel overwhelming. Indeed, out of the gate, Monster Hunter Rise: Sunbreak may be the easiest of recent Monster Hunter expansions, though post-game variants and additional monsters released in the future promise to provide plenty of challenges for veterans of the series. 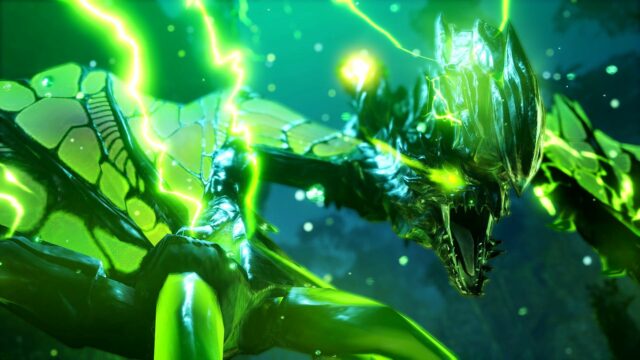 To help spice things up, two new battlefield lands have been added. The Jungle has beaches surrounding a tropical paradise. A system of caves in the center contains valuable minerals and bones. Far to the north, an abandoned temple holds secrets and makes an excellent area to fight. Meanwhile, The Citadel has poisonous swamps that lead to the ruins of an old castle, with plenty of nooks to explore. On the north side, snowy mountains lead to a grand plateau where epic battles can take place. Both areas feature plenty of verticality and fit right in with the other areas introduced in the base game.

Monsters attack more viciously than before, but now Hunters have more ways to fight back. New abilities have been added to every weapon class, and every area has new endemic life. Hunters can now perform a Switch Skill, allowing them to quickly swap between two sets of chosen skills. This alone opens up new approaches. For example, the insect glaive has a new Switch Skill which allows the Hunter to dive forward and perform a Vaulting Dance while absorbing extract in the same move. Great sword players can now use the defensive Strongarm Stance, which causes the hunter to quickly charge the great sword for a punishing counterattack when hit by a monster. The sheer number of new combinations means Hunters can spend hours experimenting with each weapon.

The new expansion also adds new armor and decoration skills. Blood Rite converts some of the damage dealt into health when striking a monster’s weak spot. Bloodlust kicks in when in the presence of the frenzy virus, boosting damage resistance and stamina, but at the cost of slowly draining health. These new skills, along with the returning ones, allow players to creatively build sets that complement their playstyle. And while a great variety of customization currently exists, Capcom has stated they will be adding another layer with content patches in the near future. Similar to movesets, Hunters have a wide variety of skills to combine to suit their playstyle and take out tougher challenges. 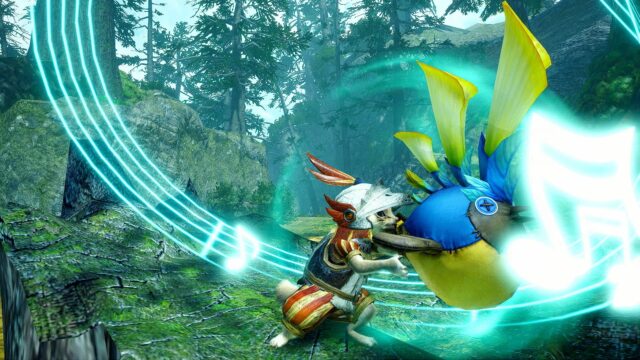 You will need your buddies’ help more than ever!

From a graphical perspective, Monster Hunter Rise: Sunbreak meets the high bar for performance set by its predecessor, while looking quite attractive. As before, the frame rate holds steady through the experience regardless of the action. The new areas are exciting to explore and monsters have distinctive appearances with some belying their true power. Music during fights feels appropriate and changes as the battles ebb and flow. Some monsters have individual themes, portraying appropriately the danger they represent. In particular, the ending song of the game with its excellent vocals evokes emotions in a game with little in the way of storytelling.