What Once Was Lost…

Doing justice to the overall feeling of a game like Lost Sphear without comparing it to some of the most beloved classic RPGs of the 16 and 32-bit eras is almost impossible. In fact, Tokyo RPG Factory would probably welcome such comparisons for its sophomore offering; the studio’s previous effort, I Am Setsuna, aspired to similar heights. But Lost Sphear outdoes its predecessor in every way, a great testament to a studio listening to critical feedback even as it adheres to its core design philosophies. The game is steeped in that smooth zen-like nostalgia you feel when character designs, gameplay, music, graphics, and combat system gel so well you can’t help but smile.

Lost Sphear‘s plot can be summed up in a brief, generic blurb that could easily be copied and pasted onto at least half of all JRPGs. “Mysterious-slash-unfortunate youth from a small village discovers he has innate powers, just as events occur around the world that require these powers to be utilized. Youth gathers a group of friends, and ends up becoming the world’s savior.” While this same cookie-cutter template applies to Lost Sphear as well, it doesn’t really do the moment-to-moment storytelling justice. The designers have tapped into the mysterious power angle to provide a unique and engaging gameplay hook. For reasons no one knows but everyone accepts, objects and people — whole towns, in some cases — have started to literally disappear, leaving behind impenetrable white fog. By collecting enough memories about them, Kanata, our lead, has the ability to summon these lost things back into existence. Before long, his talents become known to the empire’s military officials, and he and his friends are recruited into their ranks to assist on special assignments. The random and unknowable nature of the disappearing phenomenon is helpful in sending the narrative in different directions rather than following a predictable path, just as it breaks up grindy dungeon runs with the occasional reveal of a secret item or path forward.

While Lost Sphear owes much to the titans of yesteryear, it is in many ways also a product of Tokyo RPG Factory’s previous effort. Not only do a few enemies make repeat appearances, but the battle system, which previously worked well but was saddled with unnecessarily complex mechanics, has been expanded upon. This time around, however, there is enough breathing room given to each new mechanic to make the whole experience much more comfortable and user-friendly. The turn-based combat once again features the Momentum Mode, where a character adds some extra oomph to an attack by using one of the charges on his or her Momentum gauge. Combat can be tweaked in a variety of ways by equipping special items known as Spritnite. Appearing in three varieties — Skill, Counter, and Momentum — Spritnite can be paired up in a plethora of combinations to uniquely influence combat. For example, pairing an air-based Skill Spritnite with the Air Down Momentum Spritnite lets a character launch a wind attack that simultaneously lowers the enemy’s wind resistance even as it connects, enabling a much greater effect in combat. Learning how to create targeted Spritnite combinations can sway the flow of battle significantly, and is key in many boss battles that can otherwise be overwhelming. While important, having to micromanage Spritnite setups for all right characters to ensure an optimal effect for each possible use can be daunting to do once, let alone each time a new heavy calls for a unique approach. With so many equipment screens and weighing the pros and cons of one character receiving a Spritnite versus another makes it tempting to leave everything untouched until absolutely necessary. 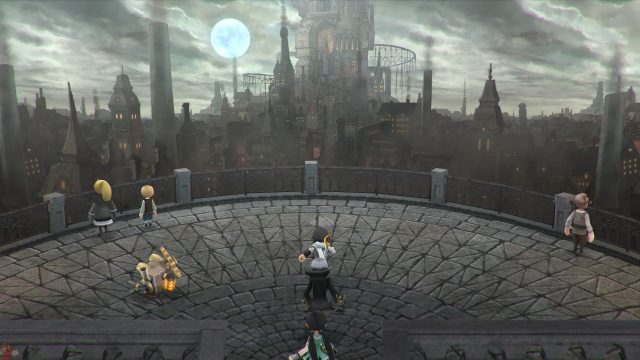 Go ahead. I dare you NOT to think of that one other game. You know which one…

Lots of other details figure into Lost Sphear‘s combat as well. Sublimation effects that occur randomly during battle add helpful benefits to equipped Spritnite, just as in the last game. Battlefield placement also plays a big role in combat. Each character has a unique field of effect for his or her main attack. Melee characters attack what’s right in front of them, while ranged characters can line up shots to hit multiple enemies in a row. When enemies are clustered together, it’s possible to make a single sword-swipe connect with multiple foes. Similarly, enemy attacks can connect with more than one ally if they are gathered close together or lined up in a straight row. Knowing the attack radius and effective range of enemy attacks is particularly helpful in boss battles, and it is sometimes possible to position party members outside the reach of a boss’s nastiest attacks. To accomplish this, players can actually move characters around the battlefield once their ATB gauge permits them to take an action in combat. Of course, enemy encounters on the field can sometimes be skirted altogether. It’s little tactical touches like this, along with its sheer variety, that keep combat enjoyable while maintaining the tension and challenge.

One of the most significant new additions to Lost Sphear is the ability — unlocked after a certain point in the story — for characters to don mechanized battle armor known as Vulcosuits. These allow access to specialized Vulcosuit actions along with strengthening offensive and defensive capabilities, both in and out of combat. Seeing a full party of four clad in armored plating face off against a particularly troublesome boss is enough to give any player a measure of hope against stacked odds. The drawback to this system is that the Vulcosuits only function as long as the party has Vulco Points, or VP, remaining in its shared pool. Every attack performed while wearing a Vulcosuit, including heals and buffs, drains VP, and items to replenish it mid-fight are very few and far between. The suits also don’t come with any physical weapon-based attacks, so utilizing them is always a calculated risk. Although the game offers three difficulty settings from the outset, Lost Sphear‘s boss battles offer a pretty high degree of challenge even when playing on Normal, especially when compared to the vanilla mobs that will be plowed through in the course of reaching a dungeon’s boss. Full party wipes; repeated runs to try out different tactics and party composition; or strategic retreats to reexamine the current equipment and Spritnite setup or undertake a spot of grinding are the norm rather than the exception with many of the game’s toughest opponents.

The combat system comes packed with so much variety that it manages to keep combat fresh during the game’s thirty-plus hour campaign, which is extended further with several optional late-game dungeons and bosses, and even some unlockable post-game content. Gathering rare memories to construct artifacts and restore lost areas is a fun and unique hook, moreso since each one built has a tangible effect on the game moving forward. From increased walking speed to improved critical hit rate, there are tons of ways to customize gameplay through artifacts, and gain a further edge in battle. 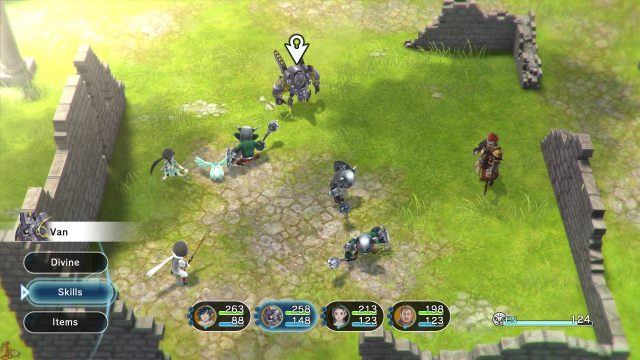 The new expanded color palette is a welcome addition.

Meanwhile, Lost Sphear‘s story also manages to ensnare the player’s interest. While not exactly groundbreaking, the narrative is generously proportioned. Something, whether big or small, is always happening. Fans of story-heavy RPGs will enjoy the frequent sections that are 100% focused on storytelling. With eight party members, all of whom have hidden depths to plumb during the course of the story, there’s lots to be discovered. This is where the heart of the game truly lies, and the story is richer for it. Though the critical path narrative eventually devolves into some tired moments of metaphorical logic, the interpersonal story between characters always remains on solid footing, with some not-so-veiled nods to a few well-known classic characters, and some genuinely surprising twists are in store.

Lost Sphear continues Tokyo RPG Factory’s tradition of developing visually arresting games. The game looks great, with beautifully animated character sprites and lush environments. In fact, the monochrome aesthetic of Setsuna is nowhere to be seen here, further proof that the studio took criticism to heart. There is a greater visual flair to some areas; an observation platform presenting a bleak and sobering view of a dingy metropolis stands in direct opposition to the crystal-clear reflective surface of one particular lake-themed area. However, not every vista is breathtaking; the game features its fair share of enemy reskins and cookie-cutter caves and mineshafts. The soundtrack, however, is a pleasant surprise from start to finish. The game’s musical score is easily on par with some of the best soundtracks out there, with memorable, beautiful themes that will make any avid RPGamer feel immediately at home. The piano-based music from the last game has been replaced with full instrumental pieces of every type, from rousing and heart-pounding to sweet and somber. Each character in the party also comes with Japanese voice acting, though it’s limited to combat shouts and yells, and can be completely turned off if the player so desires.

Backed up by modern technology, Lost Sphear offers a thoroughly engaging take on the classic RPG formula. The quality that Tokyo RPG Factory is capable of emerges through, and it’s refreshing to see the developer attending to previous criticisms and aiming to further satisfy players the second time around. The game’s overarching plot is a little derivative, the main conflict less impactful the more abstract the story gets, but it’s grounded by likeable characters with personality and a satisfying abundance of actual story-telling. Topped off by a beautiful presentation, in particular an amazing musical score, and a combat system that offers a lot of player choice, and it’s easy to become captivated by the charms of classic RPGs all over again.