The Gemcutters Have Their Work Cut Out for Them

Nippon Ichi’s Lapis x Labyrinth has some interesting elements, but on the whole doesn’t try to do that much. However, that’s not necessarily a bad thing all-in-all. The game’s relative straightforwardness is used well to create an entertaining, quick gameplay loop that is supported by its fun, colourful visual stylings.

There definitely isn’t much to the game’s narrative. Players control a group of adventurers who show up to a town located at the entrance to a labyrinth that supposedly houses the Golden Forest and its many riches. The town was set up to cater to the many budding adventurers seeking fortune, but with the supply of adventurers drying up, the town is on its last legs. The mayor hopes this new party can offer one last chance of salvation, as its success will lure more aspiring adventurers to the town and labyrinth. The setup is pretty much all there is to the story. After this, players venture through ten levels of dungeon, each with eight missions. There are some very brief scenes at the start and end of each level, but this just serves as some very brief flavour text.

Instead, Lapis x Labyrinth is all about its gameplay loop, as players take a party of four adventurers on brief sidescrolling excursions, each lasting no longer than fifteen to twenty minutes. There are eight classes to choose from with a limited number of colour options. Character levels are reset to one for every quest, so adding new adventurers to try out different classes is an easy proposition. Any permanent bonuses come from equipment and some party-wide and individual enhancements that are made available as the game progresses. Each quest indicates the general enemy levels, though it’s more an arbitrary indicator of progress, as the party’s level won’t get above the mid-to-late-teens and will have no difficulty defeating enemies that are supposedly two-hundred levels higher if decently equipped. 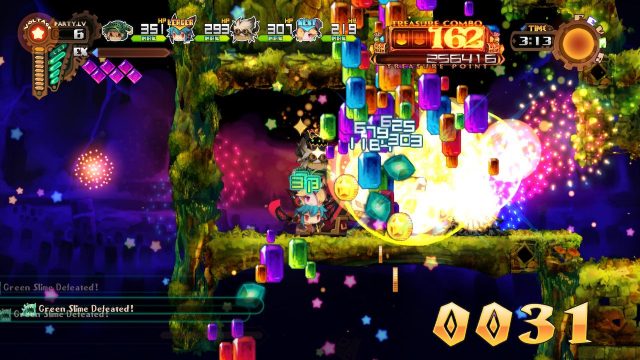 Lapis x Labyrinth is that rare game where not being able to see what’s happening is often an indicator of good things.

Quests are divided into between two to four floors of 2D sidescrolling and platforming action. Players are tasked with searching the floors to destroy the purple gems and fill up a bar in the bottom-right corner. Once this is done, it unlocks the portal to take them to the next floor. Each floor must be completed within five minutes, though players can still escape provided they don’t get hit by the spectre that appears when the clock hits zero. The final floor of each mission is a large fight against a boss and a load of minions, though it ends immediately once the labelled boss enemies are defeated. The speed in which these missions go by makes for a highly entertaining loop that is very easy to just pick up and enjoy; it breaks up the quick action nicely and there’s no getting bogged down in lengthy dungeons.

Combat makes use of the game’s unique dango system. Named after the Japanese sweets, the system sees the party displayed as four heads — and their accompanying storage treasure chest — on top of one body. Only one member is active at a time, taking the bottom head and body, and can be switched on the fly with a single button press. Heads can be knocked off, though players can get them back by going to their location provided that party member still has HP left. Players have a normal attack button as well as skill attack button, both with directional modifiers, and several jumps depending on how many heads are currently in the stack. There’s an appreciable difference in how classes feel and attack, but it doesn’t really affect how players need to approach battle; simply charging in is almost always the ideal plan. In addition to enemies, levels will also have some extra dangers, such as flaming floors or plants that spew poisonous gas if attacked.

On top of those basic attack options, players can get their inactive party members involved by throwing one of the heads for a special attack, after which they return to the stack. In addition, once a bar in the top-left is filled, players can throw all the heads at once for a massive all-in attack to devastate the vast majority of enemies on the screen. Furthermore, Fever Mode will regularly automatically activate, which makes the party invulnerable for a time and fills the screen with tons of gems as attacks connect. All of this leads to a rather chaotic battle system. However, any issue with being unable to see precisely what is happening is mitigated by a balance that is highly in the player’s favour. In fact, many of the boss encounters can be ended by a single all-in attack. Even though the challenge may be lacking, the feedback loop of jumping around and whacking enemies alongside all the bells and whistles that come with it is highly satisfying. 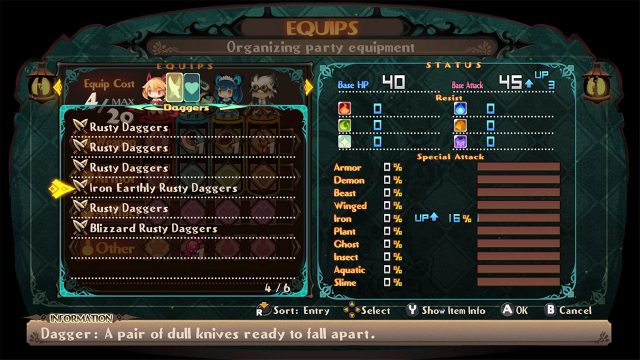 As is usual for a randomised loot-based game, most of these weapons serve as fodder for other things.

Lapis x Labyrinth presents players with lots of loot. Each piece of equipment comes with an equipment cost, plus potentially some additional randomly-generated passive effects. The party can only equip gear up to a certain total cost, which can be increased from the store that opens in the town, preventing players from simply trying to apply the best equipment all at once. The issue is that, like many loot-heavy games, a lot of what is attained will not be an upgrade to what the player currently has, and is simply relegated to fodder that needs to be cleared out every now and then. A blacksmith allows players to do some manipulation of the passive bonuses on equipment, but it never feels necessary to try and do so during the main game.

A lot of the enjoyment for Lapis x Labyrinth comes from how the polished visuals blend well with the fast-paced action. The colourful art style is pleasing to look at and the environments look great, even if some of the layouts are noticeably repeated. The rate at which gems and the like spurt out from enemies feels like a reward in itself. The visual experience helps distract from a lack of deeper elements to the game. Audio is less notable, but still does a good job complementing everything else with satisfying sound effects and suitably upbeat music. The track selection is fairly limited, but the rate at which Fever Mode and other things kick in means that it’s a mixture of tracks repeating.

Lapis x Labyrinth is for those looking for some straightforward enjoyment. The swift progression through levels and missions, combined with a highly appreciable visual style and polish provides plenty of satisfaction. It won’t do much for those looking for a strong challenge or deep gameplay, but it succeeds in what it sets out to do.