Your Eyes Are a Dead Giveaway

The Yakuza games are in the midst of an interesting state of transition. The series has never been more popular worldwide, but last year’s Yakuza 6 marked the end for series star Kazuma Kiryu. While Ryū ga Gotoku Studio works on shaping what a post-Kiryu Yakuza game looks like, it has filled the void with a new spinoff that, while being set in the familiar haunts of the fictional red-light district of Kamurocho, requires no previous knowledge of the series for new entrants. Judgment takes the well-honed brawler battle system the Yakuza games are known for and combines it with investigative adventure gameplay and a darker story. While the game’s story and characters prove to be just as compelling as its parent series’, the shaky marriage with the detective elements leaves the game short of perfection.

Judgment stars Takayuki Yagami, an ex-lawyer who’s now trying to eke out a living as a detective on the aforementioned seedy streets of Kamurocho. A mere three years ago, Yagami was a rising star amongst lawyers, having just managed to win an acquittal in a murder case — an extremely rare feat in Japan where 99% of trials end in conviction. Unfortunately, Yagami’s client turned around and brutally murdered the client’s own girlfriend. After setting a murderer free, Yagami became a pariah in the legal community and lost faith in his own judgment in people.

While Kamurocho isn’t among the safest of environs even in the best of times, a turf war has now erupted between the Tojo Clan and a new group of yakuza from the Kansai region, the Kyorei Clan. Adding to the danger is a serial killer known as the Mole who has been targeting Kyorei members in a series of savage murders. The tensions reach their peak when Kyohei Hamura, a captain in the Matsugane family of the Tojo Clan, is charged with the murders. After Yagami’s old law firm has been retained to represent Hamura, Yagami gets hired to prove his innocence. But after getting pulled back into the legal world, Yagami won’t quit until he discovers who the Mole really is and unravels the sordid machinations behind the whole affair. 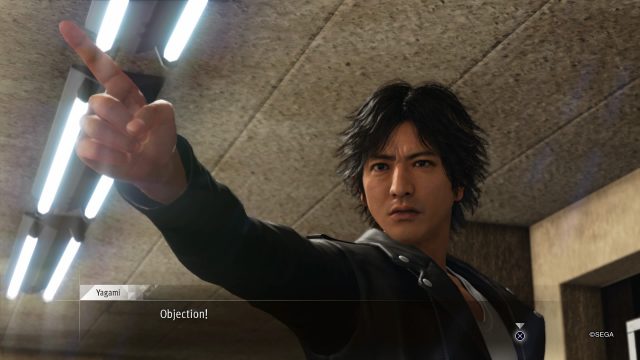 If you are making a game that involves the law, the main character MUST make this pose.

The Yakuza games have become known for their serious central stories and strong characters complimented by lighter side events, and Judgment continues this trend. The way that the narrative unfolds as Yagami gets to the heart of the murders is gripping. That’s not to say there aren’t some holes in the plot, but these can be forgiven when the overall experience is so much fun. Quality characters help smooth out the rough edges as well. Yagami is a likable character and following his arc of learning to forgive himself for what happened three years ago is the emotional core of the game. While the rest of the cast is also good, the other standout is Kaito — Yagami’s ex-yakuza best friend — who brings a sprinkling of the old Yakuza boldness and bravado in the best sort of way.

While the main story is darker and more serious than the parent series, silly side quests still abound in Kamurocho. Whether it’s beating an American who wants to become a ninja at darts, helping an idol chase down a “hat” that looks more like a toupe blown away by the wind, or catching a pervert preying on the young women of Kamurocho under the moniker Ass Catchem, there is still plenty of humor to keep players entertained. Most of the side quests are unlocked by making friends around the city, which usually involves visiting a place multiple times or perhaps purchasing items from a store. Each friend Yagami makes will unlock side stories and the more friends he has, the more detective cases will come through Yagami’s door. Also, Kamurocho is still there — though without the hostess clubs this time — to explore and waste time in, whether’s the player’s interests lie in SEGA arcades, casinos, or some new games like Kamurocho of the Dead — a hat tip to the Yakuza: Dead Souls spinoff — a VR board game, and even drone racing.

What really differentiates Judgment from its forebears are the detective portions of the game. While some these additions, such as chasing down suspects running through the busy city streets which triggers plenty of quick time events, have shown up before in Yakuza games, most of the detective action is all new. The instances where the player has to find a person based upon a description are fun and feel realistic, but there are occasions when the game will swap to the first-person view and force the player to find an important bit of evidence. These sections sometimes feel like the player is pixel-hunting in a 1990s LucasArts adventure game. There are also instances where Yagami has to get incriminating photos and tail people without being seen. The photography stakeouts are pretty fun — aided by some generous fail states — but the tailing sections are really inconsistent. 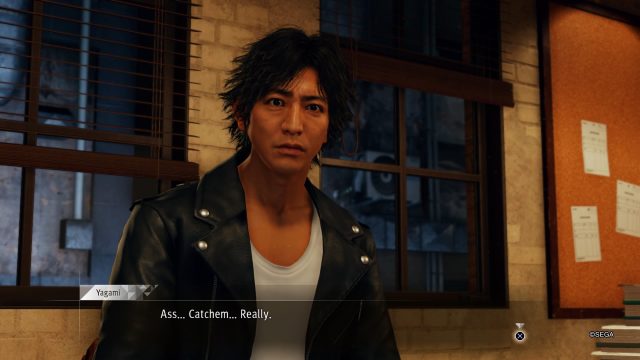 In the tailing missions, Yagami has to keep a person in sight without being seen as the subject will often turn around to make sure they aren’t being followed. During these missions, areas behind signs, cars, and other obvious hiding places will light up, allowing Yagami to dart into them with a button press, and become undetectable no matter the line of sight. Unfortunately, the open-world nature of the game works against this mechanic; some cars and signs that look like they should be available to hide behind aren’t and the player won’t know until it’s too late. The detective segments in Judgment are lacking a bit of polish and this, unfortunately, leads to some controller-chucking moments.

These detective portions can culminate in interrogation sections and, at one point, even a courtroom scene. While the investigations might seem reminiscent of Ace Attorney games, don’t be confused. This is a Yakuza game at heart and the detective elements are merely there to break up the gameplay. The interrogations boil down to confronting people with the correct piece of evidence or remembering and reciting key facts, but players only get a little extra experience for correct choices and no real penalty for mistakes.

While the new additions could have used a bit of extra care, one area that always shines in Yakuza games is the combat and Judgment delivers in this regard. The heart of the game is brawler combat where players string together light and heavy attacks into combos. The Heat meter of old has been exchanged for the EX gauge, but it works in the same way, building up via attacks or by using items to unleash powerful attacks. Judgment employs two different combat stances that Yagami can switch between: Crane and Tiger. When using the Crane stance, Yagami’s attacks aren’t quite as powerful, but he attacks quickly and uses wide sweeping kicks that are perfect for a crowd of thugs. The Tiger stance is more suited to one-on-one situations as the combos are centered around doing maximum damage to a single enemy. Yagami himself is quite fleet of foot and players can now run up walls to pull off huge kicks against the thugs and yakuza that will impede Yagami’s investigations. This results in the best brawler combat around. The battles are so fast, fluid, and entertaining that players will welcome each time a thug tries to corner Yagami in a back alley. 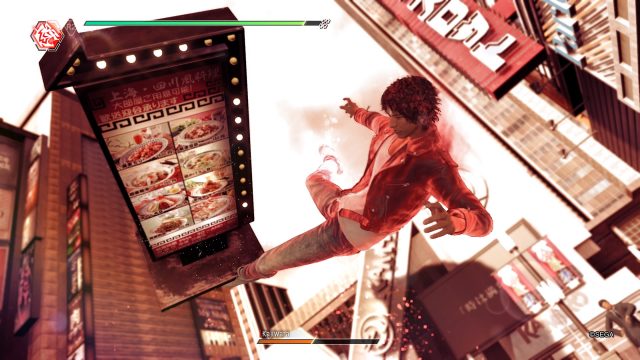 There are still plenty of items to assault people with.

Kamurocho still looks great, though it’s the only city players will be exploring this time. It all looks very similar to previous entries, though those paying close attention will note an improvement in the animations. The soundtrack, as might be expected of an open-world game, primarily kicks in during battles with energetic guitar riffs to complement pounding thugs into the pavement. However, it’s the sounds of this bustling red-light district that keep players company while exploring, and the sound effects are as key to setting the scene as the graphics themselves.

Judgment‘s localization is also deserving of particular note. Sega took the unusual step of having different scripts for the English voice acting in comparison to the English subtitles for the Japanese voice acting and the care that was taken really comes through. While the English cast is perfectly acceptable for those with an anathema to subtitles, the Japanese cast truly shines. Swapping between English and Japanese voices does require a trip back to the title screen, though players can pick back up right where they left off.

It’s time for the verdict on Judgment and I’m left feeling like a hung jury. The combat continues to improve — it’s incredibly fun taking down huge groups of yakuza — and the story and characters really shine. However, at times the rough edges on the detective elements remind the player that this is the first crack at this sort of gameplay. So it’s not a unanimous decision in Judgment‘s favor, but it is still a ton of fun and the inclusion of English voice acting and lack of an intimidating back cannon makes it a great place for newcomers to see what a Yakuza game is all about.