One Shot to the Body

Back in 2000, Front Mission 3 was the first in the series to be brought across the Pacific by Squaresoft. Today it is remembered fondly, although it also was rendered one of the unfortunate minority in the Front Mission series to officially see release outside Japan. This series offers a specific take on the idea of using giant robots for battle, one far more realistic than the Super Robot Taisen titles try to achieve. Front Mission 3 succeeds at being a strong tactical title that should be investigated by anyone who has bypassed it before, although certain elements could use a rethought approach if the Square Enix giant ever starts remaking this series.

Kazuki Takemura is a young wanzer pilot in Japan who gets mixed up in a conspiracy that affects the entire planet. A new weapon called MIDAS has been developed, something that seems to work like a radiation-less nuclear weapon that annihilates everything inside its sphere of effect. Such a weapon is naturally sought by numerous people with an eye toward world domination, and an initially-confused Kazuki soon enough makes it his mission to keep MIDAS out of the hands of whoever would use it for ill. This task takes him out of Japan and on a scenic tour of the western Pacific before a climactic encounter in Okinawa. Among the many undesirable persons who seek MIDAS, a group of genetically engineered hybrids from a laboratory proves the most persistent and dangerous.

In trying to tell a fairly realistic tale that possesses few outlandish touches, Front Mission 3 does a solid job from moment to moment. Certain items that are tossed out, such as a tunnel linking Taiwan to mainland China and Filipino space shuttles that open in the stratosphere, could have used more explanation. Kazuki is a hotheaded and impulsive protagonist, but usually the presence of more restrained personalities around him keeps this tendency from ruining all nuance. There are a few too many scenes in which characters are persuaded to alter deeply-held beliefs with a mere few sentences of text from one of the protagonists, but at least this keeps dialogue passages from dragging on too long. Individual moments are hard to accept, but the narrative as a whole holds interest until the conclusion.

Front Mission 3 also sports a unique feature of being able to access an internet-like network outside of battle, with the experience flavored in this universe by clearly showing that online access did not change much from its early days. Fascinating information about the game world and its denizens can be accessed through the internet, but doing so is done through the cumbersome means of navigating various online nodes in a manner akin to sifting through folders on a hard drive with only the ones mentioned in dialogue being accessible. The experience is interesting as a novelty, but going back to this cumbersome method of web navigation is a good reminder of why it changed, and the load times attendant upon each movement between nodes doesn’t help. Network navigation is never mandatory, which helps assuage potential frustration. 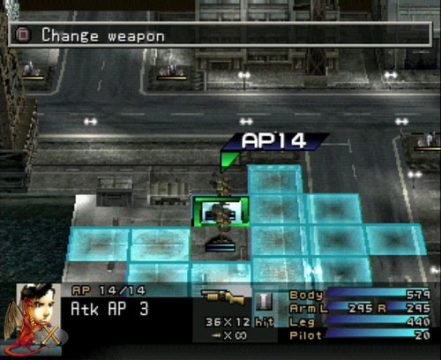 If that enemy isn’t a tempting target, try out some scenery instead.

Tactical titles tend to feature plenty of combat, and Front Mission 3 is no exception. Up to four of the player’s characters mount their wanzers to do battle with a variety of enemy units, ranging from tanks and helicopters to enemy wanzers holding a greatly varied amount of weapons and parts. Some enemies can only attack at melee range, others like to hold back and shoot missiles, while still others have access to numerous kinds of guns for firepower. The player also has access to a wide spectrum of weaponry with which to fight, and preparation before a battle is key to success during it. Organizing the right combination of parts for wanzers can be a time-consuming but worthwhile endeavor, especially since the machines have a weight limit beyond which they cannot go. Arriving upon a workable wanzer that sports the most possible options without being too heavy to move is quite enjoyable.

Battles in Front Mission 3 tend to have relatively few participants by the standard of other tactical games, to the point where the number of enemies almost never hits double digits. Each one can be a handful to deal with though, which makes the questionable AI behavior of foes more understandable. Combat would certainly be more difficult if some of the enemies didn’t stay inactive for several turns, but with only four characters at the player’s command, situations could spiral out of control if everyone attacked simultaneously.

As it is, luck already plays a significant role in battle. Wanzers come with four parts, and can continue functioning in a reduced capacity if the legs or either arm is destroyed. If a wanzer’s body is destroyed though, the whole thing is rendered hors de combat, and this can happen very early in a battle if the enemy gets lucky. The relative brevity of battles makes reloading to try again if things go wrong in the early turns an easy task, but frustration from a few lucky missile hits will still be present. Another random occurrence is having pilots ejected, which translates into missing a turn while the occupant moves one square and reoccupies the vehicle. While killing a pilot outside the vehicle is possible, somehow these gigantic wanzer weapons have terrible accuracy when deployed against fleshy humans, and even a massive shotgun blast fired from a robot’s fist may not eliminate people in one round. 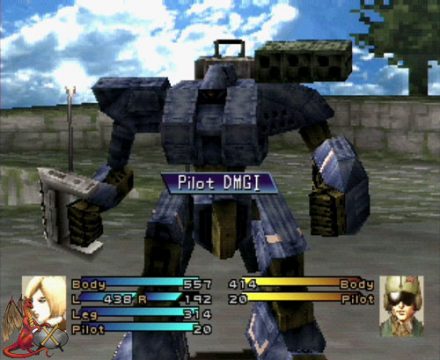 Yes, it IS possible to kill the pilot without bringing down the vehicle. Not easily though.

There are certain abilities pilots can learn to make the goings easier: skills such as increasing the rounds fired or forcing successful enemy attacks to do a set amount of damage. The game provides no help whatsoever in divining where these skills come from though, and at first they can seem to come out of the sky. FAQs help to unravel the mystery: each wanzer part can teach a different skill, though this is never mentioned within the game. Front Mission 3 is not the most challenging tactical game under the sun, and these skills are not mandatory for success, but such a fascinating aspect deserved considerably more attention, especially when several mandatory tutorial bits are presented in the early going.

At a distance, Front Mission 3 looks solid. There are a few too many moments when the camera gets close enough to objects in the foreground that players can count the polygons used for their construction, and any time a human model appears onscreen its indistinct facial features may bring back The Granstream Saga memories. Such issues were endemic on the PlayStation though, and this particular title manages to look pretty good for the time it was made. While it also has frequent load times, these manage to not be very long, which is more than some of its contemporaries can say.

A good variety of soundtrack compositions helps ensure that the player need not become overfamiliar with any of them. The quality varies somewhat, but most of the score is complementary to the action and entertaining to hear by itself. Over the forty hours or so necessary to complete one of the storylines, new tracks are deployed at a steady enough rate to keep the audio from getting tired.

Fifteen years ago I probably would have played Front Mission 3 twice to experience its second storyline, while also keeping a separate save file to sample the individual battles that can be changed by fulfilling certain objectives. Nowadays I’m not so eager to wade back into a sizable title right after its completion, but I had a rousing good time anyway. The lack of Front Mission titles that have crossed the Pacific is unfortunate, but this one is still worthy of enjoyment.