A Murder in the Village of the Dead? Tell Me This is a Joke…

Like any good mystery novel, Folklore keeps the player on the edge of their seat. The story of this action RPG follows the heroine, Ellen, as she ventures to a mysterious village following a letter she believes was sent by her mother. Upon her arrival to Doolin, the village of the dead, she witnesses the death of a middle-aged woman. This opens up many questions that she must answer — Who was the woman? Why did she call Ellen to Doolin? Why does the town look so eerily familiar?

In her quest to discover her past, she teams up with an eccentric journalist by the name of Keats. Keats is not a typical hero; he is very peculiar, mysterious and doesn’t do the right thing for its own sake. He is an opportunist and this mystery is a great chance for him to write a killer article for his occult magazine — nothing more.

Folklore‘s strongest point is its story and characters. Players will fall in love with the two heroes and will genuinely want to help Ellen figure out her past. Her past is doled out in small amounts, leading the player in circles until finally coming to a great conclusion that ties up all loose ends. The story flows through a chapter format and for the beginning chapters the player has to play through them as both Ellen and Keats separately, which leads to some repetition. This is the game’s sole problem area.

Both Ellen and Keats control exactly the same way and share most of the same dynamics. They can both absorb the souls of defeated enemies and utilize them in combat. The sbo The IDs, as the souls are called, can be equipped to any of the four face buttons on the controller. Each Folk, as the enemies are called, bestows upon the user a single ability, be it magical, offensive or defensive in nature. Learning what each Folk can do is necessary to being successful in this game.

Folks don’t automatically offer up their IDs on defeat — instead the player is forced to figure out how to bring them out of the bodies. This leads to a lot of strategy and quick-thinking, as there are often many enemies on the screen at once. When showing, IDs are absorbed using Sixaxis motions: waving it upwards, shaking it around, or rotating it quickly. Some Folks are incredibly hard to get to show their IDs — for these the player must often backtrack after acquiring more advanced Folks, or find the pages of lost picture books that lay hidden in each of the realms. The pages show the weak points of certain hard to absorb monsters, including the Folklores. Folks appear on screen when summoned and can be attacked by the enemies. When dealt enough damage, a summoned Folk can be killed, countering its attack and increasing the delay before it can be used again.

The Folklores are the bosses in the game. These Folk are, for the most part, extremely large and violent. They do not have many weaknesses, and often a chain of Folks must be used against them to knock them down. The picture books can help in this regard, but the player must still decipher them and hope that they have the correct Folks for the job. If not, improvisation is needed and the battle can get a lot more difficult. 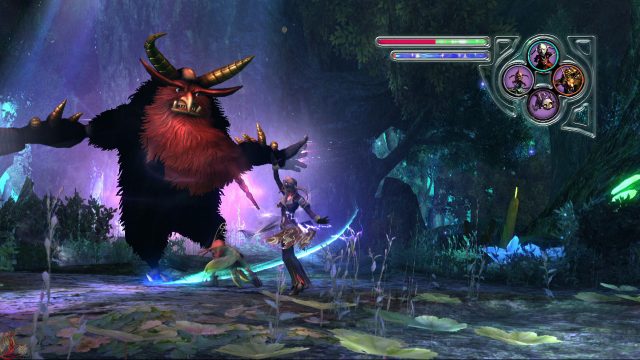 Not only do both Ellen and Keats level up as they absorb IDs, but each Folk can be leveled up as well. The cost to summon them, their attack power, or the rate at which they can be used can all be increased. This is done in several ways and the conditions can be checked at any time by looking at the in-game menu. Some Folks will level when more of their kind are absorbed, some will require that they destroy certain enemies by annihilating them instead of absorbing them, or by feeding them certain items. These items can be found in crystals on the maps, can be dropped by enemies and can be earned from quests. Players wishing to maximize their Folks will spend a great deal of time doing so.

Even though both Ellen and Keats share the ability to absorb IDs and explore the same areas, they don’t fight the same Folks. This helps alleviate some of the repetition, as each will get a different skill set and will need to learn how to take down different opponents. Ellen tends to absorb Folk that give finesse-based skills, whereas Keats accumulates pure offensive skills. Even though Keats is defensively weaker than Ellen, he is definitely not shy in battle.

The previous comment leads to a second difference between the characters — Ellen can find and equip various cloaks that enhance her defense to various attack types and Keats does not get any equipment of any kind. Instead he can “transcend” and go berserk. When berserk his abilities are all enhanced and deal major damage. This cannot be used at all times, but must be charged via damaging foes. A third difference lies in the way that each hero regains their mental energy. Keats’ energy heals to full every once in a while and Ellen’s heals at a constant rate. This leads to subtle differences between how often they can attack and defend, and when they should simply retreat.

Folklore is not a long game, nor a terribly difficult one. It clocks in at around 12-15 hours and at its most difficult spots will take no more than two or three tries to overcome an obstacle. To further alleviate the pains of defeat, death results in the player being returned to the last visited save point with all their progress intact.

Folklore‘s low playtime can be bolstered by leveling the Folks, by collecting Ellen’s cloaks, by finding rare Folks and completing quests. Quests can be used to easily gather large quantities of materials, as well as cloaks, picture book pages and rare Folks. Furthermore, there is a dungeon editor provided to the player. With it, they can produce and populate their own dungeons that can be shared with other players by uploading them to a central server. This means that they can also download the content made by others. By playing through this content, the player may be able to accumulate some rare items much quicker than they could in just the main game. This adds a certain amount of replayability, as friends can challenge each other with bigger and more loaded dungeons. 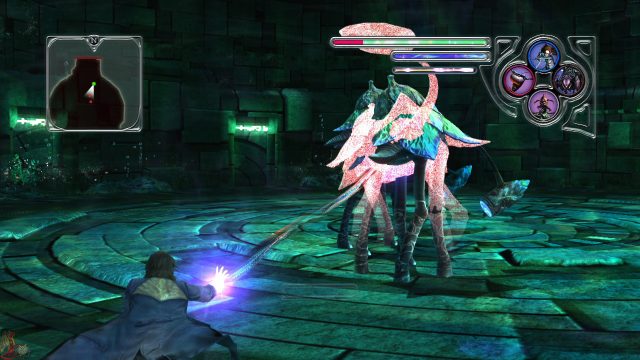 Your soul is MINE!

Folklore boasts some amazing visuals. The graphics are crisp, the animations are flawless and the backgrounds are incredible to look at. The heroes are extremely well designed with Keats being a real work of art. Even the monsters are detailed and can easily be differentiated even from afar. Except for a few cases, monsters are not simple palette swaps of previous ones. The cut scenes are split between amazing video sequences and semi-still comic book panel sequences. In the latter, the scene switches through panels with the characters speaking, as if the player is reading through the pages of a comic. The characters do move in the panels, but the movement is mostly limited to blinking and breathing motions. These are a little hard to get used to, but provide the game with a lot of charm.

The voice work, when its there, is really well done. The actors are well chosen for their roles. The music fits the different areas very well, and the sound effects fit the attacks. All in all, the audio work is well done and the game is best played with the volume turned up. The only misgiving is that the comic book scenes are not all voiced. With the capacity of a Blu-ray disc, it is hard to believe that the game isn’t fully voiced.

In the end, Folklore is a true masterpiece. From its graphics and sound, to its masterfully told story, and finally to its addictive combat that is both strategic and hectic, the game is close to flawless. The repetition found in the earlier chapters and the lack of voice work in some key scenes bring it down somewhat, but it is still highly enjoyable. As a final thought, Folklore could be considered a PS3-seller for those in the market for a gamer with a solid storyline with the gameplay to back it up.