The Path to Victory is Paved with Wise Decisions

Nintendo finally brings the venerable Fire Emblem series to the GameCube in a wonderful outing. This ninth entry in the Fire Emblem series follows the tale of Ike as he literally grows up into his new role as leader of a mercenary company. Fire Emblem has always been a solid Tactical RPG series, and Fire Emblem: Path of Radiance doesn’t disappoint.

The crux of Fire Emblem has always been its battle system. Path of Radiance is divided up into chapters, and each chapter is essentially just a few cutscenes and a large battle. Turns usually consist of moving units to set up a defensive front, attack enemy units within range, or a mixture of the two. But units can also choose to use items to heal or boost stats. They can even change their weapon in order to facilitate a more effective counterattack.

When selecting a unit to fight, a display will appear showing the expected damage the units will take as well as the number of attacks that each unit will perform. This allows the player to quickly assess the potential outcomes without bogging the game down in math and complicated formulas. However, a more detailed display is selectable for the player who doesn’t want all the work done for them. This window only shows the two units’ stats and leaves it to the player to know whether those stats translate into an easy victory or a thorough routing. This type of customization of the game’s interface is really nice and lets the player decide how “hard core” the experience should be.

After all of this is done for every unit on the player’s side, enemy units then get the chance to do the same. The actual fights take place by default in a close up of the two units, complete with animations. This too can be changed so that battles take place on the main map of the level, albeit with less detailed animations. This option speeds things up considerably, and on the fourth playthrough of a map, can be much appreciated. 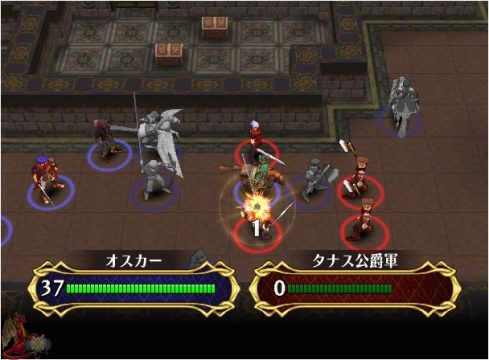 A solid defensive front will keep units from being surrounded like this.

Fire Emblem: Path of Radiance provides many features like weapon hierarchies, long range magic attacks to avoid, recruitable enemies, limited use weapons, and customizable weapons. All of these work to keep the battles from being simple stat comparisons. On a side note, coming up with clever names for customizable weapons is quite fulfilling. Of course, strategizing is the name of the game. There’s no describing how much fun it is to setup a defensive line so that a low level caster can walk up behind it and get the last hit in a fight. The weakling nets a large amount of experience, all with no personal danger.

All these strategy elements are important because the game is hard — assuming that no one cares about their team. One of the staples of Fire Emblem is that characters that die in a battle stay dead. No revival items of any kind are present. This presents the RPGeneral with a crucial decision — to either sacrifice a soldier in order to complete a level or to start the level completely over. Because of this, some battles can take five hours due to replays to get through without casualties.

This really is the only possible down point of Fire Emblem: Path of Radiance. The tenth replay of a level could be very frustrating, especially if someone is dying only near the end of the level. However, this does make victories feel that much more important. Strategy, patience, and careful thought pay off with a joyously empty casualty report. All told, the game is worth the frustration, as the battles would really be too easy if this aspect was missing. Just expect the game to take 50 hours or more to complete, even if the game clock only says around 30 hours when the final credits roll. 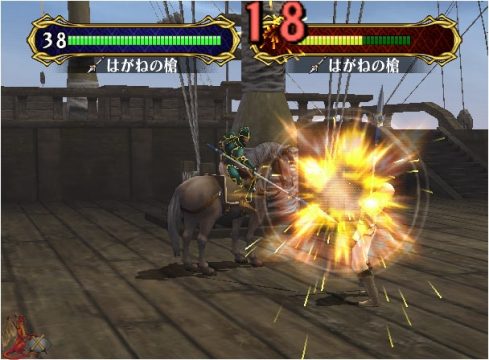 The animations are flashy and fun.

Loneliness won’t be a factor for Ike on his quest. With 46 potentially playable characters, would-be generals get to look forward to recruiting new characters on almost every map. The characters even interact with each other in optional support conversations that boost their stats. This leads to a pretty customizable roster, even allowing for replays of the game to use entirely different teams. Also, Fire Emblem: Path of Radiance even deals wonderfully with the problem of ending up with underused and thus underleveled characters. Depending on several factors, the player receives an amount of bonus experience that can be assigned between battles. It then becomes a strategic choice to either boost up the strongest characters or level up the weaklings who couldn’t get a kill if their life depended on it.

All of this fun is wrapped up in a pretty nice package. Battle animations are realistic. Critical hits and special moves inspire cries of delight and triumph from the player and any friends nearby. The maps aren’t exactly jaw dropping, but have lots of color and weather effects when they’re needed. Also, the game supports progressive scan, which is a nice bonus for those with the requisite hardware.

A variety of tunes will mark the adventure. The music themes change a few times during the game so getting bored with the battle theme shouldn’t be a problem. The tunes are catchy and hummable, as is needed for a tactical RPG, but won’t be memorable beyond the next RPG or two.

The story is surprisingly complex. Ike is the son of the commander of a mercenary company which is hired by the princess of Crimea to protect her during a war with the neighboring country of Daein. Soldiers, paladins, thieves, wyvern riders, swordmasters and more will join Ike’s company on this journey. Ike’s dealings will soon lead him to the laguz, a race of shapeshifting beastmen who have a long history of oppression and strife with humans. These laguz will also lend their powerful beast forms to the cause. Themes are pretty mature with the exploration of topics like racism and slavery, resulting in an unexpectedly touching story that is well worth seeing through to the end. It’s always appreciated when a game goes deeper than just wanting the player to defeat an evil villain.

The fun doesn’t stop with the credits, either. After the main story, two challenge maps open up for RPGamers to try their luck on. Also, a sound player and a bevy of artwork become accessible. In addition, players can hook up a Game Boy Advance with either Fire Emblem or Fire Emblem: The Sacred Stones to view artwork from those two games as well. Path of Radiance boasts three difficulty modes, thus giving a reason to work through the game again. Sadly, however, the maniac mode in the Japanese version is missing. This mode offered odds that were extraordinarily stacked against the player, so it is sad to see such a promising challenge missing.