Final Fantasy Crystal Chronicles: Ring of Fates for the Nintendo DS is the second entry in the Final Fantasy Crystal Chronicles series. Much like its GameCube predecessor, Ring of Fates has strong multiplayer features, but attempts to improve in terms of its single-player functionality. This time around, there are two completely different modes: story and multiplay. Story mode is for a single player while multiplay is a local-only feature for up to four players that takes them into the Ring of Fates world to explore and complete quests. Both modes have issues that keep the game from being as good of an experience as it could have been, but both still remain enjoyable.

The story mode of Ring of Fates starts off as a cute, sugary-sweet adventure before taking a path into a much darker, if still a bit shallow, one. The main character, Yuri, and his sister Chelinka begin the game as your typical, fun-loving children in search of adventure, but their world is soon rocked by tragedy, forcing them to grow up quickly. In their adventures, Yuri and Chelinka team up with a handful of other unique characters to battle against the wicked Lunites, a group of people desiring to bring the moon’s evil influence to the world. The overall story is by no means epic, but is surprisingly deeper than the cutesy, childish characters portray it to be at the start. 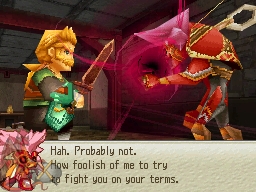 Battle in the Little House on the Prairie

Ring of Fates is an action RPG featuring a party of unique characters, each with their own contribution to the team. All of the races from the original Crystal Chronicles return with each having a playable character in story mode. Yuri is a Clavat who is a well-balanced melee fighter. The other playable characters consist of a Lility, Selkie, and a Yuke. The Lility is a powerful, but slow attacker who can summon a Lility Pot for many different uses: alchemy, rolling attacks, and platforms creation. The Selkie is an archer with the ability to perform a double jump and attack from a distance. Even though all characters have access to magic, the Yuke is a specialist in casting spells. Any of the game’s four playable characters can be swapped to mid-battle, allowing for each player to battle as they desire. Though the game does not have specific job classes, equipment can be purchased or crafted to grant a character the look and abilities of a classic Final Fantasy job. A character dressed in a White Mage outfit will be more useful as a healer where a character dressed as a Knight will be more physically strong. This armor is interchangeable and will show up on the character during combat making them look like their chosen job.

Physical combat is rather solid, offering normal attacks, special attacks that vary by race, and tribal abilities. Each race gains their own special attacks that range from a charged attack for Clavats to a triple arrow shot for Selkies. They give each character their own unique style of gameplay. Only the Clavat and Selkies have tribal abilities that are offensive, as the Yuke and Lility abilities are functional abilities that assist gameplay. The magic system is fairly diverse, though difficult to manage. Characters share an inventory of magicite such as Fire, Blizzard, Raise, and Cure. These spells have to be aimed manually and that can pose a problem with the fast paced combat of Ring of Fates. A nice addition to the basic casting system is stacking of magic spells to create more potent magic. Players can aim a spell and then lock it in place. Once the first spell is locked in place, another spell can be cast in that same location to make a new spell. Stacking two Cure spells, that would normally restore around 200 HP, would blend to create Cura which would restore 400 HP. Even greater magic can be created with mixing of lots of different spells, so there are many more combinations than the initial six base spells. These are likely easier to perform in multiplay mode, as the AI in single player is not smart enough to assist in casting these higher magic spells.

Though the combat system in Ring of Fates is fairly diverse and enjoyable, frustration hits when controlling characters. Moving characters around the world is done via the directional pad, not taking advantage of the stylus. Though the touch screen is required for changing between characters, selecting spells, and sometimes for item management. Having to swap between the touch screen and thumb controls is awkward and will often have players taking their eyes off of combat to touch the correct area of the lower screen. Free-range movement is also frustrating, as characters are expected to move in a diagonal direction, yet the directional pad is not always as responsive as needs to be to accomplish this. The last and most painful area of annoyance is the horrible AI of the other party characters. When the player is not in direct control of a character, they will either follow the main playable character or they will get stuck behind a wall or on a ledge below. Oftentimes, characters will fall, jump, or walk off the edge of a cliff causing them to take damage or have to be resummoned back to the active character. Players will spend a good amount of time pressing the left trigger to resummon the rest of the party to their location. 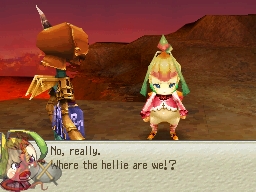 The issues with the AI are only a problem in the story mode, since it only allows for a single player. Multiplayer mode is a storyless, quest-based way for players to gather in a room with friends to go on an adventure as a team. This mode is quite enjoyable, as players have more assistance than when playing solo. Multiplayer quests can be played solo to build up a character or with up to three other players. Parties can be formed at the start of play, as players are given the option of creating a character, either male or female, from any of the four races. Through multiplay, players can plow through the game to continually build up their created character. Even though there is interaction with the game’s story characters, the lack of a plot causes this mode to feel hollow. If players don’t mind gathering together with a group of friends to level up characters for no other purpose than improving their character, then this can be a lot of fun. The lack of online play, however, is a true shame. Multiplayer mode would have been a wonderful feature if players all across the nation could battle together.

Crystal Chronicles is a visually impressive DS title. Cinematic scenes are few and far between, but the few that Ring of Fates features are well detailed. The game’s normal scenes look decent, but are nothing too outstanding. The most enjoyable aspect of the visuals is seeing the change of armor on characters, as even though they are small, characters still are well-detailed. The game’s soundtrack is good, but not very memorable. Voice acting is featured throughout the game during certain scenes and is fairly solid. Since the main characters are young children, the childish voices fit well, even if they might be occasionally grating. All of the other characters that are voiced have good quality voice acting behind them, though the bland dialogue does not really give the actors much to work with.

The story mode of Ring of Fates is rather short, lasting around ten hours. Throughout those ten hours, players can expect some simple puzzles, moderately challenging bosses, and a good bit of story. Overall, the experience is fun, save for a few problems. If those few issues had been improved, it could have made this game much more entertaining. The major problems with Final Fantasy Crystal Chronicles: Ring of Fates are the lack of multiplayer functionality in the story mode, the lack of plot in multiplayer, and not featuring online play for either mode. However difficult it might have been to create solid functionality for online play, at least in multiplayer mode, it would have helped this game tremendously. Ring of Fates is full of potential, but the aforementioned problems, the awkward interface, and horrid AI hinder the game from truly succeeding.