Remember Final Fantasy Tactics? 6 Eyes Studio certainly does, and it’s hard to argue for a better game to use as a launching point when developing your own modern take on classic tactical RPG combat. Fell Seal: Arbiter’s Mark is just that: an isometric tactical game with immediate pick-up-and-play familiarity for anyone that’s not a complete newcomer to the genre, bolstered by a few twists of its own to the formula, couched in a well-told, lengthy story with a slick presentation. In short, the game stands as a success for its first-time developer.

Centuries ago, the land of Teora faced destruction in the form of a powerful beast known as The Maw. Seven great heroes arose to slay the threat, and, with the power gained by defeating it, formed the Council of the Immortals, a group whose sole purpose it is to govern the land with the wisdom of the ageless. To enforce their laws, the Council created the order of the Arbiters to carry out its will and preserve the peace. As time passed by, however, lawlessness returned, and the order of Arbiters grew weaker and corrupt. As Fell Seal opens, players take up the mantle of Kyrie, a captain of the Arbiters, and her squad as they police the dark alleys and country roads of Teora to maintain its peace.

Things don’t take long for the narrative to head towards intriguing territory. In the game’s tutorial combat mission, Kyrie’s squad comes across a fresh murder scene while patrolling the city’s cobblestone streets one silent night. Apprehending the suspected killer after dispatching his helpers, it falls on their shoulders to deliver him to a nearby Arbiter command post, where he will face swift justice. No sooner is this task completed, however, than events take several unexpected turns. What follows is a long narrative — over forty hours’ worth — of interesting developments, well-written characters, and sharply-honed dialog.

Generally, tactical RPGs live and die by virtue of their combat systems, but it is a credit to Fell Seal that the story is strong enough to give players plenty of reason to stay within its world. Kyrie, her captains Reiner and Anadine, and other important story arc characters feel extremely natural. While never under so much focus that they detract from the main plot, many ancillary characters have their own backstories, which are explored as a natural side effect over the course of the main story. Characters switch allegiances, villains reveal unsuspected depth, and relationships form as a natural course of action. There are moments of sincere emotion and organic humor. Meanwhile, all characters’ dialog is razor-sharp, inflected by their individual personalities, and fits well within the game’s unique fantasy world. 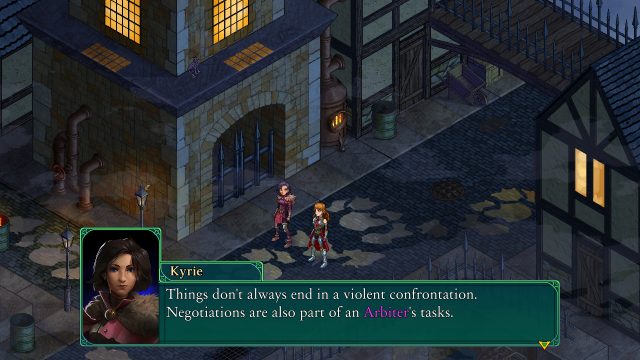 A routine nighttime patrol kicks off the game’s chain of events.

That isn’t to say the tactical side of the game can’t hold its own. Like its inspiration, combat takes place on isometric maps and is turn-based, with the unit-based turn order plainly visible by an action bar at the top of the screen. Each unit is able to move and perform an action on their turn, in either order. While exploring the land of Teora, players will do battle on a variety of maps, ranging from holy temples and dank caves to sun-drenched bazaars and cliffside waterfalls. Some maps include environmental features and hazards, like doors or pathways that link different tiles of the map to each other, and being pushed onto a water-filled space, without the proper gear to survive the plunge, sends the unlucky character to a watery grave. However, battles could have benefitted from more varied setups and victory conditions, as almost every map lets the player assemble a group of six to seven combatants and simply tasks them with completely wiping out the opposition.

If there’s one thing the game delivers in spades, it’s customization, from a myriad different ways the difficulty can be tweaked to the cosmetic and combat readiness options for characters. Similar to other titans of the tactical RPG genre, each allied combatant can equip a primary class, as well as a secondary job, choosing from such favorites as Mender, Ranger, Knight, and Wizard, but also including more unique classes such as the status-effect-inducing Fellblade, as well as Plague Doctors who put their knowledge of the medicinal arts to more nefarious use. There are even unique classes attainable by single individuals, such as Werewolf, Vampire, Princess, and Demon Knight. In addition to reaping the learned benefits from two separate classes, additional skill slots can be filled with passive and counter abilities learned from other classes, making for a rather large degree of customization for each and every character on the team. Since all characters, even benched units, gain ability points after each battle, this system is also a beast to keep up with. Between story characters and additional combat units hired on from guild halls in cities, there is no limit to how many combatants can make up the team roster, and the game’s balance requires that players constantly keep up with equipment upgrades and skill and class refinements for everyone to stay competitive in the game’s battle scenarios. 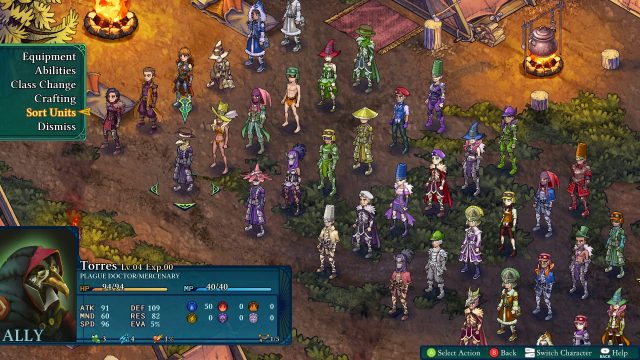 Options for party construction are comprehensive, to say the least.

Players who enjoy tinkering with the many different possible character builds will arguably get the most out of Fell Seal‘s option-laden systems, whereas others will struggle being prepared for the game’s rather sharp difficulty curve. Enemy units continuously take advantage of new and brutal class combinations. Each combat encounter, no matter how simple it initially appears, has several carefully-considered, challenging wrinkles baked right into its enemy placement and design, and later bouts may very well require several restarts with different teams of fighters to best. Units that do fall in battle receive stat-impairing wounds that stack and carry over to the next battle, unless the unit is rested for one or more battles beforehand. This does mean that late-game challenges, which will likely require a team of the best, most-proven veteran units, may be interspersed with lots of mandatory low-level grinding, both for the extra experience it offers as well as the need to have wounded units recover so they can be present for the tough stuff. The pacing of Fell Seal‘s campaign suffers towards the end because of these mandatory breaks in the action.

As the story nears its inevitable conclusion, there is quite a bit of additional content available to stretch the experience out a bit. Taking advantage of grinding on previously cleared maps can level fighters well beyond what is required to complete the campaign. Hidden treasure chests strewn throughout the levels contain unique items that unlock even further optional content, side quests and optional battles can be accessed, new characters and classes can be discovered to take along into the main narrative, and a combat arena awaits a new champion. There is even a not-so-subtly-hinted-at second ending that can be worked towards. Once again, it’s those players who enjoy tinkering with gear, classes, and stats that will get the most out of this additional content.

Graphically, Fell Seal is no slouch, either. The game’s environments eschew the pure 3D aesthetic for a more stylized, hand-painted look; maps are set in place, and designed to be fully visible without the option to rotate them like in some other games. Environments are vibrant, colorful, and full of personality, making sure that the journey through Teora remains memorable at every turn. Characters are brought to life through some very nice character sprites, with fully customizable portraits and sprites for player-created units. Animations are also good, though many combat animations are pretty similar, and only some lesser-seen spells and abilities stand out as special. 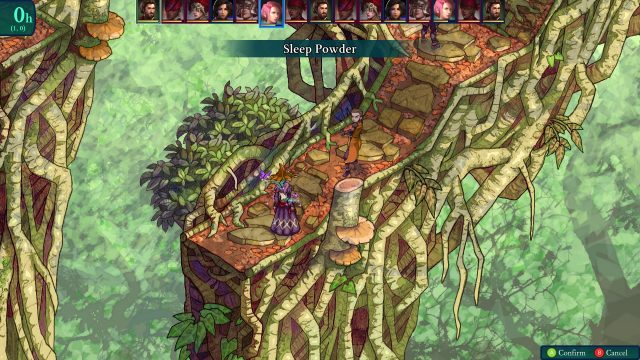 The land of Teora hides some incredible sights to behold on your journey.

Fell Seal features no character voice work, but it does include a nicely composed, fitting soundtrack of medieval-inspired melodies that sound authentic and written for the actual instruments one might imagine could be found in a place like Teora. With such a long game, however, some of the main combat and overworld themes do slightly overstay their welcome by the end. Combat itself is filled with the satisfying crunches of maces smashing into bones and the cacophonous discharge of pistols firing shots at unsuspecting targets.

Fell Seal is a game that is easy to recommend simply because it does everything well. It borrows heavily from previous titans in the genre for its strategic gameplay, but it does so while maintaining a highly polished, solid experience that help it to stand on its own merits rather than just a carbon copy of things we’ve seen before. Its high level of character customization and intriguing story help balance out its grindy latter half for players inclined to tinker with character builds; others have the option of adjusting difficulty in their favor to help push through to the end a bit quicker. Ultimately, anybody with even a passing interest in the genre will feel welcome and right at home here.