A Faster and Improved Sequel

Players take on the role of the Master, defaultly named Hakuno Kishinami. The game sees players collecting a force of Servants, powerful champions who do the actual fighting for their Masters. EXTELLA LINK focuses largely on the new Servant, Charlemagne, or ‘Charles’ as he prefers. He is quite the upbeat and optimistic hero, who finds a way to praise even the most abrasive of personalities. Together, Charles and the player must stop Rex Magnus Karl from ‘oraclizing’ other Servants and taking over the world of SE.RA.PH., a virtual world created from a supercomputer within Earth’s moon. Along the way, they encounter other Servants from the previous entries of the series, who can join the roster of playable characters. 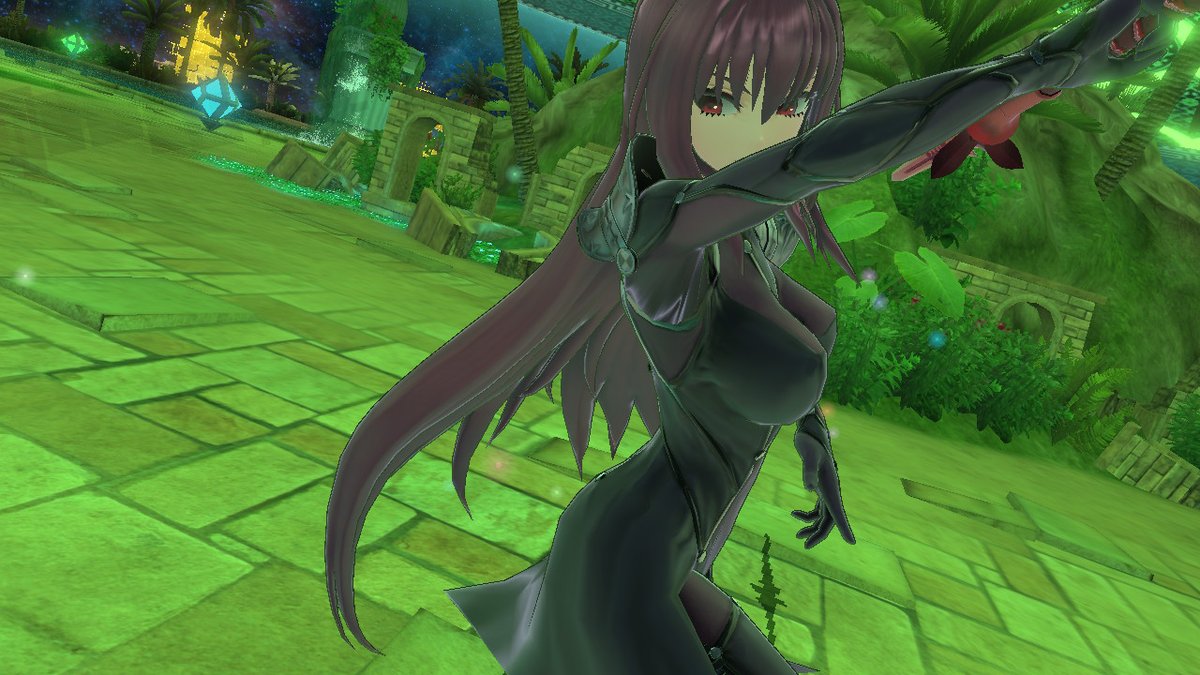 Scathach, one of the many Servants who can join.

The story itself is very convoluted. The dialogue scenes between battles often introduce new characters in an abrupt, contrived way. For instance, Lancelot, Robin, and Medusa just randomly pop up in the story out of thin air to either hinder or help the Master while providing little to no valid reason or motive. While this isn’t necessarily a dealbreaker, newcomers to the series will often scratch their heads at what is going on, or which character is who. At least the story centres around Charlemagne and his quest to stop Rex Magnus Karl, and these two characters develop throughout the progression of the game. Yet, compared to the game’s predecessor, the whole plot seems more like a side story this time around. Fortunately, following and understanding the story aren’t essential to enjoying the game.

Combat provides the bulk of the game’s strengths. Players will zip across the map at soaring speeds, completing objectives and cutting through swaths of the enemy horde as if they were made of paper. Battles resemble typical Musou-style games, with the player choosing a Servant to control to rack up combos and build up the Moon Drive gauge. Activating this gauge boosts attack and defence, and unleashes a special attack. Enemies killed in this state will boost another gauge to activate the ultimate, devastating attack: the Noble Fantasm. Each Servant has his or her own specific Moon Drive attack and Noble Fantasm, which opens up a nice and sometimes lengthy cutscene that, fortunately, is entirely skippable, as these attacks will occur often enough during each battle.

The pacing of the action never slows down, and the combat feels like it’s on fast forward the entire time. There’s a dash button that propels the Servants towards their next objective. If that happens to be across the map, then no problem. The map is divided into sectors, which the player can warp across to quickly reach the opposite side. There is no such thing as endless running through an empty field, or a lengthy lull in combat. Furthermore, each Servant can equip up to four unique special abilities called Active Skills to mow down enemies. These Active Skills have a recharge timer that refreshes quickly, allowing the player to unleash a constant barrage of flashy and powerful attacks. Utilising these skills alongside Moon Drive and Noble Fantasm attacks will end many battles, including boss fights, very quickly and easily. 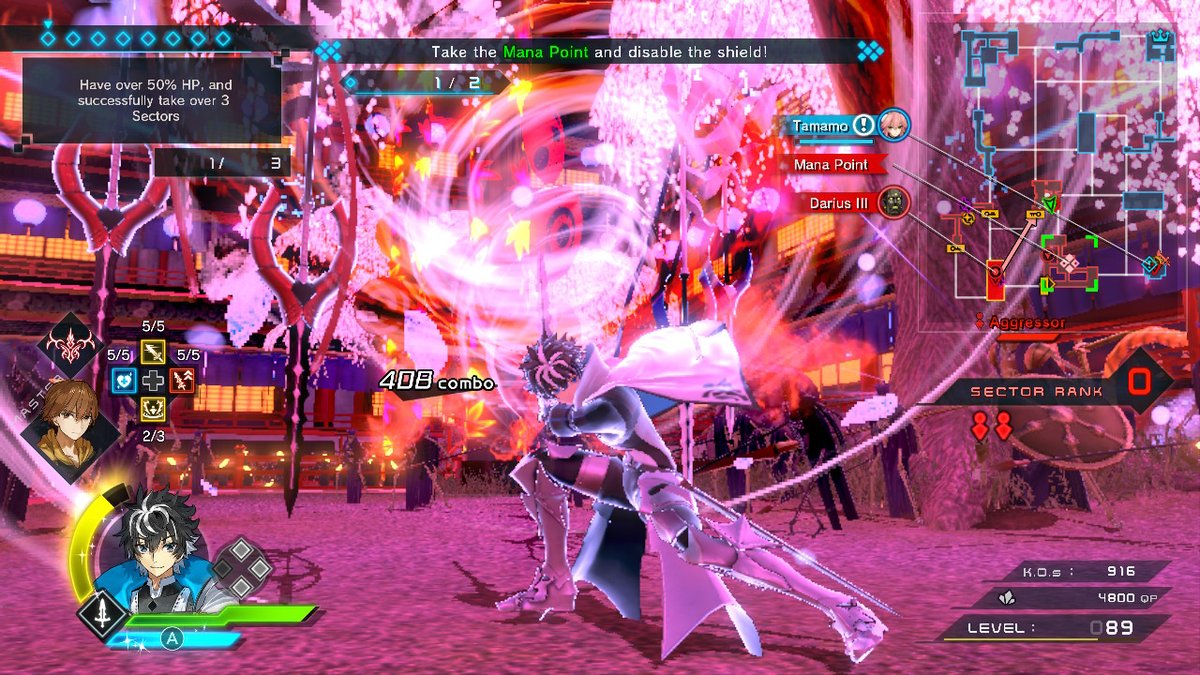 Spamming an active skill to clear the battlefield.

The pacing of the game combined with the variety of special attacks makes the action a breeze, but too much in a sense. Even on the higher difficulty levels, the game is rather easy and lacking in any notable challenge. All one has to do is spam Moon Drive and Noble Fantasm attacks to win, though as the effect of each Servant’s special attacks varies, some Servants are quite obviously better than others.

Multiplayer allows up to eight players to fight in a four-on-four King of the Hill melee via local or online connection. However, a two-player cooperative story mode, either split-screen or via local connection, similar to what was found in other Musou games, is absent here. Players who enjoy playing couch co-op with their friends will find this disappointing, though such a mode would make an already easy game even easier.

Local connection requires everyone to have a Switch along with a copy of the game. The chances of having eight players with eight games and consoles coming together in one room for this would be rare outside of a tournament setting. That leaves the online mode, which is also flawed, requiring a lot of waiting for other players to join in such a sparsely populated online community. If one does manage to find an online match, the four-on-four battle itself is nothing but chaotic, blurring madness. It is impossible to keep track of eight players dashing around each other, blasting their special attacks in a flashy cacophony of destruction. While this mode offers its own dose of entertaining mayhem in an explosive sort of way, the wait for other players often results in frustration and disappointment.

Despite these issues, Fate/EXTELLA LINK provides a good degree of replayability thanks to the fun gameplay and controls. The mission objectives have enough sense of urgency to keep players on their toes throughout the stages, and the item looting and boss fights in between prevent the game from sailing into the doldrums of mindless, repetitive slaughter. The controls are quick, responsive, and allow players to execute the desired skills and special attacks with ease.

The character customisation adds even more flavour to the game. There are many options in the base camp, which acts as the hub where players can sink time into fine-tuning their favourite Servants. There is the option of using money to bring characters’ levels up to match the highest-level character in the roster, thus allowing new Servants to catch up to the most powerful ones. The Item Atelier can create equipment and items to further strengthen the Servants by giving stat bonuses, elemental-based attack and defence boosts, and the ability to use buffs and heals in battle. Another interesting addition is the ability to unlock and change costumes, which also changes the character display art during dialogue scenes. These costume changes, often limited to only two or three per character, have a significant level of detail that extend far beyond a mere palette swap. 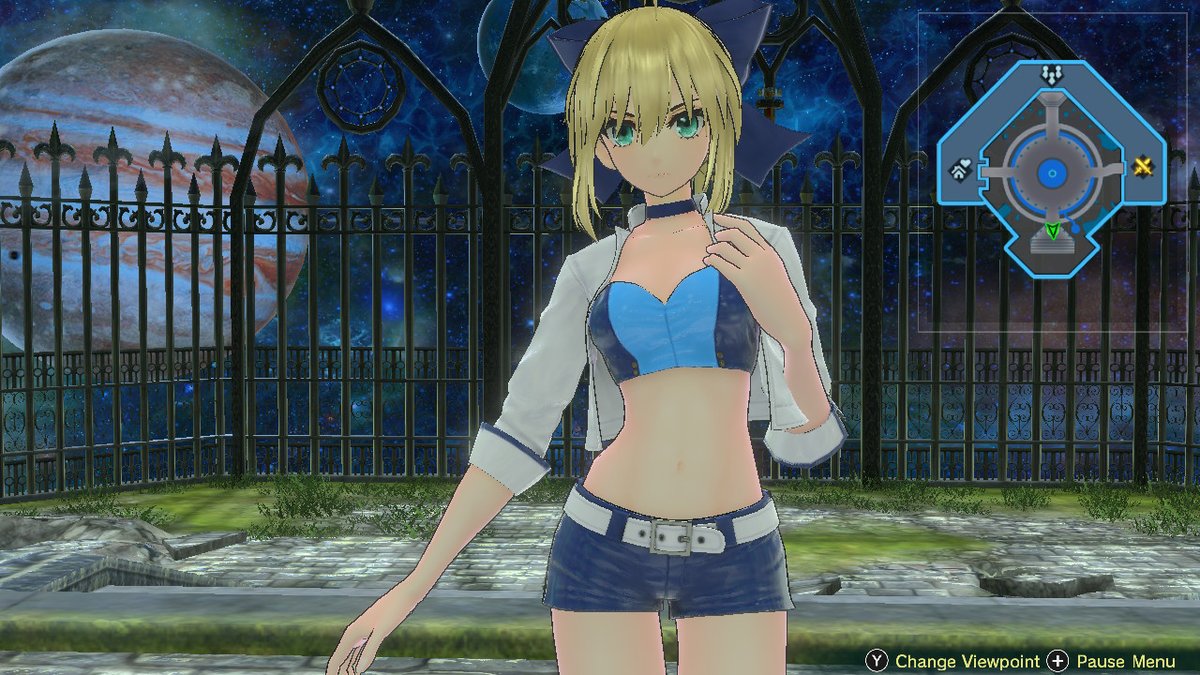 One of Artoria Pendragon’s unlockable costumes.

The visuals and sounds are solid enough, but not groundbreaking. The character portraits carry the high-quality art of the Fate series, and their 3D counterparts are well-rendered. The Nintendo Switch handles the game rather well, docked and undocked, and clipping and framerate issues seldom came to light. The soundtrack fits the scenes very well, and there were a few memorable tracks. The voice acting, although in Japanese, is also well done.

Considering the multitude of Dynasty Warriors-type games out there, Fate/EXTELLA LINK manages to stand out from the crowd with its refined and addicting gameplay and combat. Fan of Musou titles or the Fate series should find plenty of satisfaction with this. Completing every stage of the game’s main story takes about fifteen hours, yet players can spend much more time completing the side missions, unlocking the costumes, and increasing their bond levels with Servants. The game does get repetitive fast, but the fast-paced action and short missions are enough to keep players thoroughly entertained, especially in short bursts.