When asked to review Compile Heart’s Fairy Fencer F: Advent Dark Force, an update to its PlayStation 3 RPG, I had very few expectations. The game’s anime aesthetic, plainly apparent after simply browsing a few screenshots, will likely attract as many players as it will deter. It’s not for everyone; less so considering the trend toward suggestive and revealing costumes and upskirt panty shots. What I found was a game that took itself just a smidge more serious, with charms that outweigh, even if only by a little, its shortcomings.

The game throws players headfirst into a crash course about its world; within mere minutes of starting, all vital background information that’s needed has been imparted. Special swords, called Furies, can be found all across the land. It is up to select individuals — Fencers — to collect these weapons, in order to resurrect an all-powerful deity. Fencers wishing to bring peace and prosperity to the land are working to resurrect the Goddess, while those with darker intentions have their sights set on a malevolent being known as the Vile God. Inside each Fury lives a Fairy, a magical being that imbues the Fury’s wielder with abilities and attributes. So far, so good. The hunt for the Furies can commence.

The gameplay itself is split between two arenas. Gathering Furies requires traversing Fairy Fencer‘s dungeons, squaring off against some enemies roaming its grounds, and often besting a boss at the dungeon’s end. Between dungeon runs, players spend their time stocking up on supplies and gear, managing quests, and participating in dialog scenes in Zelwinds City, the game’s one and only city hub. The interactions between Fang, the self-absorbed, ego-centric protagonist and his comrades make up the lion’s share of its narrative. This portion of the game plays out a lot like a visual novel; there is zero exploration or really any player agency. All interactions are handled via menu screens: choose the location to visit (store, inn, etc) and select who to talk to. Even then, conversations with regular townsfolk are entirely throwaway, and never in any way related to what’s actually happening in the game. The story is driven forward by triggering interactions between Fang and his party. 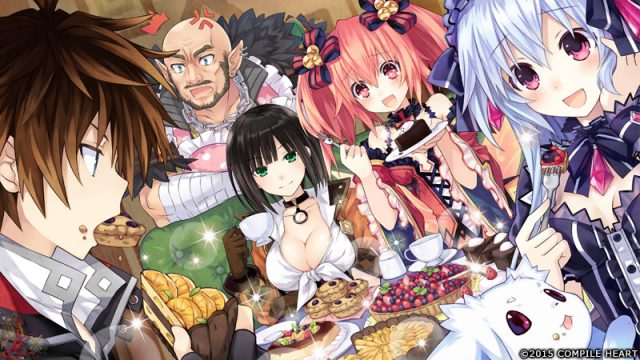 A hand-drawn still conveys the blissful peace of this Bacchanalian feast.

The main characters are well designed, though each of the females, Fencers and Fairies alike, embodies a different male fantasy, from prim and proper Tiara who gets a tingly feeling when she’s verbally put in her place, to Harley’s salacious habit of shedding her pants. However, the characters’ portrayals are good-natured, often humorous, and can be forgiven their stereotypical traits. That said, there isn’t much worth mentioning in the game’s narrative for the first dozen or so hours; Fairy Fencer F requires a hefty time investment before things take a turn for the more interesting. It’s a formulaic grind of “go to dungeon, get a Fury” repeated ad nauseum. At a certain point, the story ditches its by-the-numbers approach and takes on a new dimension, introducing the element of time travel, which mixes up the story and the characters’ relationships toward each other in an interesting way. It seems like a cheap tactic to pad the game at first — sent back to the beginning of the game, players must replay every dungeon again — but depending on certain choices and actions, one of several different story paths actually plays out for the remainder of the game. This revised edition has multiple endings, and it is possible to recruit a few bonus characters depending on the path the player is on.

When not advancing through the story dialog, players will be running dungeons. This is where the game lost its chance at truly standing out, despite all the effort that plainly went into the combat system. The amount of options relating to combat really is vast, and over time, new options open up on a pretty steady basis. Battles are turn-based, following an on-screen turn order. Winning a battle nets each character not only gold and experience, but also weapon points (WP). WP can be used to upgrade a character’s basic stats, like physical attack, magic attack, and range. It can also be traded in to unlock new skills, abilities, magic spells, and combo moves. Each character has a ton of combo moves, which can then be equipped into unlocked combo slots, to be chained together during battle. Furies that have been collected can also be used to increase how much gold, experience, or WP are gained in battle. In a process called World Shaping, a Fury can be stabbed into the map in close proximity to a dungeon, which will then be affected by that Fury’s parameters. Generally speaking, there’s always a trade-off, with each Fury providing an advantage and a setback, for example one may increase the amount of gold earned, but lower the party’s physical defense during combat. Clever use of World Shaping can really help when needing to grind for WP or gold, especially to purchase some end-game gear and abilities.

There is a littany of nuances that play into the combat system. The most important one is Fairize, in which a Fencer fuses together with his or her Fury and Fairy. This can be activated when the Tension gauge has been filled and gives the character a new form for a limited time, adding some extra oomph to all attacks, and even enabling a few Fairize-only abilities. During tougher boss fights, this is an invaluable tool. However, the remaining combat abilities are less useful. Destroying an enemy’s guard gauge leads to characters teaming up in Avalanche Attacks, while Part Destruction can pinpoint specific enemy sections, and Furies can assume different weapon forms to take advantage of enemy weaknesses. Enemies can be launched into the air, attacked from afar, knocked back by certain abilities, etc. Each character also has a unique special ability, like Harley’s “Analyze” or Ethel’s “Assassinate”. The list could go on, but it already illustrates the point: there’s simply too much thrown at the wall to see what sticks; there’s rarely any need to go any deeper than physical combos and magic use, with the occasional Fairize thrown in. The rest simply becomes fluff shamefully left by the wayside. 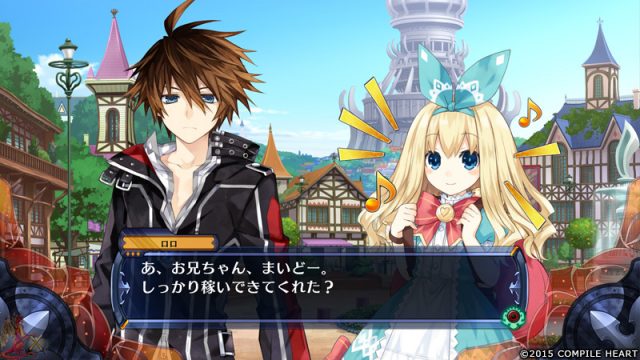 Even with its excessive indulgences, the basics of the battle system are more than serviceable, and everything would’ve added up if not for it ultimately just not being much fun. Very rarely was it necessary to keep a close eye on the turn order gauge to plan ahead; most of the time, wailing away at an enemy or hitting it with MP-consuming abilities proved more than sufficient. Approaching an enemy on the map from the rear or initiating combat with a symbol attack gives the player a full round initiative, but this always seemed to be followed by enemies getting two full turns to retaliate, without break. The worst offender that made combat a rather dull affair was the sheer repetition, not just of pallette-swapped enemy designs, but of whole dungeons. The general rule for each and every dungeon in the game was as follows: 1) Clear the dungeon a first time to gain a Fury; 2) Clear it a second time a short while later for an alternate boss and an alternate Fury; 3) Return to the same dungeon anywhere from one to three more times as part of a fetch or kill quest; and 4) Repeat all of the above one more time after time-traveling to the beginning of the game. Call it repetitive, call it padding; it’s too much of the same thing. Luckily, almost all combat can be completely avoided by simply dashing past enemies on the map, sometimes waiting for them to turn their backs. Entire dungeons can simply be run through with a minimum of enemy encounters, though of course no experience or WP will be collected like this. Boss battles supported this play style, being more than manageable, until game end when a sudden difficulty spike left the party severely underleveled for the last few boss encounters.

It’s a shame, really, because when it comes to presentation, there’s a lot to like about Fairy Fencer F. The character designs are interesting, colorful, and beautiful to look at. There isn’t a whole lot in terms of animation — moving portraits during dialog and a selection of stills during key scenes. However, the art is top-notch and really pops off the screen. The game is at least as enjoyable to listen to as it is to watch. The voice cast does a great job, though they are reserved for the main heroes and villains, and even then only during key narrative scenes, not the incidental asides. Still, in a game this packed with dialog, that ends up being quite a bit. When it comes to the soundtrack, Nobuo Uematsu, along with other members of his Earthbound Papas band, provide many equally catchy and beautiful tunes. Right from the title screen’s classic-era RPG track to the light-hearted theme in Zelwinds City, I often found myself humming along in my head long after turning the game off. As a nice bonus, dedicated players will be able to unlock sound and art galleries near the end of the game, though it does require some farming for rare items.

This updated version of the game includes another welcome new feature with the addition of different difficulty modes. Once players have completed the game for the first time, a New Game Plus mode becomes available, allowing them to carry over levels, abilities, equipment, and so on, but tackle a more serious challenge while experiencing a different outcome to the story. However, the harder difficulty can be accessed at any point during the game, and doesn’t require clear game data to unlock. The battle party has now been expanded to a maximum of six characters in combat at any given time, though enemy numbers and toughness have been augmented as well. Since a normal playthrough of Fairy Fencer F: Advent Dark Force, without unlocking secret characters, nets players with exactly six characters, that means the entire party is involved in all battles, once assembled.

Fairy Fencer F: Advent Dark Force manages to succeed despite itself, though not without some misfires along the way. It features a great art style and muscial accompaniment, with a story that becomes intriguing after a bland and repetitve first act. Its main drawback is a combat system that throws in every feature but the kitchen sink, yet somehow still manages to come up short on fun. Luckily, most battles are totally avoidable, though some grinding may come into play before it’s all said and done.