The PlayStation 2 may be at the end of its lifecycle, but RPGamers are still seeing a nice selection of releases on the platform. One of the latest is the Atlus-published Eternal Poison, a tactical-RPG that was first released in Japan as Poison Pink. The game was developed by Flight-Plan, known for the Summon Night series. Eternal Poison is billed as a gothic fairytale, delving into the realm of dark fantasy, with detailed anime-style characters and a battle system meant for the hardcore crowd.

Eternal Poison‘s story is set in the Kingdom of Valdia, where the Majin (i.e. demon) realm of Besek has just appeared. When players begin Eternal Poison, they choose one from the three starting groups of characters to enter Besek with first. Olifen and his companions are on a quest to rescue the kidnapped Princess Lenarshe. Ashley heads up a group that enters Besek to search for her missing mentor. Thage travels into Besek with a Majin named Raki, supposedly to find the mysterious artifact known as the Eternal Poison. More characters can be unlocked for a total of five unique groups. The game’s characters are stylishly designed, but also have substance to their personalities. They have flaws, secret intentions, hang-ups from the past, and inner demons. Some characters have allegiance to the game’s scheming Pope, others are triple-crossers (or even cross-dressers).

While the idea of Besek — a multi-floor dungeon — appearing in a tactical-RPG might seem at first like just an excuse to have players engage in a progression of battles, there appears to have been a true effort to create a deep world with interesting characters in Eternal Poison. The game’s story is advanced through static dialog scenes that are typical to the genre. However, Eternal Poison does throw in enough surprises to keep players interested and anticipating what will happen next. There is a constant tinge of mystery throughout the game, with odd happenings confusing what is really going on, but as players experience each of the different groups, eventually just about everything makes sense. 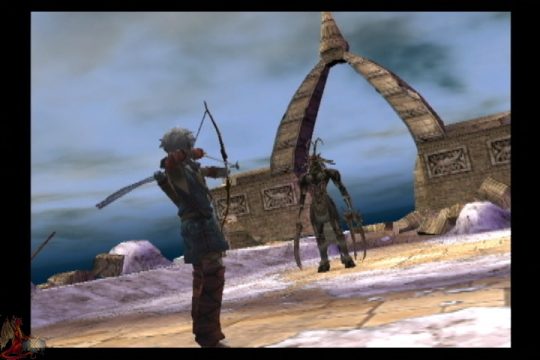 Hopefully, you’ll be smart enough to never see these animations

To some Eternal Poison players, the story may not matter at all, as is the case with many tactical-RPGs. The true value of the game may instead be in the quality of the battle system. Flight-Plan has crafted a solid one in Eternal Poison. The system is easy to understand, but tough to truly dominate in. The basics of a tactical-RPG battle system are all represented, but Eternal Poison focuses on attributes and resistances. Each attack has at least one of three physical or seven elemental attributes, which determines how much damage will be done to a target depending on its resistances. Also slightly different is how units can be inflicted with one physical or mental status effect at a time, whether it is positive or negative.

The main challenge in this system comes from the varied resistances of the Majin the player is fighting against, making preparation before battle and variety in the party’s abilities a necessity. Players recruit mercenaries in Isapolis — the game’s hub — to balance the main story characters which are required battle deployments. It would have been nice if different mercenaries were provided for each character group, but re-using them seems to serve the purpose of the story and makes it easier to figure out whom to bring along. The player’s choice of mercenaries must unfortunately be made early because under-leveled characters can be next to useless against higher level Majin and gaining experience requires a concerted effort for certain characters.

Eternal Poison does differentiate itself in a few ways, primarily with the ability to capture Majin by “overkilling” them — hitting with an attack that does more damage than the Majin has health. This puts the Majin into a disabled state and allows it to be captured. After battle, captured Majin are taken to Isapolis where they can be sold to make new items available in the game’s shop, destroyed to extract a skill, or set for use as an ally under player control in forthcoming battles. This system adds great replay value since battles can only be fought once; Majin cannot be farmed for skills or money. Also, capturing Majin is not always a cakewalk; some Majin will release their disabled brethren or even kill them before players get the chance to use the capture command, adding to the challenge. It requires some number crunching and thoughtful strategy to use the right attacks to ensure that a Majin can be overkilled by the amount necessary, especially for the more powerful boss Majin which can also be captured.

The choices that players are given in regards to capturing Majin are very enjoyable, whether it be what to do with them once captured, or deciding to even capture them at all. One significant problem with the capture system is that, with the exception of one special character’s playthrough, bringing Majin into battle has no purpose other than for a novelty. Majin only remain on the field for a set number of turns, and stronger Majin take up two valuable character slots. A powerful Majin who can be played for three turns is not better than an archer/healer and a strong melee character that will both last for the entire battle. Worse still, on a couple of the characters’ playthroughs, Eternal Poison forces players to bring very specific Majin into certain battles to meet good ending requirements, with next to no foreshadowing of these requirements beforehand. As bringing Majin is useless otherwise, this makes a second journey into Besek necessary for players not hoarding their Majin. Thankfully, after beating Eternal Poison, the game keeps all main characters at their end-game experience levels with all acquired money and items for use in further playthroughs.

The uselessness of Majin is partially due to the slow pace of the battles. Moving characters around the field can feel like a real slog. It is necessary for players to move their units at this slow pace due to the Majin AI. Most Majin will only move when a character moves within a certain range. This makes the path chosen through each stage one of the most important parts of the strategy employed in Eternal Poison. Trying to rush forward to finish a battle faster can result in the player becoming overwhelmed. Majin AI also has a couple of other problems, such as how Majin will sometimes ignore characters who are near death to attack a different random character instead. Overall, Majin AI is decent, and will provide a challenge to players, but mostly because of how they heal themselves or inflict status effects rather than a true strategic ability.

Eternal Poison also differentiates itself by dropping magic/skill points and instead allowing each character and Majin to use its skills a certain number of times per battle (though melee attacks can be used infinitely). Characters learn new skills as they level up, but players can equip new skills gained by capturing Majin into the party’s weapons and armor. This system mostly works great, allowing players to balance their party and to bring along skills of every element, but many skills can be uselessly equipped depending on a character’s statistics. The game’s main characters can change classes at a certain level, which in Eternal Poison basically means focusing their strengths in one type of attack or another. These class changes are nothing like Final Fantasy Tactics‘ job system, but are a small element of customization which adds to the game. 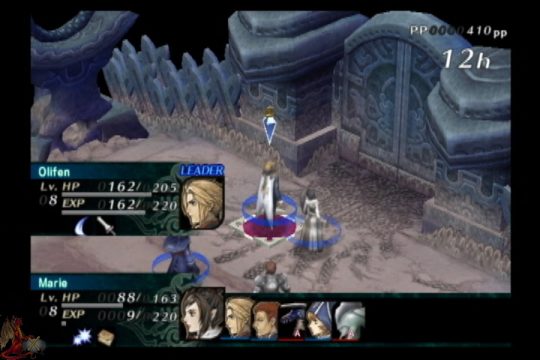 It is unfortunate that equipping skills and weapons can be a real pain in Eternal Poison. Players must scroll through every available weapon in the shop instead of just weapons and armor equippable by the selected character, which becomes annoying since upgrading should technically be done in-between every battle. Another annoyance comes from skills only being equippable while in the shop, while character status can only be viewed at the inn. Trying to figure out the skills that would be best for each character may require bouncing back and forth a few times. Skills cannot be unequipped unless the weapons they are slotted in are equipped, which is just a bother when upgrading equipment. The satisfying variety that the equipment and skill systems provide might be a trade-off for their unwieldy interface.

One of Eternal Poison‘s biggest problems is in the battle animations. With battle animations turned on, every single action other than moving makes the screen change to a blinding white for five seconds followed by a 10-20 second animation. These animations make the game unplayable, and don’t look that great either. Eternal Poison is saved by the ability to turn these animations off. The game suffers graphically without them, as actions are shown instead by very simple 2D effects. In general, the game’s characters also look average, like plastic figurines with three to five frame idle animations. Conceptually, the game’s graphics are amazing, as can be seen in the 79 pieces of concept art unlockable by a simple, but fun mini-game, but they don’t translate into the actual graphics used for gameplay.

The only negative part about Eternal Poison‘s auditory delights is the repetitive cymbal crash used every time players choose a command during battle. The music fits the mood of the game perfectly, from brooding piano and string tunes to smooth jazz. Much of Eternal Poison‘s dialogue is voiced, and the majority of it is well-acted. There is a bit of squeaky voice syndrome to be found, which occurs in many localized games, but in general the voices are believable and fit their characters. During battle animations — which again, players should turn off — a very creepy operatic voice proclaims the name of the Majin involved, which is almost corny, but it works since the Majin are meant to be creepy, after all.

Eternal Poison‘s strengths lie in its above-average story, decent music, and customization options. Battles can be quite hard unless players understand the battle system and learn how to make it work to their advantage. Each combat stage will provide a challenge through to the end of the game, but unfortunately battles do become somewhat repetitive. For those who enjoy the art and the story, a good amount of replay value is there, especially in trying to get all of the good endings to unlock the final scenario. With more battle objectives, an easier interface, and better graphics, Eternal Poison could have truly stood out from the crowd. As it is, Eternal Poison is a solid game for hardcore tactical-RPG fans, and a memorable, but somewhat flawed experience.