Developer Techland has been trying to make a game that feels like an open-world playground for a long time.  With its latest offering in Dying Light 2 Stay Human, the developer gets it mostly right.  A reason for this is that melee combat feels secondary since escaping is easy if the player is fast enough.  This allows the parkour elements to shine, as it is so fun to run around and explore, and there is no time spent standing still.  Adding to this is a day and night cycle that actually promotes doing things differently as time ticks by.  Unfortunately, there are also audio glitches causing havoc, as well as the inability to roll back saved files, which means many key story beats in a long game can be lost.  These issues have already started to be patched, leaning towards a bright future for the game.

When Dying Light 2 begins, the player is introduced to Aiden, a pilgrim searching across the country for signs of his sister Mia.  They were separated after spending time in a lab that experimented on children to find the cure to the newly mutated Harran virus.  Aiden finds some clues that indicate that Mia may still be alive in Villedor, one of the few remaining cities left in this wasteland.  He meets a contact in the city and obtains a GRE key that unlocks many facilities that are otherwise unreachable.  Soon after, Aiden meets up with Waltz, the person who ran experiments on him and his sister.  In the ensuing escape, Aiden gets infected with the virus by a Volatile.  Aiden has free range during the day, but at night time he will turn into an infected if he is not in areas with UV lights or taking an immunity booster.

In his search for Mia, Aiden can affect the city around him with his choices.  Most choices fit into backing either Survivors or the Peacekeepers.  Survivors are the working class trying to survive day-by-day while Peacekeepers are more militaristic and rigid in their beliefs.  Both groups are wary of pilgrims due to their scarcity and rumours of being criminals.  The world changes depending on which areas are controlled by which faction as Survivor-controlled areas provide Aiden with easier parkour routes by adding ziplines and airbags on streets to land on, while Peacekeepers provide traps on the streets to take out groups of enemies at once.  Side quests generally feel self contained and follow a frustrating habit in how everyone distrusts Aiden.  These quests are still worthwhile because some of them can alter aspects of main quests, such as cutting out some filler portions or even offering new choices at the end of an arc.  Aspects of the main story also have issues as shifting motivations for characters come seemingly out of nowhere to cause confusion.  Luckily, these are mostly relegated to the early game as it gets more cohesive and interesting the further Aiden gets into Villedor. 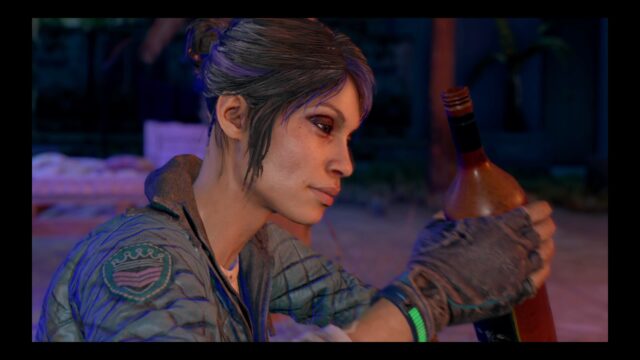 Just having a drink with Lawan.

Story moments are central to one of the biggest problems in the game.  Audio glitches on the PS4 version meant that half the time a story scene started the sound would cut out, leaving only some background noises while subtitles would stop working entirely.  The only way to try and fix this was by a hard reset of the game.  If the story scene completed, the game would auto save, making some emotional story beats unable to be replayed.  Both of these have been patched in to happen less often, but as rolling back is tied to main quest threads, minor moments can still be lost.

Exploring Villedor will take Aiden across the city from its streets to its rooftops.  The game does take a few minutes to load the entire world but everything else is practically unnoticeable on the PS4.  Every building can be entered and looted, with special forsaken buildings and medical labs marked on the map that should only be explored at night because Volatiles roam during the day and cannot be defeated.  During the day, there are crashed military convoys that can be looted, because at night the streets are for the infected and are home to Howlers that, if they see Aiden, will start a chase sequence.  Chases can be handled if the player can reach a UV safe zone, otherwise they keep growing in strength until Aiden is overwhelmed.  Rooftops will often contain gear and supplies that allow for easy creation of medkits or immunity boosters, while rarer loot will need lockpicks to get into the chests to obtain.  Exploring also gives Aiden the chance to find inhibitor containers, specially marked GRE containers that boost max health and stamina for parkour, but also raise immunity to turning into an infected. The balance between these two aspects means that Aiden will generally frequent the streets during the day and rooftops at night.  This causes a simple but effective method to guarantee that aspects of the game are being touched upon, with fast forwarding in a safe zone possible if players want to do something in particular.

Aiden has a variety of skills to take out enemies, from various acrobatic maneuvers, like vaulting over a parried enemy to drop kick another, to powerful melee strikes, plus the option to sneak up on unaware enemies and snap their necks.  The visceral variety of ways that enemies show their damage they receive from Aiden’s weapons is plentiful and well visualized.  AI falters a bit on the streets as enemies can glitch in such a way they won’t move as the player hacks through them with abandon.  This makes a tense street fight turn into a game of contorted charades where Aiden got fed up with their frozen mimicry.  These AI issues rarely happened during story beats, which kept boss fights tense as intended. 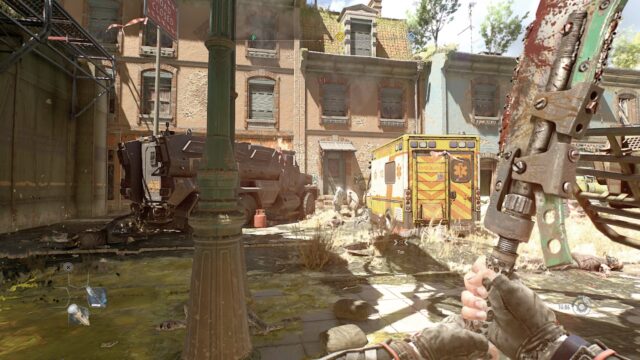 Mopping up the rest of the infected around a military convoy.

The city map is split into sections that detail the level of enemies contained within, but gear will always scale to Aiden’s level no matter where it is found.  Aiden levels up by gaining combat and parkour experience.  Experience is obtained slowly by scaling buildings or taking out enemies, and it ramps up if the player completes a mini quest like saving a Survivor or catching a bandit, or when the player completes substantial side and main story quests.  Aiden can choose a new skill from the corresponding skill tree when reaching a new level in combat or parkour.  Weapons in Dying Light 2 have a durability total that ticks down with each hit.  Upgrading gear for weapons is simple as the rarer a weapon is the higher the durability, adding skills like damage vs the infected and access to sockets. Sockets add elemental damage and are the only way to increase durability on a weapon, so having a few options on hand is vital to survive.  Every piece of armour found will also be a random combination of slot and specialization.  This makes armour more complicated with six slots for headgear, bracers, gloves, shoes, chest pieces, and leggings, and four different specializations, which are medics, brawlers, tanks, or rangers.  This means that the boosts to the player’s skills come in the form of survivability/health, melee attacks, ability to take hits, or ranged attacks respectively.  It is just easier to upgrade based on level rather than trying to customize a particular set.

The game shines brightest when featuring parkour.  This does take a little getting used to as the camera wobbles when Aiden runs and climbs, yet the whole experience becomes exhilarating, as even getting from street level to the top of a building can take many runs, jumps, and climbs, but all of it is fluid and fast-paced.  This makes unlocking safezones, windmills, power stations, and water towers a treat because one incorporates aspects of parkour in different ways that is fun and satisfying, while not having any combat nearby to interrupt.  With traditional yellow paint to help players find the correct paths, the challenge isn’t figuring out complex puzzles, but completing them fast.  Near-death pursuits against the clock work in the player’s favour as they prioritize parkour, and gameovers will pit the player at the beginning of the chase.  As the game progresses, a paraglider and a grappling hook are unlocked, adding to the freedom of movement. 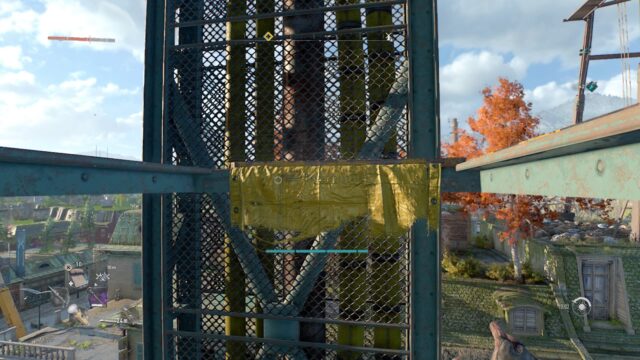 A detailed ledge to help climb up the side of a GRE medical facility.

Dying Light 2 can be completed solo, but there is an option to play co-op multiplayer with up to four players.  This can be done with friends or by hopping in and out of each others games.  The host has the ability to teleport players to them for quests or help, but otherwise the whole world is open to the other players in the game, and they can explore or loot to their hearts content because items respawn everytime the game loads.  There’s also an option that swaps between a more action based interface to one that highlights RPG aspects.  The main difference here being that enemies will have levels and health bars shown on screen in RPG mode, while things are streamlined for the action side, highlighting the horror elements a bit more easily without the numbers on the screen.

Dying Light 2 is a beautiful game, with tons of detail added to every building, and giving each one a sense of height that can be dizzying at times.  Enemies have a decent variety of designs with infected getting the most options, and special infected looking distinct and monstrous.  Bandits and renegades can repeat but luckily NPCs remain easy to tell apart.  The soundtrack is sparse but kicks in during triumphant or heart pounding chase sequences, while letting sound effects create a tense and foreboding atmosphere during quieter moments.  There’s only so many ways the game can voice minor NPCs distrusting Aiden, but major story characters all find their own voices and shine in unique ways even if motivations can seemingly come out of nowhere.  One standout is the feisty Lawan; she’s given some of the better lines and is voiced by the talented Rosario Dawson.

Dying Light 2 is a delightfully fast paced game, which has a few persistent issues bogging it down.  Most issues have already started getting fixed, such as the audio bugs and auto save issues, but enemies being frozen in place and some quests having NPCs make odd choices still drags it down a bit.  Still, even on the older console the game runs pretty great and load times are surprisingly not noticeable.  The main story ramps up well with characters that matter and moments that vary from harrowing escapes to fun fights.  Every moment of parkour is a treat, and combat does just well enough to stay out of the way, with a day/night cycle that varies, meaning there’s always something new to do.  Here’s hoping those issues continue to get ironed out and leave the game to be what it’s best at, a harrowing fast-paced survival RPG with plenty to explore and loot.