A Game Featuring Dragons Has Got to be Great, Right?

The PSP has seen the arrival of many RPGs since its release with more and more coming out in recent months. Dragoneer’s Aria is just such a game. Though it has its high points, several flaws prevent it from being all that it could have been.

The game sees the player trying to save the dragons of the world from the ancient black dragon, Nidhogg. The main character, Valen, is a recently graduated dragoon — a man with the blood of dragons flowing in his veins. After his home city is trashed by Nidhogg he must travel the world to protect the goodly dragons and find a means to defeat this ancient evil.

There is nothing really special with the storyline — it has basically all been done before. Even though it is pretty cliché, the story is quite entertaining towards the end. The scenes between the characters can be somewhat humorous at times, especially between Mary and Ruslan.

The heroes that form your party each have different distinct abilities, but can also be equipped with dragon orbs and various Lusces — items similar to the materia from Final Fantasy VII. The former supplies a hero with both a single target attack and a multiple target attack of the dragon orb’s element and the latter supply the hero with a single spell. Each of these can be leveled a total of ten times to increase its power. Dragon orb abilities are leveled for each character individually, whereas Lusces are leveled and can be traded between characters without losing anything. 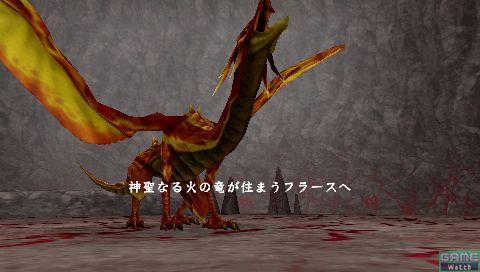 When playing this game the player will be spending the majority of their time in battles. The battles range from very easy to very difficult in challenge due to the way that the game handles the level difference between an attacker and defender. Most challenges can be eliminated by simply leveling past a certain point, but this can become really time-consuming as the experience earned is based on level differential as well. Boss battles can be really time-consuming as well, as they tend to take a good two to three dozen hits to fell.

Battles are lengthy for two reasons: the game simply moves slow in combat, and time needs to be spent gathering mana. Using multiple target abilities in combat can lead to lengthy round times as each target is dealt damage separately with a delay after it. This delay occurs after every action as well. Mana, the resource needed to cast spells and use abilities, is shared by the party and limited to ten charges the entire game. Mana is replenished by using regular physical attacks, using Mary’s Mana Boost ability, or by successfully guarding an enemy’s attack. Abilities always take one charge to use, even at higher levels, and spells can be cast using between one and ten charges. The more charges that the player chooses to use, the higher the level the spell is cast at and the greater its effect. Spells are still limited by the level that the Lusce was leveled to. Spells rarely deal enough damage to warrant their use as the dragon abilities will always deal more damage and cost less mana to use.

Dragon abilities can be chained in battle to create elemental bursts. All four heroes can be included in a chain to get up to seven hits on the enemy or enemies. These chains are not necessary to win the tougher battles in the game, but they can speed them up a bit.

The enemy AI varies throughout the game. Most enemies have an ability that can either cripple or devastate the entire party. When such enemies are fought in groups of more that two, it is always a danger that multiple enemies will use their killer abilities and wipe the party out, regardless of preparedness or levels. This extends to boss battles as well, especially those fought against multiple bosses at once or those with several such abilities that might use them several turns in a row. This leads to frustration and the view that these battles cannot be won. To add further insult to injury, the cut scenes before boss battles can never be skipped and several of them can last quite a long time. This, coupled with the high rate of game over screens the average player will see, can lead to a high rate of frustration.

The battles are extremely strategic in nature. Without a clear grasp of what the party can do, the player stands little chance of surviving the latter half of the game. The players needs to manage their amount of mana while also making sure that the party is dealing damage. The biggest challenge is recovering from the devastating spells that the enemies use. There is a complete lack of multiple target healing spells, so healing is a lengthy and dangerous affair and leads to mana shortages which then must be replenished. 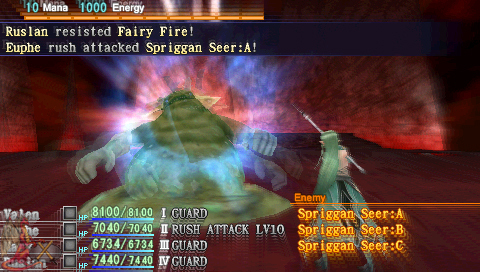 Outside of battle the player can always see the entire map of the zone that they are in, as well as the monsters that inhabit it. When approaching a monster the player sees a generic floating eyeball. These can be examined to see what they are, as well as the challenge rating of the monsters within the group. Higher levels monsters will charge at the party on sight, whereas weaker monsters will flee. These challenge ratings can make huge jumps between adjacent zones which once again leads to frustration, as usually the player needs to level up the party to meet the new challenge.

Each hero has an ability that is usable on the field and can be leveled up with use. These range from stopping the monsters in their tracks to being able to move faster. They are extremely useful to escape from enemies.

Each map is riddled with treasure chests. Some chests can be freely opened and have a chance of respawning on further trips through the area. A second group of chests requires that the party use a certain item as a key to open them, and a third requires that the party have a Lusce leveled to a certain level. These latter two types of chest always contain the better items in the game — weapons, armor, Lusces or recipes. Also on the map are points of interest. At these points powerful monsters can be fought for rare items or items can be found. Examining such a spot can be a gamble.

Dragoneer’s Aria has a simple crafting system. Most recipes can be bought in the various Recipe Shops and require the player supply ingredients either purchased in shops or harvested from slain monsters. Some recipes can also be obtained in trade from townsfolk or from scattered treasure chests. As every item in the game has a minimum level requirement to be used at, crafted items are always more powerful than similar level shop-purchased items. The ingredients are often a pain to collect as there is no monster list in the game that lists what enemies drop. Crafted equipment can be tailored to each individual character and at the end of the game prove instrumental to ensuring the survival of weaker party members — if the player is lucky enough to have found the ingredients necessary to make these items.

Dragoneer’s Aria has a decent selection of music tracks and the sound effects are well done throughout the game. Even the voice acting is above average and it can be switched to the original Japanese if the player desires. The only glaring issue is that the battle music gets repetitive after a good chunk of the game, but this can be said of most RPGs.

The character models are very well done and the monsters are varied enough between zones to remain interesting. Within a zone it is common to see several versions of the same monsters, each with different color schemes and ability sets. The town areas and outside zones are all very attractive with some of them looking downright amazing. Special effects within battle can be a little bland.

There are three major graphical problems found within the package. The most glaring is the low-quality animation found throughout — it almost seems like some frames are missing as the characters will jump just a little. This was true for both friend and foe. The second issue was that in battles the player never sees a hero and a monster at the same time, let alone both parties. Each action in battle focuses the camera on the character initializing the action and then the target in turn. It is really awkward and seems weird for the duration of the game.

The final graphical issue has to do with the dragons. For a game that advertises the presence of dragons, these mighty creatures are anything but mighty and interesting. They give no impression of awesome power found in other venues and are terribly animated to boot. Anytime a dragon shows up it is hard to stifle a laugh as they simply look that bad.

The menu system is easy to use both inside and outside of battle. The player will have no problems figuring out where things are. In battle everyone’s last action will be remembered further making it easier to play. The only problem is the separation between weapons and equipment — they are listed as two entries on the top level of the main menu. Also, a weird issue occurs with the in-game clock — it does not stop when the PSP is in sleep mode which can lead to 200-hour playtimes.

All in all, Dragoneer’s Aria is an enjoyable game even though it has a lot of flaws. It will appeal most to those that enjoy level grinding and long strategic battles that can go either way at any time. For those players with friends who also have this game the pot is sweetened — there is an adhoc mode with extra missions. For those that are looking for something with an excellent story, they should look elsewhere as Dragoneer’s Aria delivers a passable performance, but not a stellar one.