RPGs mean different things to different people. Some wish for in-depth, systems-laden combat simulators, controlling the minutia of a party of character to lead them to victory. Others want an expansive world to explore, hoping for a secret dungeon in the mountain or a magic sword hidden in a crypt. Others still want a cast of colorful characters that they get to meet and grow with over an incredible journey. Disco Elysium aims for something smaller and more intimate, but no less intriguing. It offers very little in the way of traditional combat but plenty of struggle. The world may not be an expansive, globe-trotting ordeal, but the small game world is filled with detail and care. The game is filled with colorful characters, but many of them are varying degrees of unlikable, including yourself. Disco Elysium’s harsh and bleak tone, combined with its odd mix of grounded reality next to exaggerated characters, makes it a unique entry in the genre, but even ignoring all that it is one of the purest RPG experiences in years.

Disco Elysium takes place in Revachol, an Eastern Bloc-inspired city that is still suffering from the effects of a revolution decades earlier. The player controls a man who wakes in a hotel after a major bender to discover he has completely lost his memory, as well as the ability to perform some basic motor functions. After a struggle to make it downstairs, he is approached by a cop named Kim Kitsuragi who claims to be his partner, seeking to discover what happened to the dead man that the player character was sent to investigate a week ago. Lo and behold, the body is still where it was discovered and seemingly very little headway has been made into the investigation. Hungover, in the throes of amnesia, and missing any clear identifiers of what happened the previous week, players must work to solve the crime while navigating the socio-political climate of Revachol. 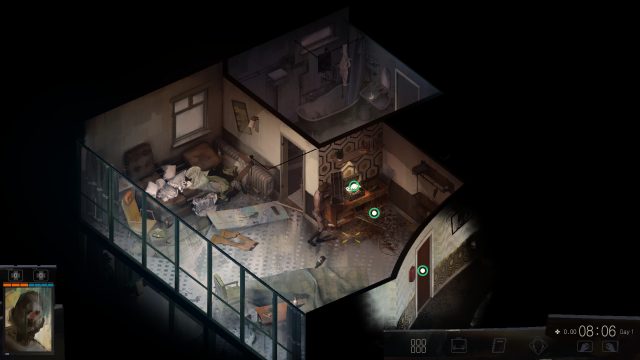 Welcome to your hotel room. Yes, the damage is your fault.

The game begins, like many RPGs, with character creation. While there is no option to create an avatar of the player’s choice, the player is given a large amount of freedom to fill out statistics as they see fit. Attributes are split among four fields — Intellect, Pysche, Physique, and Motorics — each with six distinct stats. Twelve points are available to spend on each field, with each point raising both the base level of all the skills within that field as well as the potential increases to each skill through leveling up. Additionally, players get to choose one signature skill, which again increases its base and potential growth. The sheer amount of information given is initially overwhelming, but it’s difficult to make a character that isn’t viable, as the way the game handles conflicts and their resolutions means that plenty of stats get an opportunity to shine, even the ones that don’t feel useful at first.

The way Disco Elysium handles resolutions is one of its two shining features. The game is played from a traditional isometric perspective and feels more like a point-and-click adventure game much of the time. While the game does offer smaller, more succinct points of interest, many of the game’s interactions will provide paragraphs of flowery detail. It’s here where skill checks present themselves, serving as the main obstacle for the majority of the game. The checks are usually tested against one of the twenty-four stats on a scale that goes up to twenty. The way checks are resolved is simple; the game rolls two six-sided dice and adds the total to the player’s skill level. If the number meets the challenge level, the check is a success. The game provides the odds of success before any check, though rolling two ones or two sixes will always result in a failure or success, meaning the result is never completely guaranteed. It’s a straightforward system, but where it shines is in its level of reaction it has with the game world.

There are plenty of opportunities in the game world to play around with these numbers. For starters, stats can be temporarily altered through the use of consumables. Equipment tends to just be variations on regular clothing, but it also offers stat alterations, usually one or two positive changes as well as one or two negative ones. After that it starts getting more interesting. Conversations are less about exhausting all options and instead learning which are the right things to say, as many things said can hurt or improve somebody’s opinion. And while there generally aren’t as many options when dealing with the environment, the same rules apply. This means that investigating the area, learning about the people in it, and exploring every nook and cranny can have a direct, often positive impact on what is possible in the world. 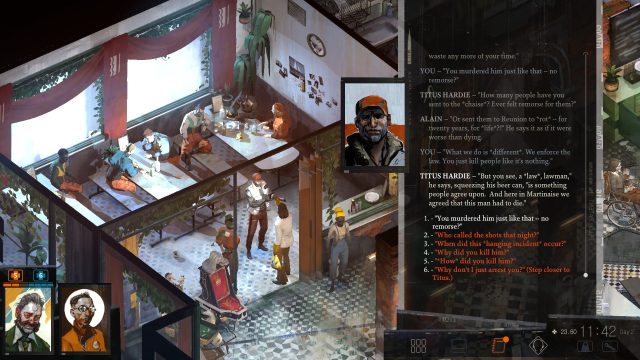 Most of the local folk don’t take kindly to police.

There are two types of checks, red and white. Red checks are one time only checks; if failed they can never be reattempted and often lock the player out of the path that follows. They also tend to be made more often while under duress and are a bit more challenging to anticipate. White checks can be retaken, but only after players increase the associated skill or discover new information that can make passing the check more likely. Most of the failed checks thus become an obstacle to overcome or a path to uncover. Getting past these checks, and even just looking for ways to improve the odds, remains a great point of motivation. The skill system is easily among the most engaging things about the game.

Leveling up grants a number of points, which can be spent to upgrade skills alongside other uses. One of these involves a Thought Cabinet, a representation of the player character’s brain space. Throughout the game, players will come across different mindsets and have the opportunity to adopt them. These mindsets are processed by equipping them in the Thought Cabinet, which often provides temporary stat negatives until a certain amount of in-game time has passed, after which they become a permanent part of the character’s psyche and the full set of alterations are applied. Initially only one can be processed and it costs a skill point to unlearn a processed thought, but skill points can be spent to increase the total up to twelve slots. It’s best to think of the Thought Cabinet as the game’s perk system. It’s not make or break for progress, but it does offer some additional role-playing and a nice layer of flavor to characterization.

Making additions to the Thought Cabinet also makes use of the game’s time system. Disco Elysium keeps track of the time, but in a unique way. Time only moves forward when speaking with someone or interacting with the environment. Standing still or running around will never make the clock move forward. Since the game is technically on a timer, one more concerned with actions than the literal passage of time, the game is always moving forward and at no point is there ever a concern of where to go next. And while the game isn’t very difficult, the ticking clock pushes just enough against the player to make it feel like a race against the clock. The journey will likely last between twenty and thirty hours, but at no point does boredom set in; there’s always something else to do. The game is a slow burn, but it’s a perfectly-paced one. 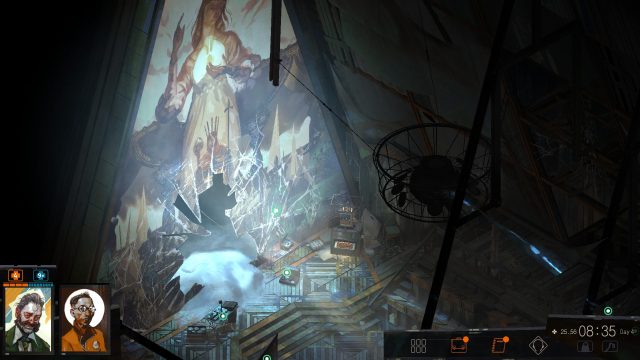 Even the destitute Revachol can find some beauty, if ruined.

It feels almost shameful take so long to mention the game’s writing, its other shining accomplishment, but there’s a lot more wiggle room for someone to fall off here. Favoring verbose and flowery prose, Disco Elysium is a writer’s game that will enthrall anyone on board and just may exhibit some eye rolls from those not won over by its grungy and filthy aesthetic. It’s one of the best-written games in quite some time, but there’s definite room for someone to find it overwritten or even repulsive. In spite of that, engaging with all the characters is the heart of the game. The wide variety of people on display is the best hook the game has. Even tertiary characters feel real as they share their entire life story at the drop of a hat. The game masterfully weaves learning about the townspeople while learning more about who the player character used to be, simultaneously delivering world building and character building all at once. In another stroke of brilliance, each of the game’s skills are also their own characters, mentally butting in on conversations to try and direct players toward their preferred outcome. This culminates in one of the more subdued, yet truly wonderful, scenes that serves as juxtaposition to all of the previous events in the game that would have felt cheap in a more uplifting story.

Despite its namesake, Disco Elysium doesn’t feature much in the way of disco music. The score is pleasantly atmospheric, with many of its sounds mimicking the crashing of coastal waves or the mechanical grind of the nearby shipping depot. Certain locations are given more melodies to work with and though there is a concise number of tracks, they remain in the memory as a welcome reminder of the experience. The game’s signature horns are going to stay with me for quite some time, if nothing else. Rather than aiming for photorealism, Disco Elysium uses great art direction to be distinctive and often beautiful. Though characters may look merely serviceable, the environments and illustrations bring the game to life in much more convincing ways. Especially character portraits, which have a water-colored, modern art look not too often seen in video games.

I was blindsided by how much I enjoyed Disco Elysium. Developer ZA/UM succeeded in making a game where progress isn’t tied to the defeat of, say, four hundred rats in a sewer, but to thoughtfully engaging with the world and characters it has to offer. It presents a reactive and messy world, occupied by people with needs, desires, and prejudices rather than NPCs with repetitive sage advice. There is a certain emptiness to the game, a sense that despite all efforts there is no fixing the underlying problems that plague the inhabitants of Revachol. The poor are still poor, union leaders fight for better pay, scabs take their jobs, and the rich businessman on top takes advantage of all of them. But dig deep enough and you’ll find some hope there, too.