Gotta Brush You Off My Shoulder

Blizzard franchises and demonic hordes have a lot in common. Both are always lurking just out of sight waiting for the right moment to burst forth and wreak havoc across the landscape. The current bursting havoc comes in the form of the console port of Diablo III, a sequel that while a long time in the making, still feels like it stepped out of the past.

The story begins with Azmodan and Belial, two Prime Evils that left before the band really made it big in Diablo II, doing what Prime Evils do in the mortal world: blighting the lands, corrupting the people, unleashing monstrous hordes upon the innocent. It’s up to a crew of mortal heroes to save the day despite an apathetic heavenly host. The story really hasn’t progressed beyond ‘Demons = bad. Go kill all the demons’, but the presentation has improved somewhat. There are fewer exposition dumps than prior installments and player characters have dialogue responses, meaning there’s room for some banter between PCs and follower NPCs. The plot even manages a couple of twists and surprises, even if one of them is a bit predictable. Ultimately, the plot and characters are flat, only there to provide a solid series of excuses to kill monsters and take their stuff.

Playing through the game, it can be difficult to recall that this is a port of a computer game. Moving across the map feels natural and having attacks and abilities mapped to the face and shoulder buttons is preferable to hotkeys. In addition to online play, this port also features same screen co-op. Battle.net is great and all, but Diablo‘s multiplayer has always sung in a LAN party setting and couch co-op is a great way to experience this game. That being said, sharing the same screen with others is a trifle limiting. Anytime anyone wants to check their gear, which is often, it halts gameplay for everyone, and any player trying to move to the edge of the screen without everyone else will find themselves sprinting in place while the rest of the team plays catch-up. It all gets annoying. The port is also surprisingly flexible, there are numerous options for how gamelay action is displayed on the screen. Difficulty levels have been added to standard mode which can be toggled from the home screen. From there, story progress can also be reverted, allowing for a chance to repeat boss fights or plot beats. 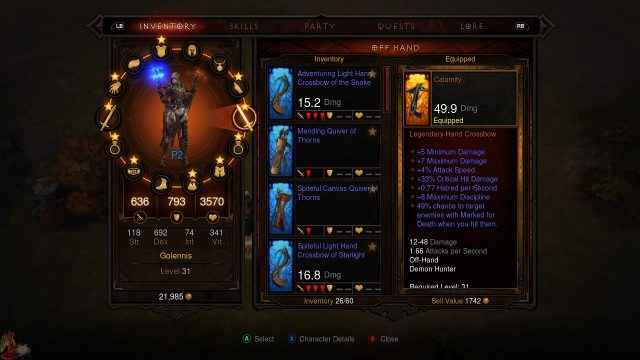 Pictured: Someone else’s gear screen. You’ll see a lot of these in co-op.

Any sense of strategy in prior Diablo titles and their imitators tends to boil down to mashing the best special attack available and hoping the potion supply holds out. Here, however, potions are on a cooldown timer like any other powerand instantaneous healing bubbles drop from fallen foes. This means the game becomes more about out pacing mobs, positioning and managing class specific power resource as the face buttons are mashed. There is as much incentive to push forward in the form of XP boosts as there is to hold back and wait for powers to refresh and health to return. This might be the most tactically-minded third-person looter ever.

Of course, the key to winning any fight is on the training ground, not the field. Character advancement comes in the form of special abilities in a variety of flavours (special attacks, defensive powers, passive perks), which can be modified with runes that may alter, amplify, or otherwise season those effects. None of these are locked in, so characters can be respecced on the fly as situations vary. Combined with a pleasantly wide range of bonuses from gear, customization becomes less about piling the biggest numbers up and more about experimenting with various ways to win. For example, my fiancée plays for straight up damage on single targets while my character messes around with damage over time and life gain abilities across an area, and both of us have progressed through the game swimmingly.

At the same time, the whole game boils down to cleaning up demon mobs. There are few special enemies that mix things up, but for the most part bad guys just cluster around players at melee range and it is up to gamers to finish them off as best they can. Outside of a few bosses no encounter is truly memorable. It can be very easy to fall into a rut. Clearing two whole acts of the game with a rote of Leap, Battle Cry, Rend, and basic attacks to finish off the straglers can get a tad mindless. This setup might make for a better play experience than other third-person looters, but for all of Diablo III‘s improvements the core feels like a game I’ve played a half dozen times before. 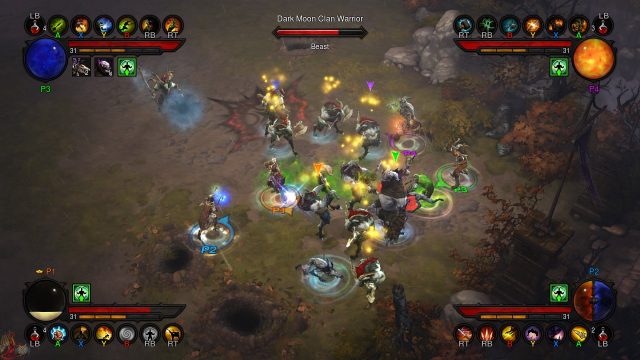 Visually, D3 is somewhat lacking. While each area has its own look and feel that pops off the screen, some of that identity comes from repeated art assets. This is inevitable in procedurally generated dungeon environments, but no one should have to see the same lectern next to a library layout three floors in a row. The number of new monsters that are mere reskins of old monsters is a little too great for comfort. Meanwhile, the audio is also bland. Voice performances come across as wooden and hollow, and while the cutscenes have a few standout tracks, the in-game music was so lackluster that muting the television in favour of the BBC Radio version of The Hobbit was not a good sign.

Diablo III has been a long time coming, and in that time there have been many others to use the franchise’s formula. There have been so many that they approach being a sub-genre unto themselves as opposed to just “Diablo clones”, so this specific instance feels less like a new Diablo and more like another Diablo. This is not a great game, and it isn’t really all that special. It is a good game, though, especially if you have some friends around to share it with.