Perhaps It’s Time to Get a Watch

I’m a product of a simpler time of JRPGs, or perhaps it was just a simpler time in my own life, when role-playing games of the 8-and-16-bit eras were first discovering how to tell an engaging story and ended up producing some of the greatest representatives of the genre, even to this day. So when a game comes tugging at the strings of nostalgia, my attention is easily piqued. Nippon Ichi’s latest effort, Destiny Connect: Tick-Tock Travelers, is precisely such a game. With a time-traveling story, turn-based combat system, and cast of characters that could have been lifted from such classics as Chrono Trigger — complete with robotic party member — it’s a shame that it is ultimately let down by an unengaging narrative, extremely tedious gameplay loop, and a combination of a lack of challenge and crushingly high encounter rate.

The game takes place entirely in the little town of Clocknee, where time stops as the year 1999 gives way to the new millennium. It is up to pint-size heroine Sherry Aldeis, along with her friend Pegreo and robot protector Isaac, to lift the curtain and discover the cause of Clocknee’s plight. Isaac, it quickly turns out, has the capability of time travel, and so the trio travel to Clocknee’s past, present, and future in order to set things back on their course.

All that sounds good on paper, but in practice the narrative leaves much to be desired. Unravelling the mystery behind Clocknee’s plight is far from satisfying, and pieces of the puzzle — something about a machine revolution of largely household appliances that have gone unappreciated for far too long — are revealed in ways that don’t connect well together sensibly. Instead, the game busies itself and its cast of characters with pointless, unoriginal side tracks. The first half of the game consists of finding ever new ways of fixing Isaac’s time travel ability after almost every time jump, while the latter half is padded with banal collect-a-thons, like having to criss-cross Clocknee multiple times to collect memories left behind by Sherry’s dad. The story’s climax is even put on the back burner near the game’s end in favor of a lackluster fetch quest forcing players to run around to collect paper and writing implements in order to assemble a diary. When the central conflict finally returns to the forefront, the game is already in its home stretch, so it feels like a case of too little, too late. 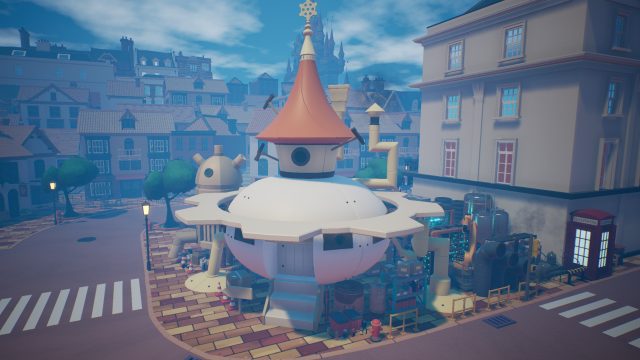 Looks quirky enough. Now if only there was something interesting to actually do with it.

During all of this, the game’s main conceit, time travel, is largely relegated to a throwaway secondary role. The three time periods offer nothing unique or of value to the experience; they’re just areas to walk or run through on the way to the next uninteresting story event. Future Clocknee, in particular, is woefully underutilized, as players will spend barely any time there over the course of the game. There’s no catalyst driving the player to explore a new area or time period; everything simply happens because the objective on the map screen says it does, including time travel. The only thing of any consequence to come out of visiting different eras of the town’s history are the two characters met and recruited into the party along the way: Truth from the past, Altana from the future. But even here problems arise, as Altana is extremely underdeveloped and Truth, like Sherry herself, is frequently petulant and largely unlikeable.

Outside of enemy encounters and following the main quest, Clocknee simply offers nothing to do: no side quests to complete, no interesting locations to explore, no townspeople to interact with. Just battle after battle, and an awful lot of backtracking the same city streets and park pathways. Each of the town’s handful of locations must be visited time and time again to get the next item or visit the next location in order to advance the story; a fast-travel mechanic does, at least, exist, though skipping combat also means losing out on money that’s sorely needed to keep up with character growth and equipment purchases. Past and Present Clocknee are similarly devoid of interest, while Future Clocknee is a literal wasteland that may as well have been omitted altogether. Considering its promising story setup, it’s sad to see how little pays off as the game unfolds. Some of the potential behind the story shines through occasionally during its final moments, but these just serve to highlight the missed opportunities. The game really needs a more fleshed-out world for the player to care about, with things for the characters to do and hardships for them to overcome. As it stands, detailed set-ups or pay-offs are sorely lacking, and the world feels emptier for it. 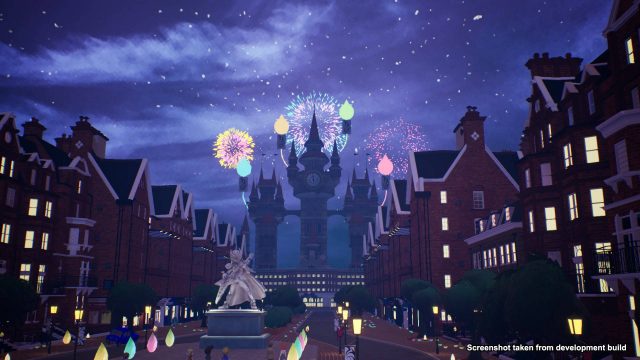 There are less visually arresting nights to have a total time freeze occur.

With a fairly high encounter rate, combat represents the game’s biggest time sink. Enemies are visible in Clocknee but spawn frequently, at times even directly on top of the player. The turn-based combat mechanics here are interesting, particularly the integration of Isaac’s varied combat forms, and could have served to make this aspect of the game worth the price of admission had they been properly taken advantage of. But it all falls mostly flat due to a very low difficulty threshold that gives players no incentive to experiment with different forms, party makeups, or each character’s full list of available abilities. In fact, there’s little reason to ever change up the battle party at all, further sidelining ancillary characters that join the party during its time travels. The level cap of fifty can be reached long before setting foot in the final dungeon, making combat unnecessary from that point on. Leveling itself is oddly implemented, as all characters, even those not in the current party or knocked out during combat, gain equal amounts of XP after each and every battle, so the entire party always levels up at once. It’s a shame not more thought was put into making combat an engaging experience, since the last dungeon and final boss do, finally, feature a challenge level that makes them far more intricate than anything that has come before.

Destiny Connect may not offer much for players to do, but at least it looks the part, with colorful and inviting character designs that are endearing and humorously animated, cementing that image of being reminiscent of that old favorite childhood game. Clocknee looks good, particularly the night sky of Present Clocknee with its frozen-in-time New Year’s fireworks. Character models feature a pleasant glossy plastic look. Enemy designs are, at first, similarly intriguing, all representing some form of household machinery. But as the game drags by, the amount of palette swapping becomes evident. It’s easy to lose count of how many different forms of the same toasters, ovens, TVs, and ceiling fans one has faced during the game, with bosses eventually being repurposed as common enemies and vice versa. 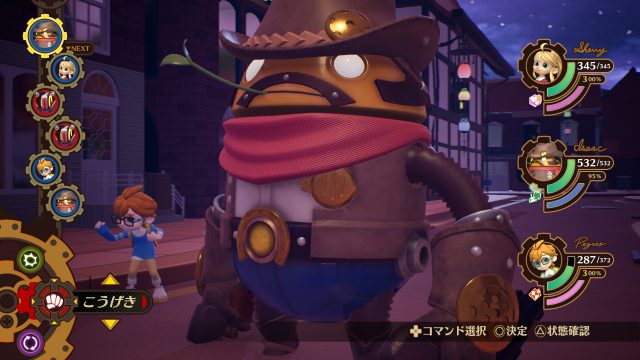 Isaac’s combat forms are a cute wrinkle to the combat system, but rarely worth the time to change into them.

The game is accompanied by quite a lovely musical score by composer Yukinari Irumagawa, starting from the opening main credits until its final moments. Fitting with its themes of childhood, family, and friendship, the score is comprised of orchestral melodies that are both pretty and peaceful. Merely the combat music, due to its heavy repetition, gets old all too soon. There are no voiceovers, but what is missed most are sound effects during narrative moments that feel somehow flat without them. Having nothing but text to read during dialog is fine, but the brain notices, even if it may not realize it at first, awkward silences during tactical actions that should have produced some audible sound.

At first brush, Destiny Connect by all rights appears to be successful in what it seems to have been created for: provide a cute, fun, and polished throwback game for both modern audiences and those who remember the older console generations fondly. The issues with the game don’t become apparent immediately, but do rear their heads before too long, causing fatigue with the bland, aimless narrative and frustration with the repetitive and simple combat. Time travel is a tricky thing, and in Destiny Connect’s case, the only fond memories I’m left with are the good times I’ve had with the games that were its inspirations.