Crystar is an interesting title. Developed by Gemdrops and published by FuRyu in Japan before Spike Chunsoft brought the game to western shores, Crystar follows a girl fighting her way through Purgatory in order to save her younger sister. The game tells an engaging story, but repetitiveness and mediocre combat hold it back from being a heavenly experience.

The main protagonist of Crystar is Rei Hatada, who awakens in the form of a butterfly in the many-layered world of Purgatory. After managing to regain her human form, she faces hostile creatures called Revenants. Rei gains the power to fight back against the Revenants, but when she comes across her sister Mirai and a woman named Anamnesis, the resulting encounter causes Rei to lose control, killing Mirai in the process. In her despair, Rei is approached by Mephis and Pheles, who call themselves the managers of Purgatory. In exchange for Rei continuing to fight against Revenants and collecting crystallised tears called Idea, they promise that Mirai can be revived. During her quest, Rei picks up three more allies, and the group heads through the layers of Purgatory to catch up to Mirai before she reaches the Cogs of Renewal and her soul is reincarnated as someone else.

Crystar’s gameplay is split into missions called Ordeals. Each chapter has three story-focused Ordeals, with an optional bonus mission granted after completion for the purpose of grinding experience or resources. Most Ordeals require players to explore three floors, each usually filled with multiple paths and numerous encounters against groups of Revenants, though there is almost always at least one choke-point. While individual Ordeal aren’t particularly long, there’s usually very little to differentiate one Ordeal from the next, and things get repetitive fast. 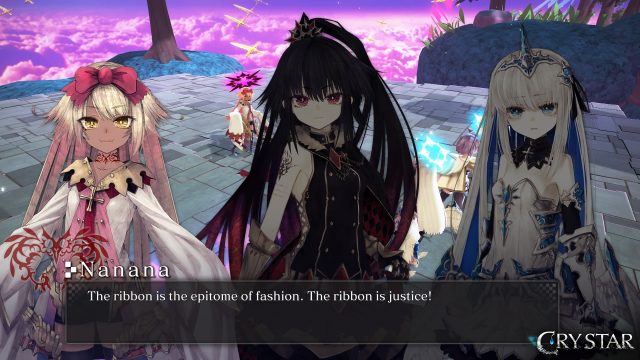 It’s hard to argue with that logic.

The repetition is not helped by the straightforward action combat system, which fails to evolve much over the course of the game. Though up to four characters are in the party, only one is active at any time. Players can swap the active character with a simple press of one the directions of the D-pad. There are some differences between the characters, but all are controlled in the same way and the same tactics apply to all of them, so there’s not much incentive to try and keep mixing it up. Inactive characters receive 80% of earned experience points so they’ll never be far behind if the preferred character is removed for plot purposes.

Most of the combat involves using simple combos of regular and power attacks, with the occasional dodge using the right trigger thrown in. On top of this, each character can have four SP-using skills equipped, which are activated by holding down the left shoulder button and pressing one of the face buttons. A tear gauge in the bottom left corner is filled by hitting enemies and when this is filled, the character can summon their Guardian for a short time to increase their power and launch a special attack.

The best that can be said about the combat is that it’s quick and functional. As with the general structure of Ordeals, the combat is repetitive, and it’s not helped by a limited number of enemy types. There are also some annoyances when trying to switch focus to particular enemies. Crystar is not a very difficult game on its normal setting, especially if players keep the stock of auto-use items replenished, though some bosses at least require a bit of thought and attention. 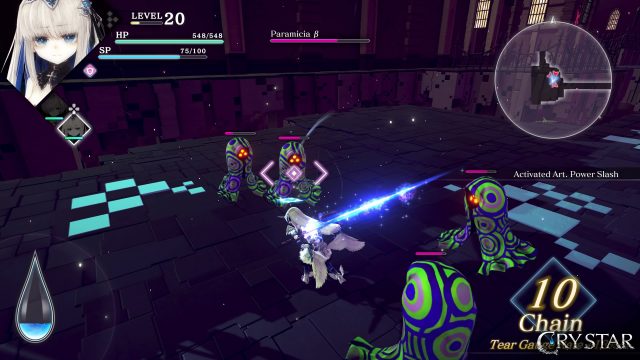 Outside of some story elements, the theme of crying comes up in equipment. Certain enemies drop Torments, effectively death cries that linger in Rei’s heart. When back in her room after each Ordeal, Rei can cry to release these Torments, which become Sentiments that Rei and her allies can equip as weapons and armour. These Sentiments can be combined with others of the same type to upgrade them, using materials found during Ordeals or purchased from a shop. The system does an adequate job of providing a short break from Ordeals, without being otherwise notable.

One of Crystar’s stronger points is its story. The party members get some good growth throughout the game, particularly Rei, who starts out as a shut-in caring only about her sister, and the evolving way she treats her allies. There’s always a good, driving sense of mystery and uncertainty as to what is going to happen next and certain conflicts will be resolved, though a number of reveals are a touch obvious before they happen. The game takes some inspiration from Ancient Greek philosophy in its wider themes, which is carried over into using it as a naming convention for bosses and other elements. A focus on a suicide early on will make many uncomfortable, though sadly it feels more like a tool to advance the plot rather than anything of deeper consideration.

The biggest issue players will likely have comes at what initially seems like an ending. However, rather than rolling credits, the game displays a prompt that a new story is unlocked, and pushes the player all the way back to the beginning. Fortunately, it’s not as frustrating as it could be, as after the first few scenes, the game skips forward to the third-to-last chapter, though players are still forced to replay those final chapters multiple times. The reward for players doing this is some extra story examining some different elements and leading to different — and seemingly deliberately unsatisfying — endings before getting to the true final chapter. The problem is that there’s simply not enough added by these new scenes and the final payoff to counter the annoyance at having to replay those maps. The actual ending manages to provide some satisfaction, at least moreso than the non-endings, but it also just hand-waves away some big issues and leaves major questions unanswered. The game has engaging characters and an interesting story at its heart, but wobbles a bit on landing, without enough strength in its gameplay to justify the hoops it requires players to jump through. 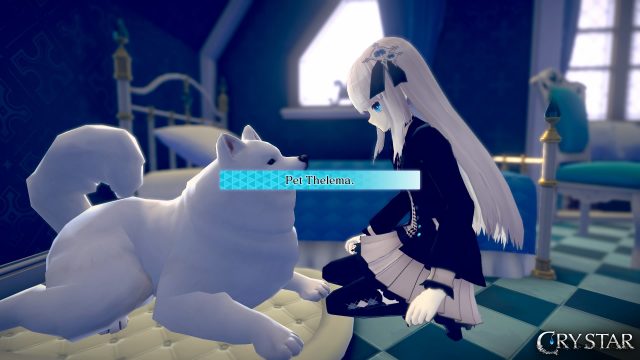 Spike Chunsoft has done a good job with its localisation, and there are decent performances from its English voice cast. Brianna Knickerbocker does a good job as Rei, and Kayli Mills’ performance as Nanana is also worth pointing out; in lesser hands she would have come across as an annoyance but manages to evoke more of a sense of fun to lighten things. The music is a good complement to the rest of the game, with generally understated tracks that add to the atmosphere rather than being at the forefront of the experience.

The game doesn’t try and do too much with its gameplay engine graphics, but uses its designs in ways that are visually pleasing throughout. Conversations are handled through visual novel-style portraits. There’s good variety in the different levels of Purgatory across chapters. The game instills a nice visual style, with a particular focus given to the eyes of the character designs and making effective use of artwork from manga artist Hajime Ueda for flashback scenes.

Crystar ends up as a bit of a mixed bag. The interesting ideas, story elements, and audio are let down by generally mediocre gameplay, which is particularly exacerbated when its most repetitive portion is forced upon players for very little story benefit. There’s enough about it that many will find plenty to enjoy, particularly on the narrative side of things, but there may not be too many streams of joyful tears.