Spike Chunsoft continues its well-received invasion onto western handhelds thanks to Atlus’ decision to bring over Conception II: Children of the Seven Stars, a game in which players produce magical children with multiple heroines in order to send them into dungeons. It’s a game that was never going to take itself entirely seriously, acting as a send-up and homage to dating sims and visual novels combined with some Persona-esque random dungeon exploration. There’s certainly fun to be had, provided players aren’t bothered by the gleeful use of dating sim tropes and female characters offering potentially bothersome levels of fanservice.

Conception II is mostly set in Fort City, which is located on the world of Aterra. The city’s academy is a special one where only those who have the ability to use Star Energy used in defence against invading monsters are granted attendance. The main character, named by the player, is discovered to be brimming over with so much of the ether fuelling Star Energy, that in accordance with a prophecy the title God’s Gift is granted to him. Star Energy only manifests between the ages of sixteen to eighteen, and these students along with the academy are needed to act as mankind’s defensive force, with Fort City’s planners making the curious decision to build on top of an inactive Dusk Circle, otherwise known as the mysterious locations from which monsters emerge. Unfortunately, no one so far has been able to enter the Dusk Circles to close them due to the lack of ether inside, but the extraordinary amount produced by God’s Gift allows the protagonist to go inside along with the heroines and their magically-created Star Children in order to stem the tide of monsters.

The turn-based battle system is partially grid-based, with enemies taking up the centre of a square, and the party setting up shop around the edges. Movement between grid spaces is a free action for the player, though enemies use up a turn should they need to move. The party consists of up to four teams: one consisting of God’s Gift and the heroine accompanying him, and up to three groups of Star Children which contain a trio of the progeny. Each of these teams acts almost as a singular entity; a command will use that team’s turn rather than individual instructions for each member. There are a few highlighted areas of depth brought to the table involving chaining an enemy to unleash combos and the speed with which the party can act. However, in the vast majority of cases it seems more worthwhile to focus on simple damage dealing than attempt to actively manipulate these factors. The method for determining turn order is rather obtuse and subject to randomness, and the option to guard seems to have a negligible effect at best. The battle system works effectively despite these problems, making good use of positioning and skill choices, and is a decent use of the turn-based template. 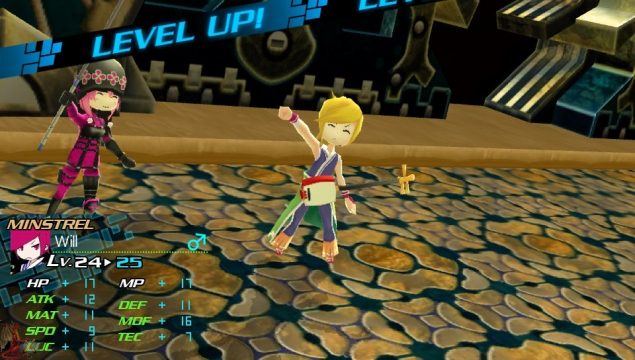 Amongst the most adorable bodyguards around.

Conception II‘s labyrinths play out as a series of randomly-generated floors inhabited by shadowy enemies. Each chapter features its own story-based labyrinth that advances the plot when completed, and sometimes one or two optional areas for additional dungeon diving. Labyrinths are generally enjoyable, with the visual aesthetic decently varied between them, although the longer ones toward the end of the game begin to approach tedium. The game is usually more than happy to replenish healing item supplies in the chests liberally scattered around each floor, so it’s rare that players will be forced to leave a labyrinth half-completed if they don’t want to. It could’ve been tiresome trying to keep tabs on equipment for all eleven party members, but fortunately the game provides a more than welcome option to equip the best gear on all characters in one go. Further user-friendliness comes in the form of handy auto-battle and animation speed-up features, the first allowing for a small selection of tactical options that the AI follows pretty intelligently against weaker foes.

The game’s biggest differentiator comes with the incredibly adorable Star Children. Star Children are given a class by the player immediately after being born, with the classes available dependent on the potential attributes of the Star Child at birth, which in turn are determined by the heroine used for the Classmating ritual and her feelings toward God’s Gift. Players can grant each Star Child independence in the form of freedom from further dungeon exploration, after which the Child will go to work within the city, levelling it up and granting more facilities to God’s Gift, an option further encouraged by giving Star Children a max level. There is something just inherently enjoyable about running through corridors and rooms with many tiny minions in tow, especially with the random cute comments they’ll make while in dungeons. 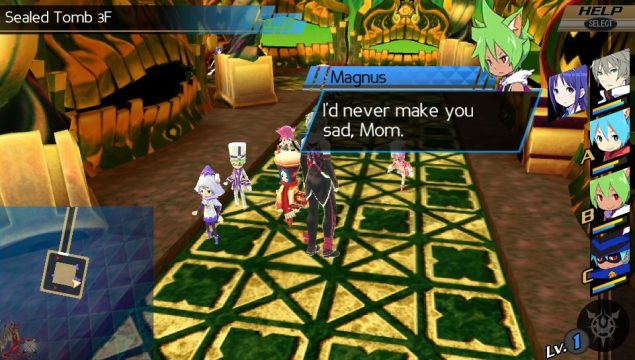 All together now, “awwwww.”

If the prerequisites are met, the Star Children can also combine to form a Mecunite, which can be useful in a tough battle but never seems worth the bother to use when the vast majority of battles will be over by the third round. Difficulty is also not particularly high; early parts of the game are almost trivial in their lack of challenge, and this stays true through the first half of its thirty-hour length. In the latter periods things start to ramp up a bit and those who have not spent time cultivating Star Children will find things a bit tricky, but this can mostly be rectified by keeping a steady supply of the easily available MP-replenishing potions. Bosses are almost trivial, not being a huge leap up from regular labyrinth battles, although an exception is of course made for the final boss.

Conception II‘s story gives the impression of an homage to visual novels and dating sims, which is either a blessing or a curse depending on how individual players feel toward the more amusing, fanservice-type content, such as the inevitable breast-size comparison conversation that makes an appearance very early. Even conversations about unfortunate pasts find themselves susceptible to innuendo and other suggestive phrasing. At least the game slightly attempts to even up the score gender-wise with a bit of “Classmating”, which just seems to be an excuse for certain characters to apply romantic tones to the relationships between the main male characters. There are a few attempts at giving the overall story surrounding the Dusk Circles some twists and depth, although those familiar with the usual RPG or visual novel tropes won’t find them too surprising. That said, there is enjoyment to be found in the story, and while it never challenges the upper echelons, it ably does the job of keeping interest in seeing how things turn out.

The Classmating ritual displayed is about as suggestive as could be gotten away with. The actual ritual itself sounds relatively harmless, described as requiring the heroine to just think about God’s Gift while touching hands. The game chooses to display it with a few seconds of a barbie-doll anatomy heroine in somewhat suggestive poses (getting steadily more suggestive as the game progresses) before giving way to two hands with fingers intertwining, rounding it off with the heroines being rather exhausted afterwards. It should just about straddle the line of tastefulness for most, but it’s probably not something that players would want to be on their screens in public settings. 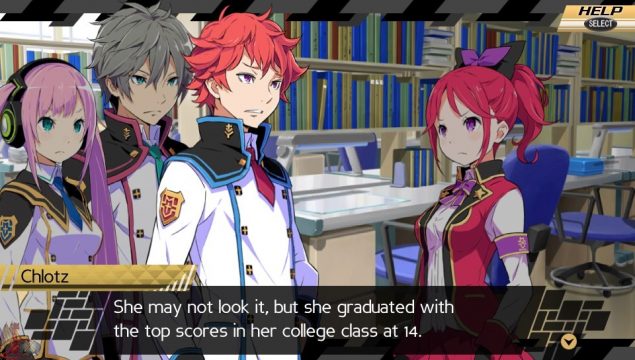 The teacher, improbably the same age as the students, is amongst the main cast.

The game’s narrative does somewhat better in its interactions with the heroines, each of whom has her own dating sim-style story arc. Things do get a little odd sometimes, but in a fun and entertaining way, although none of the game’s characters stand out as being particularly strong. They are at least all rather heartwarming, even with the excessive amount of blushing while God’s Gift attempts to set a record for remaining oblivious while they attempt to convey their feelings. As can be expected from the dating sim routes, each heroine gets her own ending, with a non-specific normal ending and a harem ending also available when playing a New Game Plus, which allows players to start from either the very beginning or from near the game’s finale.

On the looks front, Conception II does a pretty good job, although some could be repelled by its brightness and use of garish colour. Labyrinth schemes and enemies are decently varied even with significant palette swapping, and the chibi-like Star Children are incredibly cute. Rather than settling for the standard static portraits in VN-style conversations, the game uses 2D-models that are constantly moving to simulate breathing. It makes a couple of characters look like they’re bobbing along to music, but in general it does make the conversations a lot more interesting to look at. Conversations with individual heroines go for the full 3D-model effect, which doesn’t work as well thanks to the expressions being a bit over-the-top along with the ladies’ aforementioned knack for blushing like ripe tomatoes. Masato Kouda’s soundtrack is very enjoyable to listen to, being pretty upbeat for the most part but working very well with the game’s visuals and gameplay to keep things engaging and interesting. The English voice acting is a little bit disappointing, however, as it all sounds a bit forced and archetypal, particularly on the heroines’ side. While this may be intentional as part of the send up on dating sims, I found myself much more interested in reading the text rather than listening.

The overall feeling that endures throughout Conception II is that it’s a game that is by no means bad, but also not great. There’s plenty of enjoyment to be had if players aren’t bothered by the high levels of fanservice involving the female characters, but outside of the occasional bits of the Star Children being adorable, there’s nothing that particularly wows and calls for much attention.