Citizens Unite! Earth x Space is a game that on one hand states something ambitious with its title but falls short in execution.  On the other hand, each game separately is an enjoyable, if flawed, experience.  Developer Eden Industries brings together a combination of two previously released titles Citizens of Earth and Citizens of Space, with additional characters and an overarching side quest that is purely optional.  The game allows for a button press to swap between games, this is done to collect a few new characters and some treasure.  Character designs are unique and top-notch, and combat while traditional and grind heavy is interesting based on these designs.  Changing between the two concurrently, can be tiresome and the new experiences do not add enough to make it worthwhile.

During their time in both Earth and Space the player’s come across a new foe, the Chronies.  Led by Boss Tock, the Chronies are out to destroy the timeline set by the victories of both the Vice President in Citizens of Earth and the Ambassador of Earth in Citizens of Space.  The Vice President’s main quest leads him to find out what is happening to the Earth’s wildlife and people start to act strange and aggressive just after winning the election.  The Ambassador’s main quest is to restore Earth after it disappears just after joining the intergalactic assembly.  Each game plays out the same, with only minor conversations with each of the Chronies tasked with collecting a Book of History.  These books were stolen from one of the games new additions, the Librarian who records all history in books.  When defeating a Chrony in either timeline that has a book the player then has the option to go to a mailbox found in most major town locations in either game leading back to the Librarian.  These mailboxes transport to the Librarian’s room to return the book, which reveals a new treasure located in the other timeline.

Collecting the books is purely optional, as the game plays out the same even if no books are returned to the Librarian.  Swapping between games is entirely optional as well as one entire game can be completed before ever touching the other game if the player chooses.  Treasures obtained from the books appear in locations of the other game in comparable areas of progression in the other game.  Following the new content leads to frequent game swapping to obtain each treasure as soon as possible.  Deciding this is the player’s choice and has no bearing on the story at all and books can be collected in any order as there’s no real story connecting them together, just a series of loose time-based puns.  The treasure is helpful for the new characters and can make them overpowered for some dungeons. 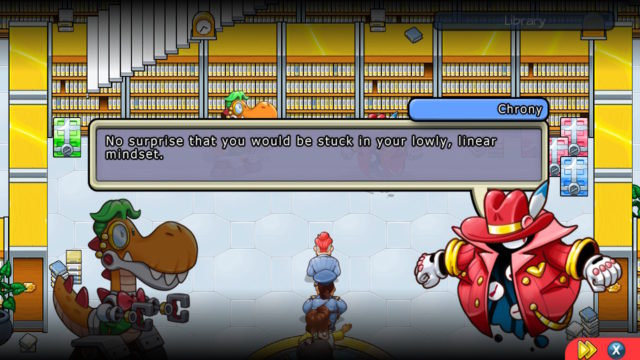 Each game provides the player with the ability to now collect 44 citizens, as previously each game had a total cast of 40 citizens.  New additions in both games are the Librarian and the other game’s main character.  Earth rounds out it’s cast with two additional secret party members, while Space also gets two with one joining combat and the other maintaining a support only role. Characters are collected throughout the game by completing side quests.  Collecting the characters is a rewarding experience for their utility and fun designs.  The way the cast acts is a mixed bag, with them acting little more than a one-note joke on their job with the occasional pop-culture reference thrown in.  This sense of humour can work great and at times does elicit a chuckle, but all too often finds itself trying too hard.  Even if every joke hits and gets a laugh, the characters themselves never really evolve beyond pun-based admiration for the main character.  Each main character’s journey is done well in their own games and they have a lot of growth, it is a shame, however, that other characters are not given any growth or development of their own.  This makes the new cast even more tacked on as they get the same minimal treatment and both main characters gain nothing story-wise from taking on the Chronies.

In Citizens of Earth, characters only gain experience when being a part of battle.  Combat also flows more traditionally with a menu of skills, the first row of skills provide additional energy while subsequent rows of skills subtract energy.  New characters join at a set level that is often far below optimal, requiring plenty of grinding for experience.  Chronies appear in random encounters in both games throughout and will rare drop one of the books of history.  The biggest difference in combat between the two games is the optional timed-button presses that can be turned off with a character talent in Space.  Each character has a different mini-game based on these button presses to complete the strongest version of that attack.  Combat party members are fewer, and all gain experience at the same time. The option to swap in and out is there to provide more flexibility.  Non-combatants in Space provide the Ambassador with a set of skills based of a magic point pool the game calls Charisma in which skills are used once and Charisma Points are slowly regained over time or turns in battle. 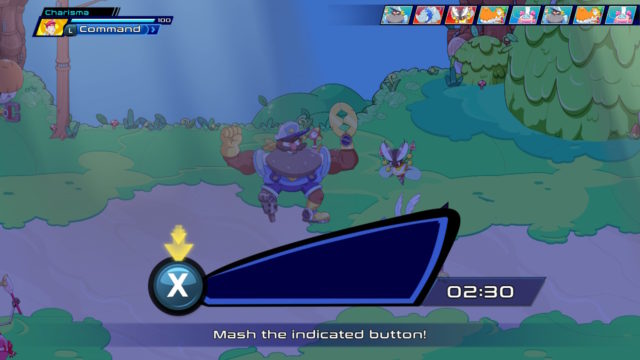 Captain’s looking to put a clamp on this enemy.

Talents in the game range from anywhere shop-keeping, to using skills on the world map to unlock new areas with treasure, to changing the frequency of random encounters in Space or altering the weather on the world map in Earth.  Some talents are needed for progression, but most just add convenience.  Talents are upgraded via experience from encounters, making it easier to max out talents in Space than in Earth overall.  One shortcoming to this in both games is collecting books sometimes needs fully evolved talents from potentially unused or unrecruited characters.  This is troublesome for collecting the secret characters as the game doesn’t provide hints as to where they are found or that books are required to unlock them.

In Earth running around the map is set in a traditional manner with current party members trailing behind the Vice President as he runs around easily.  In Space, the Ambassador’s talent is to charge through boxes.  While he moves faster, it is difficult to steer, and has lead to many crashes and fights because of the extra unnecessary movements.  In Earth enemy combatants can be seen on the screen and charged into or avoided accordingly as they move around or chase after the player.  In Space, there is a radar that goes from green to yellow to red as the player moves.  When the radar is in red, combat soon follows.  Quest tracking is simple with different coloured buttons on the mini-map to help track where to go, including to find where each book of history holding Chrony is.  Chronies holding books are always shown on screen, and this is the only time they are seen on the world map.  At times established rules for most of the game such as not being able to cross lava or a riverbank will one time suddenly be required for progression, leading to frustration.  This is a simple design flaw that carried from the original releases of the game. 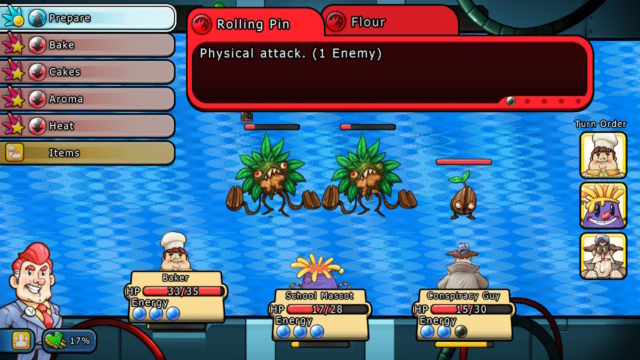 Just taking a rolling pin to some unruly coffee beans.

Citizens Unite! Earth and Space looks polished, and each character, enemy and NPC on the screen has a distinct look and feel that is noteworthy.  Locations are varied in both games with an interconnected world in Earth to multiple worlds in Space, but are brought to life more from the stories than the visuals themselves.  The music is serviceable in both games with no individual track standing out but nothing also grating.  Both games have voice lines though that can easily get repetitive.  One can only hear the Vice President say in combat “there’s only one left” and “way to go” so many times before it is burned into memory.  In Space when the Ambassador crashes into things running “Whoa!” is heard every time adding to the frustration of the run mechanic.  Outside of those repetitive phrases the voice acting can be commended.  Every character is brought to life with an exuberance or comedic flair that makes the one-note cast charming at times.

Citizens Unite! Earth and Space has largely been mentioned as two separate games.  That is because both games are played entirely separate and, except for a bunch of side-quests added in with a few new characters and encounters, nothing has been changed to either game to make this content feel like it needs to be there.  With no payoff to the game-hopping the release feels longer and is just a detriment to two otherwise average games.  If neither game has been played before this is a handy collector’s pack but there is no real need to delve too deeply for returning players unless a collect everything attitude is undertaken.  The games look nice, with vibrant character work and their own unique feel in combat and talents, but with minimal character growth to them beyond mere caricatures it feels more chore and bore, than bringing in an excite to unite.