Brigandine: The Legend of Runersia Review

It felt like a fever dream last year when Happinet announced a new Brigandine title was in the works. The original game has become something of a myth since procuring a legal copy in good condition tends to cost a pretty penny these days. With Brigandine: The Legend of Runersia, a follow-up that comes twenty years after The Legend of Forsena, I made it a priority to add it to my collection.

Brigandine: The Legend of Runersia is a strategy RPG that focuses around the six divided nations on the continent of Runersia. It is up to the player to decide which ruler’s story they want to explore, and seeing each country’s story from its own point of view gives the game a good deal of replayability. The motivations to conquer Runersia differ from country to country, such as the United Islands of Mirelva wanting to expand its wealth by commandeering the other provinces, or the Shinobi Tribe wanting to break free from the other countries to become its own sovereign state. Brigandine can feel like classic board games that deal with global takeover, and that’s perfectly fine.

Each campaign starts with the player’s selected nation holding a small collection of forts. Each nation is represented by a unique color that occupies its territories, and to win the game players must systematically eliminate each country until they are the last nation standing. The stories are nothing groundbreaking, but the sheer number of unique stories, and a branching path near the end of the game, offer plenty of content to enjoy. Depending on the difficulty, the allotted time to conquer Runersia changes, and gives players the freedom to pick the setting matching their comfort levels. Those who seek a challenge can tackle the hard difficulty and try to subjugate the land in two-and-a-half years (or 60 seasons), but the easy mode still offers a decent challenge while giving players much more opportunity to go at their own pace. 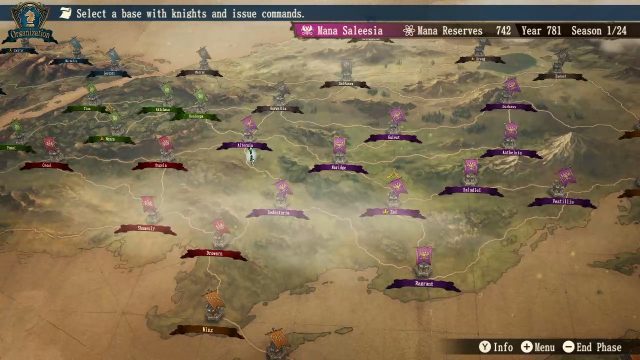 Each region and ruler has their own reason for wanting to take over Runersia.

There are two phases to each season. The first is an organization phase, where players can move units, buy and revive monsters, arrange teams, promote and equip characters, or send unused party leaders on quests where they can gain experience, items, or even new units. The second is the attack phase, where units that are next to enemy territories can invade and try to claim that base under their nation’s banner. It’s a good idea to have at least three units in any base that lies in direct contact with any opposing territory because enemies can also freely attack any base they feel like, and an empty base will be captured without a fight. Once both phases are completed, the season is over and a new one begins.

The organization phase is a pivotal part of making sure the attack phase goes in the player’s favor. Each occupied location provides different monsters to recruit, though moving units takes one season, so it can be tricky managing a full-scale attack against the other nations while also upkeeping teams. Fighters known as Rune Knights act as team captains in Brigandine. The lack of a way to view the full unit list hampers players’ ability to effectively manage their forces. There is also a one-hundred monster limit, which means there is no way to fully deck out each team. Limiting the number of storable monsters serves little purpose other than to have some Rune Knights ill equipped to participate in battles.

Battles are fought on a hexagonal grid with a limit of three characters able to be deployed per fight. Each Rune Knight has an area that extends out around them a certain distance. Any controlled monsters that wander outside the extended field is weakened, so it is important to keep forces in formation to avoid suffering penalties. Some narrative touches appear in combat via verbal barbs between opposing Rune Knights, while the rulers will have some interesting conversations with one another prior to battle. There are other units that can participate in these moments, but their conversations are a rare treat since they are so obscure to find.

Each location has its own terrain, and players will be wise to take this into account given units have their own preferences. Roads are most common and are generally neutral, offering no bonuses or penalties; however, a forest unit that fights in water will suffer a stiff penalty in their accuracy and evasion. There are also elemental advantages, and equipping gear can add to an offensive or defensive boost to certain elements. Surrounding an enemy unit is the best way to guarantee landing hits, as it creates a visible chain engulfing the enemy which raises critical hit chances and accuracy. There are some attacks that cannot be used if the character moves, which greatly hampers mages as it leaves them with only paltry attacks if they decide to move anywhere. A fast-forward button is also available for those that want to speed up battles. When enemy captains fall in battle or retreat, their monsters leave with them, but any left behind on the battlefield will join the player’s side. 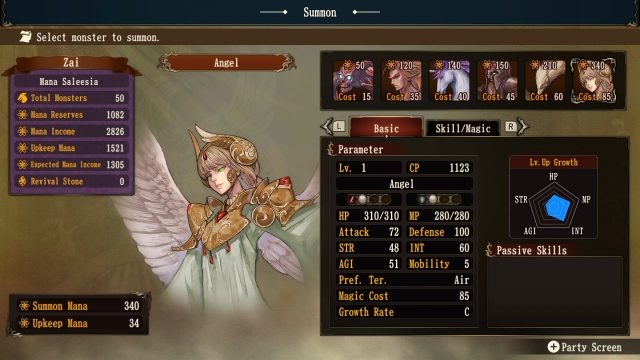 It’s very common to see a zero next to the number of Revival Stones.

The ruler of each nation tends to be a top unit in Brigandine as they have better stats and get more unique abilities than the rest of the characters that join. There are a few other unique characters, but for the most part all the Rune Knights will fall under the same few job classes. Rune Knights have a mana pool that determines how many monsters can be under their command. If the monsters under their control exceed the maximum, the entire team suffers a statistical penalty. Thankfully, mana capacity can also be increased by leveling, equipment, and items.

The main way to get items is through quests, which randomly gifts an item to deployed Rune Knight. The other way to get items is by beating an enemy commander and having them drop a random piece from their inventory. Revival Stones are the only way to revive fallen monsters and are rare finds. Sadly, newly recruited monsters start back at level one. Equipping a unit with four pieces of matching rarity will grant it a stat bonus. Quests are also one of the few ways to recruit new Rune Knights. The other method happens after eliminating a rival nation, which prompts a few stragglers to join the winning side. Most Rune Knights have a decent introductory story, but not much else is fleshed out beyond their recruitment pitch.

A Challenge Mode is unlocked after beating the game once that lets players pick any ruler and any Rune Knight they have unlocked. This mode is enjoyable to tinker with, with the list of commanders growing after each subsequent campaign run, showing how large the game’s cast is. Once their commander is selected, players are placed on their nation’s capital and tasked with conquering as much of the world as they can, being graded based on speed and performance. 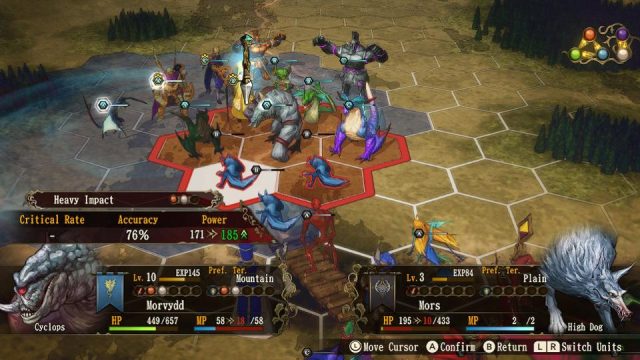 Have monsters stay within the Rune Knight’s aura or they will suffer statistical penalties.

As far as graphics go, Brigandine is not pushing the Switch’s limits. Character models look crisp when the camera is zoomed in, but animations and map layouts are not too exciting. Most Rune Knights, other than the rulers, look generic. It can get confusing to determine which monster units belong to which nation without hovering over each. The character artwork and the still shots during the story segments are all well done and each nation and its subjects looks unique.

Composer Tenpei Sato returns after working on Brigandine: Grand Edition, a 2000 remake of the original game. Sato does a good job of giving each nation a unique melody, while also providing music that fits the different scenarios and battles throughout the game. The voiced lines are all in Japanese, with no option to change to a different language, but the voice actors are hearty and their emotions fit each scenario well enough.

Brigandine: The Legend of Runersia was a fun experience, and with six different campaigns to explore, there is plenty of room to replay and enjoy multiple playthroughs. This game definitely scratches that strategy RPG itch, and even offers an adjustable difficulty to match just about any player’s desired challenge level. The Switch could certainly benefit from more proper strategy RPGs in its library and Brigandine feels right at home. Fans that enjoy planning out total domination should certainly check out this one.