I Heard Jack’s a Bad Mother…

When Borderlands 2 first came out, I was a bit disappointed at how closely it followed the formula of the original. While the series took its storytelling to a whole new level, it wasn’t until a few downloadable content packs had been added that the game’s incredible value potential really showed itself. Borderlands: The Pre-Sequel feels very much the same way. The game, as it exists now, feels somewhat incomplete. It’s much shorter than even Borderlands 2 was at launch, making it more of an expansion than a full-blown sequel. That said, it does a number of things very well, and mixes it up just enough to warrant its place in the Borderlands franchise.

The aptly named Pre-Sequel takes place shortly after the events of the original Borderlands and immediately prior to the beginning of Borderlands 2. The game abandons the world of Pandora for the first time in the series’ history and takes place instead on the planet’s moon, Elpis, as well as the massive Hyperion space station, Helios, that orbits it. The new vault hunters, including the somehow-formidable Claptrap, enter the employ of a Hyperion programmer named Jack, who works with them to prevent the Dahl Corporation from using a giant laser to destroy the moon. The story details Jack’s descent into madness, which ultimately led to his reign of terror in Borderlands 2. The moon is also filled with British people for some reason.

The Pre-Sequel does some interesting things with its storytelling, taking a few cues from the Assault of Dragon Keep Borderlands 2 DLC, but overall it doesn’t quite match up to its predecessor. There are fewer side quests, the main quest is significantly shorter, and the pacing feels a bit off. When players reach the Helios space station about two thirds of the way through the game, the story takes on a blistering pace, and the side quests in each area seem at odds with the plot’s sense of urgency. There’s still a lot of great humor to be found, but even the characters simply aren’t as memorable as those introduced during Borderlands 2. 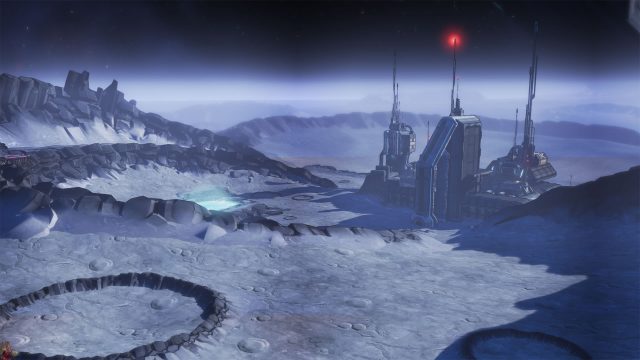 The Moon: It’s a real dump.

Thankfully, The Pre-Sequel makes a number of additions to the gameplay that, despite their gimmicky nature, actually alter the game in a truly remarkable way. The slag weapons from Borderlands 2 have been removed (for story reasons) and supplemented with new laser and cryo weapons. Laser weapons are an entirely new class, complete with their own ammo supply, and come in an impressive variety of types, from the Ghostbusters-esque beam weapons to the shotgun inspired splitters to the powerful, sniping railguns. Cryo weapons, on the other hand, add a useful fourth elemental type to the existing trio of shock, corrosive, and incendiary, and comes with the added bonus of immobilizing those afflicted with it. While both of these additions add a nice level of variety to the existing Borderlands staple, it’s the environmental changes that truly bring The Pre-Sequel into its own.

The other major addition to the gameplay comes in the form of low-gravity environments coupled with a lack of atmosphere in many areas. To deal with the latter, players will discover “oz kits”, which provide a limited oxygen supply and somehow protect exposed flesh and bodily fluids from the deadly effects of the vacuum at the same time. In addition to allowing the player to breathe in space, oz kits have another useful function: the so-called double jump. This term, as it’s been advertised by Gearbox, is actually somewhat misleading, as it’s not actually a true double jump. What it is, rather, is the ability to release oxygen from the kit to propel oneself in any direction, an ability that is far more useful. Amazingly, this seemingly innocuous ability actually fundamentally alters the way players will tackle encounters throughout the game. Tactical players will find themselves using their aerial abilities to take the high ground or propel themselves across the map, and they can even perform a “butt slam” to damage enemies in an area. Thanks to the addition of low gravity, players can remain in the air for longer and leap higher than ever before, making battles just one step off from those imagined in Ender’s Game.

Beyond that, it’s still Borderlands, which should be all returning players need to hear. There are four new vault hunters to choose from, each with their own unique skills and talents, and there are a bazillion more guns to search out. Due to its shorter length, the number of unique weapons seems to be significantly lower than what can be found in Borderlands 2, but it’s almost a certainty that future DLC installments will offer up plenty of new options. That said, the drop rates on rare and epic weapons has been significantly increased, and vending machines throughout the game are always stocked with at least one item of rare or higher quality, making it that much easier to find quality gear. Players can also “grind” their weapons, turning three useless guns into a new, (hopefully) better one. This process is pretty random, however, and I discovered early on that it was almost always better to simply sell useless weapons for cash and selectively purchase new gear from the improved vending machines rather than take the gamble with the grinder. 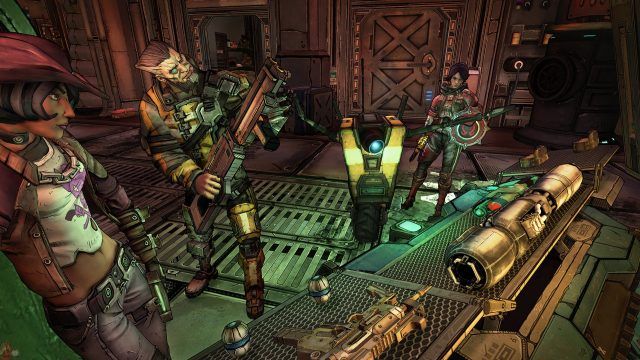 What idiot thought it was a good idea to give Claptrap a gun?

The low gravity setting seems to have inspired Gearbox’s level designers, because The Pre-Sequel features some of the best areas in the series. The most notable of these is the Veins of Helios, which exists entirely on the outside of the Helios space station. The design of this area makes incredible use of space and features huge drops, moving platforms, and jump pads that can send players flying. A number of areas feature impressive hidden secrets that can only be accessed with clever and unconventional use of the game’s oz kits. Unfortunately, the visual design has suffered somewhat as a result as well; with so many zero-atmosphere areas, the game’s visuals are not nearly as vibrant or diverse as those of Borderlands or Borderlands 2. There are a lot of crater-pocked moonscapes and industrial facilities, and an almost complete lack of plant life. This isn’t necessarily a bad thing, as it does paint Elpis as a very different place from Pandora; however, players seeking variety may find themselves disappointed.

Interestingly, The Pre-Sequel does something new with its music to reinforce this space-age setting. While the Borderlands series has featured fairly unremarkable background music for the most part, The Pre-Sequel changes its style up a bit to more accurately reflect its stark, grey environments. It actually sounds remarkably like the score of Mass Effect in terms of style, which lends itself well to the space station and lifeless moon players will be exploring. Whether this was meant as a parody or not is hard to say, but it works exceptionally well. As always, the voice work is terrific, and as I noted earlier, the game features an unusually large number of British people, including an adorable, Dickensian street urchin.

Like Borderlands 2, The Pre-Sequel often feels like a fairly safe sequel, but the gimmicks Gearbox chose to use this time around actually worked surprisingly well, far better than I had originally anticipated. Though I think we’ll have to wait until the DLC starts rolling out to see what this game truly has to offer, for the moment the opportunity to witness the rise of Handsome Jack ought to be enough to satiate most Borderlands fans. Even though it’s shorter than Borderlands 2, it still has a decent length at 25-30 hours for an initial playthrough. That said, the promise of future DLC and inevitable price drops make it difficult to recommend at this juncture. It still feels more like an expansion than a standalone game, and I suspect that, like Borderlands 2, it’s a game people will be playing and talking about for a long time to come.