Blue Dragon: Awakened Shadow, a DS follow-up to the Xbox 360 original, certainly had a lot of potential. Created by an amalgamation of several well-known studios, including both Mistwalker and tri-Crescendo, the title certainly had the pedigree to be great. Unfortunately, sometimes even the best developers screw up, and despite a handful of solid ideas, Awakened Shadow is a poor game filled with clunky mechanics and an atrocious localization.

Taking place in the aftermath of Blue Dragon, Shu and his comrades now live on the various cubes suspended in the middle of their former planet. The player takes control of a self-made character who awakens from a long slumber with no memory. Simultaneously, a mysterious light appears that sucks up everyone’s shadows, removing their ability to fight monsters. Everyone’s but yours, that is. As the only person left with a shadow, it’s up to you to figure out who you are, what happened, and how to get everyone’s shadows back.

Despite Blue Dragon‘s unique and well-imagined world, the story is by far the worst aspect of the game. Thanks to an absolutely abysmal localization, the characters are without personality and the plot is not nearly complex enough to get by without them. Add to that innumerable typos and grammatical errors, and the entire thing is laughable. And these aren’t minor ones, either; they’re huge and extremely noticeable. The most egregious is characters in the game regularly referring to the main character with plural pronouns such as “they” and “them”.

The gameplay isn’t much better. Blue Dragon: Awakened Shadow sports an extremely simple and horrendously clunky action combat system, and while it offers occasional moments of fun, most notably during boss fights, the majority of the time it’s simply dull. Combat is literally controlled entirely with two buttons. One button attacks, and the other blocks, or dodges if you’re currently moving. Skills can be used by holding down the attack button for a few seconds, which charges them up, at which point specific ones can be selected from a menu. This is literally the entirety of the combat system. 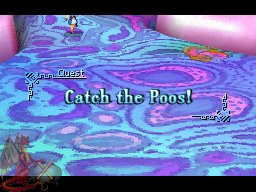 This simplicity unfortunately causes more than a few problems. For one thing, items, a usual staple of RPGs, are almost completely abandoned. The menu cannot be opened during combat, and thus healing items cannot be used during combat. The few healing items that do exist can only be used outside of battle, when they’re generally not needed. There are also several items that provide various buffs, and these are likewise relatively useless since they have to be used preemptively, before you even know whether or not you’ll need them.

The biggest issue this causes, however, lies with character death: there are no resurrection items in the game, and even if there were, you wouldn’t be able to use them when it mattered. Likewise, there is no resurrection spell in the game, at least not during the level range required to complete the game. Very late in the game an auto-revive skill is acquired, but it can only be used on the character that casts it, and it arrives far too late. When a character dies, you must simply wait for roughly thirty seconds for them to automatically revive. This becomes particularly troublesome when the main character dies, as ally AI is incredibly stupid, and you basically have to pray that they manage to survive the next thirty seconds, as you have no control over their actions, and they definitely won’t try to run away.

Skill use is an equally problematic aspect of combat. While casting a spell, your character is immobile until it’s finished, since the movement controls are used to cycle through the spell menu. In addition to an MP cost, all spells also have a cooldown, the length of which varies based on the spell. This cooldown is global, so casting a spell with a lengthy cooldown will prevent you from casting any spell for the duration. To the game’s credit, there are a wide variety of spells, but unfortunately, the command system doesn’t support it very well. Buff spells have a short cool-down and can generally be used in fairly rapid succession, but offensive and healing skills all have lengthy ones, which makes their use limited.

Blue Dragon doesn’t do everything wrong, though. The shadow system is quite well designed, for example. The main character has six different shadows to work with, which essentially count as six party members. Each shadow levels up and learns new abilities separately, and the main character and his various allies can equip any of these shadows, at which point experience points gained will be applied to it. The equipped shadow has two effects. First, it affects the character’s overall stats. Each shadow has a focus, and the stat bonuses they grant are based on that focus. Second, it affects which skills a character has access to. This is where things get a bit more interesting. While ally characters generally only have access to the skills inherent to their equipped shadow, the main character is capable of using every skill each of his shadows knows, regardless of which one he has equipped. This allows for a bit of customization, as you can select which spells to include in your spell menu. However, despite this, it quickly becomes apparent that it’s not all it’s cracked up to be. Because each shadow must be leveled up separately, it’s generally a better idea to select three shadows that work well together and focus almost exclusively on them, since trying to spread the experience gain out will likely result in a lot of unwanted grinding.

The one thing that Blue Dragon: Awakened Shadow does really well, in fact better than most games of its ilk, is how it handles loot. In the vein of Diablo, Awakened Shadow sees a lot of items and equipment drop, and these can all be used in the game’s combine system. While most similar games generally involve a lot of junk loot that’s simply sold off to vendors, Blue Dragon has found a better use. The combine system allows extra, unwanted equipment to be used to strengthen the ones you are using by enhancing its attack or defense, the only restriction being that items can only be combined with similar items: swords with swords, armor with armor, etc. When you find a new, more powerful weapon, your old weapon can be combined into it to boost its power. 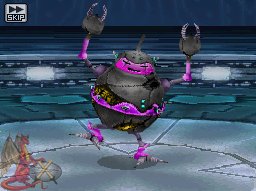 At least the game has plenty of imaginative enemies to fight.

The combine system does even more, though. For every piece of equipment in the game, its strength is based on its rank, D being the lowest and S being the highest. However, an item’s rank is not set in stone. Items can be found that allow you to upgrade equipment to the next rank, and in this way, literally every piece of equipment in the game can potentially be as powerful as every other. Since equipment is entirely visible on your character, you’re no longer forced to abandon a cool looking sword or piece of armor because it’s no longer viable. You can just upgrade it instead. The combine system also has dozens of recipes available to create special items, similar to alchemy systems in other games, but it’s the upgrade capabilities that really stand out as impressive. Of all the things that Blue Dragon does wrong, this is the one thing it really does right.

Awakened Shadow‘s visuals are also quite solid. The 3D is quite impressive for the DS, and the character customizer allows you to generate your own Toriyama-styled character. While the feature choices are fairly limited, new hairstyles are unlocked over the course of the game, which can be applied at the barber in town. Of course, hair is fairly irrelevant since most of the time it’ll be covered up by a hat. The environments are colorful, but not nearly as attractive as the character and enemy models, which are quite detailed.

The audio doesn’t share the quality of the visuals, unfortunately. The soundtrack is almost entirely rehashed from the original’s, but with a much lower sound quality. RPG fans will probably feel a sense of nostalgia when listening to the in-game music, as the electronic instrumentation used in the game are identical to the ones used by composer Nobuo Uematsu in Final Fantasy VII. This low-quality format might have been acceptable in 1997, but it doesn’t fly today, especially so late in the DS’s life-cycle when we’ve already seen countless examples of better sound quality. The game also features a bit of voicework, but the acting is poor and the sound quality is equally bad.

There are a huge number of other issues plaguing the game: sparse save points, a quest-based structure with hardly any quests, and a difficulty curve heavily dependent on level are just a few. But the most obnoxious thing about Blue Dragon: Awakened Shadow, beyond the clunky mechanics, beyond the poor localization, is how blatantly it attempts to mimic Dragon Quest IX, and how poorly it does it. Blue Dragon: Awakened Shadow also features online play through the DS’s wifi, but I cannot comment on it as I did not attempt to make use of it. It’s possible that online play can make the game slightly more enjoyable, especially since you won’t have to rely on the terrible AI-controlled characters. However, as a single-player experience, Blue Dragon: Awakened Shadow is a terrible game.