We all know that the greatest “battle princess” to ever grace mass media was Xena: Warrior Princess. From her stunning good looks to her chakram throwing ways, she solidified what it took to be the most badass princess of the 90s. While Princess Plume of Battle Princess of Arcadias is not a chakram toting, thighs-like-a-vice battle maiden, she makes for a surprising addition to kick-butt battle maidens in media. Oh, and did I mention the game she stars in is also fun, but kinda flawed?

While Battle Princess of Arcadias isn’t on par with Xena: Warrior Princess, it’s definitely a game that puts female characters in the forefront for interesting storytelling. Plume is a Battle Princess from the kingdom of Schwert, an area being attacked by a towering beast. Having lost her soldiers in battle, along with her beloved assistant, Plume returns home to rethink the situation, only to be given a second chance to prove that she is worthy of her title.

If only this was the actual focus of the story. Beat ’em ups are not known to be story driven and Battle Princess tends to keep a fairly light tone even in its serious moments. The cast of characters are quite fun, but they also fall into clichéd trappings. Plume is the lovable ditz, Raltz is cute but can’t make a decision, and Odette is sweet natured, but wild on the battle field. While these stereotypes are not harmful, they do get tiresome quickly when the story is attempting to tell itself. Despite some facepalming moments, a lot of the humor is charming and not entirely without merit.

Despite the lapsing story, Battle Princess of Arcadias‘ largest draw comes from its varied take on the beat ’em up. There are three styles of gameplay, though similarities are shared between them. Combat sections are 2-D side-scrolling missions that are simply focused on bashing the enemies from side to side until they have all been defeated. These are the most common mission type, requiring players to bring three characters along for the purpose of building their levels, which are tied into the second form of battles: skirmishes. 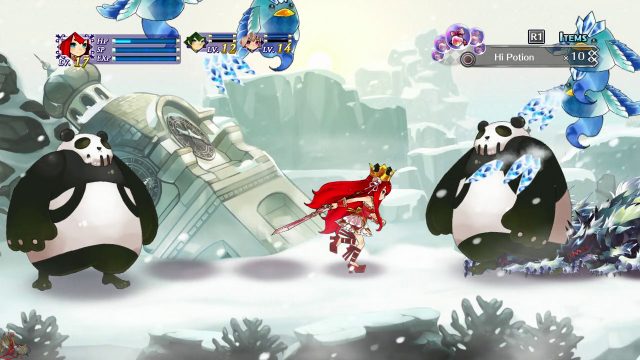 Skirmishes are battles wherein your three playable characters participate in battle alongside a brigade that the player controls. The levels you gain in combat are tied to the level of the brigade, which is why grinding is essential in Battle Princess. There are six classes: gunners, archers, great sword users, fencers, mercenaries (or axe users), mages, and spear wielders. Each class has stats that show their strength, defense, and special ability, alongthe player a with their strengths and weaknesses against the other classes. When pre-planning for a skirmish, it’s important to note one’s level versus the enemy, as well as positioning, because it’s not that simple to swap in mid-battle without morale.

In a skirmish there are two rows. The back row features the brigade currently in battle, while the front row is occupied by the player character fighting solo against a flood of enemies. By killing the leader in each flood, the player gains morale. When the morale meter is full, characters can unleash a special move that will usually (but not always) tip the battle in the player’s favour. Players also need morale if they want to switch a brigade, and can lose morale when a brigade has been defeated. These skirmish battles, at first, cannot be won with brute force, as a surprising amount of planning has to be done prior to the battle. However, it’s very easy to make a brigade super-powered, throwing the skirmishes off balance and easily in the player’s favour. For example, if Plume’s level is 30, her Fencers are at the same level. If the enemy brigades are level 15, these Fencers can go in and crush any enemy regardless of whether it is strong/weak against it. The whole point of these battles is to swap the brigades out when a class is weak to something to ensure that it can be defeated, but in this situation, Plume’s Fencers would completely dominate the battle so that no morale is lost and no brigades require switching. This proves for quite the unbalanced challenge, because grinding can really make any battle in this game a cakewalk.

The last style of combat is a siege, which is a fancy term for a boss fight. Sieges are the least occurring style of battle, and it’s a shame because they can be quite enjoyable. Using the brigade, players will beat down a shield on a boss until it hits zero. Once the shield has been depleted, the player and her brigade can attack to drain as much HP off the boss within the small amount of time it takes for the enemy to recharge their shield. Much like the skirmishes, however, sieges can also become pitifully easy through grinding. 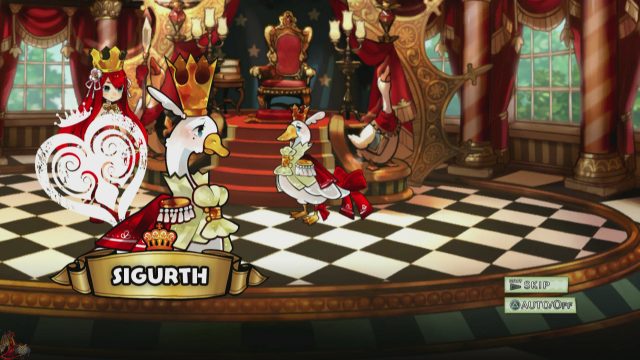 King Sigurth, everyone. Why yes, he is a goose. No, he and Plume are not related.

While the game has three great concepts for a beat’em up, it lacks a sense of balance because grinding can easily tip the scales in the player’s favour without much effort. By design the game wants players to use all the classes, but it’s really just as easy to stick to one or two characters, overpower them, and steamroll through each level. It also doesn’t help that there’s no balance between the number of combat sections, skirmishes, and sieges. The final few hours of the game are all combat sections and one skirmish. This lack of variety towards the end of the game makes for a dull march of repetition, and it grows old quickly. While repeating levels has the benefit of earning the player new weapons, materials, items and experience, even with the game’s fast-paced gameplay, it’s not always fun to repeat content. Upgrading weapons is serviceable as long as players have the materials they need, and weapons can be enhanced with raw materials to boost stats. There’s a nice simplicity to this system, even if having to harvest for said materials gets grating.

While some ideas in Battle Princess don’t work as well as expected, the game’s aesthetic design is not one of those failings, as the game is quite eye-catching. It sports a fairy tale-esque look that is both vibrant and crafty, almost like a puppet play. The only issue with this puppet theatre look is that it would have benefited from being extended into the entire game’s design. There’s also a lot of palette swapping in regards to enemies, but this is a minor gripe. Still, the graphics are fantastic, even with these small criticisms aside. The soundtrack is mostly made of catchy J-Pop songs that are supposed to get players pumped up for battle, and for the most part it works quite well, though it’s definitely not for everyone.

Battle Princess of Arcadias is a perfect example of what it means to be a middle-of-the-road RPG. It doesn’t do enough to be memorable, but offers enough enjoyment to at least be entertaining. I wish in some cases that Battle Princess of Arcadias had taken some pages from Xena: Warrior Princess. Yes, Xena was cheesy and insane, but it knew exactly what it was doing a lot of the time. Battle Princess has charm, cheese, and a few good ideas, but it’s mired by mediocre execution. The game is still fun to play, even with the repetitive nature and lack of balance, but it’s a shame that the added RPG elements hinder the experience more than help it succeed.