Avalon Code is a game about a silent, green-garbed boy who runs around a fantasy world accompanied by a wise-cracking spirit, solving puzzles, fighting monsters, and getting into all sorts of awkward and yet undeniably charming romances. Oh, and he’s also the harbinger of the end of the world. Nice twist, huh? A combined effort from Matrix Software, the people behind Final Fantasy III and IV DS, and some of the folks who’ve worked on the Harvest Moon and Rune Factory series, Avalon Code is a charming, if somewhat flawed, adventure RPG that is remarkably similar to Nintendo’s Legend of Zelda series in many respects.

My initial sentence may be a bit misleading. While it’s easy to draw correlations to Nintendo’s trademark adventure franchise from both the game’s appearance and basic gameplay, Avalon Code is an incredibly original title. The game stars either Yumil or Tia, depending on the player’s choice of gender (though for the sake of simplicity, this review will henceforth assume Yumil as the protagonist), a boy living in a city called Rhoan, part of the country of Kaleila. One day, the Book of Prophecy appears before him, along with the fire spirit Rempo, who informs him that the world is nearing its end, and that he has been chosen to decide what shall exist in the new one. To do this, Yumil must explore the current world, acquire the help of the other three elemental spirits, and collect data in the book to carry over.

There really isn’t much else to say about the game’s plot. While it’s certainly an original premise, it is equally simplistic in its execution. The game never tries to become anything more than a charming fantasy, with all the clichés and stereotypes that go with it. There’s absolutely nothing wrong with the story, particularly since it’s told well and provides a solid backdrop for the game’s activities, but players shouldn’t expect anything more than that.

The real draw of the game is the unique way in which the Book of Prophecy is melded with the gameplay. The Book of Prophecy serves as the player’s menu throughout the game, collecting data on pretty much everything that is encountered. When the player smacks a character or enemy with the book, its data is recorded. When a new area is entered, a map is created. All of these things add to the book’s value, and once it reaches a certain threshold, it levels up, an act which is accompanied by a vision of the future, explaining where to find a new sidequest.

Collecting data is the primary purpose of the game, and there is a ridiculous amount of data to find. In addition to being able to collect it for every character, monster, and item in the game, all maps either have a puzzle to solve, which provides a score based on time and various other factors, or several hidden points with more detailed information, increasing the page’s value. As if that weren’t enough, oftentimes finding all the hidden spots or scoring high enough on a puzzle will reveal a tablet that provides details on how to create a new item or weapon. 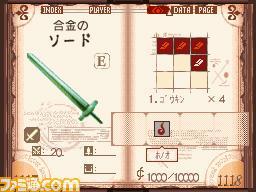 In addition to being able to collect data from throughout the world, Yumil also has the ability to manipulate it, changing the attributes of pretty much anything he encounters. He does this by manipulating the code fragments that exist on a particular item, enemy, or character’s page. Code fragments come in many different types and many different shapes, and by removing and adding them, different effects are applied. If code fragments are added in the right quantities, the specifics of which can be learned from the many, many tablets throughout the game, a basic item like a sword or hat will transform into something more powerful, and usually with a unique appearance as well.

There are dozens of tablets to discover throughout the world as well as many, many sidequests, learned not only from the Book of Prophecy, but also by talking to the various characters in the game. In addition, by actively speaking to and giving gifts to a particular character, the player can form a relationship with him or her, unlocking additional sidequests and also changing which characters are involved in certain events during the game. With so much to do and find, it is unlikely that anyone will discover it all in a single playthrough, giving the game an impressive amount of replay potential.

Unfortunately, the great concept is hampered a fair deal by certain design flaws in its core mechanics, but mostly by the cumbersome way the Book of Prophecy menu system is handled. To be fair, what exists in the game works perfectly and would be fine were it not for the extraordinary number of pages that the player will likely have to flip through by the end of the game. What the menu lacks is a search utility, and this is a game that really, really needed one. By the end of the game, there are easily over a hundred pages of monster, character, and item data to sift through. While the player can use the index page to quickly jump to a particular category, a welcome feature that does help save some time, there is no way to search for a specific type or shape of code fragment, which means regularly flipping through the book searching for one in order to create new items. In addition, the player can only hold four loose code fragments at a time, which means that for some of the more complicated recipes later on in the game, flipping back and forth from one area of the book to another becomes necessary and rather tedious.

Other strange design choices come into play as well. For example, every time a code sample is added or removed from a page, it costs one MP. If the player runs out, it’s surprisingly difficult to restore. Sleeping at Yumil’s house will only restore half his HP and fifty MP, and the only other way to restore it is to kill enemies with a particular move or find and break a restoration jar, which generally only appear right before boss fights. Fortunately, this issue is little more than a pointless inconvenience for the most part. Death does not result in a game over, and the player can choose to continue from the last room he entered. The puzzles or battles there reset, which prevents the game from being excessively easy, but continuing has the added benefit of allowing the player to restart with fifty MP. If out of mana and not wishing to run back through a dungeon in search of an enemy or restoration jar, jumping off a cliff until dead serves as a handy, if somewhat ridiculous, cheat. Despite these issues, it rarely affects gameplay to the point where it becomes overly bothersome. The game’s many puzzles, terrific boss battles, and huge variety of things to discover can easily keep one thoroughly entertained in spite of its interface problems. 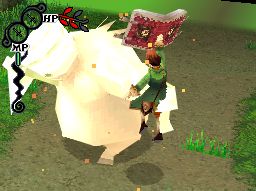 More fun than you can smack a book at!

Avalon Code‘s combat is very simple and reminiscent of old, 2-D Zelda games. Yumil can equip two weapons at a time, drawn from five basic types: Swords, hammers, bombs, projectiles, or good old fisticuffs. The Y and X buttons allow one to attack with whichever weapon is in the corresponding hand, and holding down the button will charge a special attack unique to each weapon. The player can also gather data on enemies by getting behind them and hitting them with the book. Finally, the player can initiate a Judgement Link attack with the A button, which tosses the enemy into the air and begins a surprisingly fun mini-game in which the enemy is juggled and kept afloat for as long as possible. Attacking an enemy consecutively with the same weapon will toss it higher and higher, while switching weapons will bring it back down to a low height. As it flies higher, the game rewards the player with an amusing vignette of the enemy flying into the sky, off the map, into orbit, and even out of the galaxy. When defeated this way, enemies provide MP restoration. MP is not only used to manipulate the book, but also to unleash elemental spirit attacks and to use the data of items the player has found, restoring health.

The simplistic and fast combat keeps the game flowing well, and the various types of weapons all handle rather differently, which allows the player to develop his own preferred playstyle. Boss fights, however, generally require some fairly specific strategies in order to defeat, so players shouldn’t expect to be able to use their favorites throughout the entire game. The player will also be rewarded for sticking to a particular group of weapons, as continued use will cause them to level up, providing various bonuses such as improved attack power or improved special attacks.

On a visual level, Matrix once again proves they’re the masters of the DS hardware. The character models are fantastically detailed, and although they tend to get a bit pixellated when shown close up, the detail and expressiveness of the designs aren’t lost. Unfortunately, there is a fair bit of repetition in the level designs, with several rooms in each dungeon having identical layouts. This gets irritating quickly and can also make navigation a bit confusing. The audio is also quite good, with a catchy score that’s easy to listen to and a fairly large amount of decent, anime-styled voice acting. To be fair, these aren’t Oscar-worthy performances, but the lines are all delivered with gusto, enhancing the game’s already eccentric characters.

Avalon Code is a quirky, highly original action adventure that will probably appeal most to fans of the Legend of Zelda series or Harvest Moon‘s relationship systems. The glaring interface issues detract from the experience somewhat, but for the most part aren’t much more than a minor irritation and can be alleviated with a bit of storage management on the part of the player. There are also a handful of localization errors that make a small number of the recipes unusable, though with experimentation players might be able to track down the correct code combinations. The terrific exploration and experimentation-driven gameplay manages to hold up in spite of these things. The game itself is also fairly lengthy for a handheld title, clocking it at roughly thirty hours with plenty of replay potential. In addition, after the closing credits, the player can continue playing and explore the world of his own volition. Avalon Code is certainly not the greatest RPG available for the DS, but at the same time it is far more than a simple Zelda clone.