What Is the Price of Peace?

Avadon: The Black Fortress is the latest title from venerable indie developer Spiderweb Software. Rooted squarely in classic PC RPG gameplay, Avadon manages to stick to its roots while still feeling like a very modern RPG, blessed with many of the features that BioWare games brought to RPGs over the years. Despite a lackluster visual presentation and minimal sound and music, Avadon manages to tell a compelling fantasy tale full of intrigue and betrayal that players won’t soon forget.

Avadon takes place in a fantasy world where a pact of nations is constantly at risk from outside threats. To keep the peace, the titular fortress of Avadon plays host to an elite group of warriors who protect the peace of the pact at all costs. Run by the merciless, and apparently ageless Red Beard, Avadon is certainly a force to be reckoned with. While this could have made for a rather generic story,  the plot picks up rather quickly and provides plenty of intrigue to keep players going. This is due to the fact that players will notice that everything is not quite right with the pact. The missions the supposed heroes are sent out on don’t always feel particularly heroic, and it’s clear that placing the pact above all else, often leaves the common man in the dust. As one completes varying seemingly unrelated quests, a larger plot begins to show itself, with several surprising twists before the end. Not everything is answered, as the game clearly sets up potential sequels, but the ending is still quite satisfying.

Of course, a great story is nothing without good characters, and Avadon certainly provides them. Classic style RPGs of this type generally task the player with creating a party from scratch, giving players a great deal of creativity, but preventing the game from providing interesting characters to bring along. In this game however,  players only create one character, and there are four other characters, one for each of the game’s classes. They can be brought along two at a time for a max party size of three. The characters come from various regions, and provide a great way to dynamically teach the player about the game’s world in a way that doesn’t feel forced. They provide interesting commentary while on quests, and players are even free to chat with them while resting in the fortress of Avadon between objectives. These characters will also wander off during certain parts of the story, and lengthy side-quests are required to get each character back. While breaking the flow of the main adventure a bit, these quests provide a nice to introduce more back story to the party members. They also further help to develop the various cultures of Avadon‘s game world. 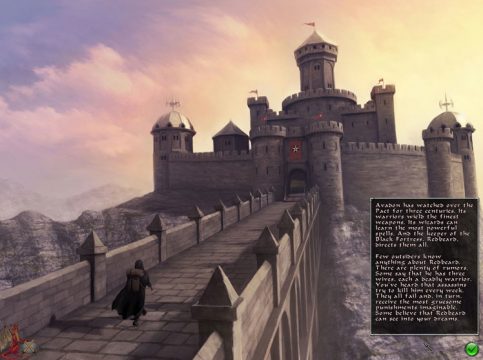 Avadon is not a friendly place.

Avadon would be quite good based on these aforementioned story qualities, but where it truly shines is with its classic turn-based battle system. Outside of combat, exploration happens in real time. It uses a simple point-and-click interface that is easy to navigate. Given the simple look of the game, exploration is quick and easy. As soon as the player is spotted by monsters, or when a specified key is pressed to enter combat mode, everything switches to turn-based. Unless buffed, each character can generally only move and use one attack or ability per turn. The game’s simple combat setup is made interesting by the variety of scenarios the game throws the player’s way. The player will often be outnumbered, surrounded, or in the case of many of the game’s fantastic boss encounters, forced to deal with all kinds of extra factors beyond just enemies. Thankfully, the game’s four classes provide a vast array of tools to deal with the various challenges the game will throw the player’s way.

The four classes Avadon provides are blademaster, sorceress, shaman, and shadow walker. The blademaster provides the usual warrior abilities of drawing enemy attacks in addition to powerful strikes, including some attacks that damage all those around him. The sorceress naturally has many powerful spells for attacking large groups of enemies. The shaman is a jack of all trades, providing everything from healing to monster summoning. Finally, the shadow walker fills the function one would expect from a rogue, with many skills based on maneuverability and enemy distraction. Freedom is somewhat restricted in developing these characters, as certain skills are required in order to acquire the more advanced skills. Still, the player is allowed a certain amount of freedom in what types of skills to specialize in, while the restrictions in place help prevent unbalanced character builds. This is quite important, as the difficulty of the game quickly picks up, and unbalanced characters would certainly make the game unreasonably difficult. The only issue with the difficulty is it seems to expect players to do at least some of the side-quests in the game. It’s a minor issue, as the side-quests are often interesting and add depth to the story. However, those trying to just play through the main storyline exclusively will find that things get quite difficult quickly unless, at the very least, the character side-quests are completed. 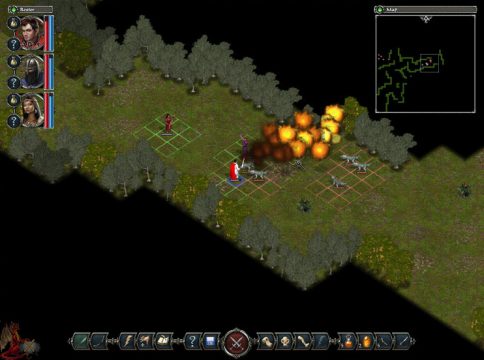 Naturally, one look at the screenshots for Avadon will show players that it doesn’t push the boundaries of graphical presentation by any means. Player characters and monsters don’t have much animation to them, and locations don’t provide a great amount of detail. Despite this, the graphics get the job done, by presenting to the player all the information they need. Monster types are very distinct, distances easy to observe, and chests and items easy to spot on the map. It all feels like a computerized representation of a table-top RPG. This is further reinforced by constant text descriptions the game provides to detail the finer points of a location and the situation in that area. It all feels like some unseen dungeon master is presenting this adventure to the player, and it goes great lengths to making up for the lack of sophisticated graphics. Where things don’t fare so well are the sound and music. Beyond a rousing main menu theme, the game is completely devoid of music, instead opting for background environmental sounds which leave a lot to be desired. The sounds in combat are mostly adequate, but when a spider attacking uses the same sound as that of a wolf, it serves to take away from the tense and immersive feel of combat.

In the end, the presentation issues don’t prevent the great combat and story from shining through. Avadon is a great example of how a classic RPG formula can still feel quite fresh in the modern era. With a massive quest that can take forty hours or more depending on the number of side-quests undertaken, Avadon uses its lower graphic fidelity to its advantage to provide a fast-paced and lengthy adventure. With multiple endings and lots of surprises in its intriguing storyline, it’s sure to be an experience many gamers will remember for a long time.