Atelier Sophie: The Alchemist of the Mysterious Book PC Review

A Bookful of Dreams

The Atelier series has seen many variations over the last two decades. Generally, the start of a new trilogy or platform also brings about new innovations and alterations to the standard formula, which can be a good thing. It can also mean all sorts of oddities, errors, and poorly considered design concepts. Atelier Sophie: The Alchemist of the Mysterious Book thus proves itself to be a true successor to the name in every way.

Like any Atelier game, Sophie poses the titular heroine with a situation and a goal, though Gust has apparently abandoned the concept of time limits, even for most side quests. Sophie is a girl trying to follow in the steps of her late grandmother, a lady who loved both books and alchemy in equal measure. One day, while trying to sort out some basic recipes, Sophie comes across a strange tome that comes alive when she writes notes in it. Plachta, the spirit residing in the book, doesn’t have many memories left to her, but one of them is a biggie: the existence of the Cauldron of Knowledge, an alchemic tool so advanced that it would let anyone become a master simply by possessing it. Sophie dedicates herself to filling out Plachta’s empty pages and realizing her dreams of helping the citizens of her town of Kirchen Bell through her newfound ability to make darn near anything imaginable.

If there is a central theme to this game’s plot, it’s definitely dreams, as every major figure in it has something they’re striving towards or running from. Sophie does a good job of presenting the main cast as an understandable band of weirdos, but there are times when the pacing of events feels off, when things run together too quickly, or when long stretches of nothing dominate, despite a fair number of non-playable characters having major roles. Series regular Pamela Ibis makes an appearance, but more surprising is to have Logy from the Dusk series included as a native of Kirchen Bell. Considering that his core persona seems quite different, it would have made more sense to just create a new character.

Strangely enough, the presence of a villain in this game ultimately weakens it, at least in the way he is brought into the story. Without giving away too much of the plot, there are two characters who are also after the Cauldron of Knowledge so that they can revive the villain, an overly ambitious alchemist from a past age. The thing is, these two characters only show up at important alchemic events, apparently out of the blue, and are so blatantly suspicious that the inevitable betrayal and revelation is a letdown. At the same time, the villain is paradoxically suffering from too much and not enough personality and importance. His presence steals the focus of the game away from “hopes and dreams” and steers it straight into “save the world” territory, but he has barely any screentime to establish himself. All of his background characterization comes courtesy of Plachta’s memories, and even in defeat he proves to be anti-climactic. 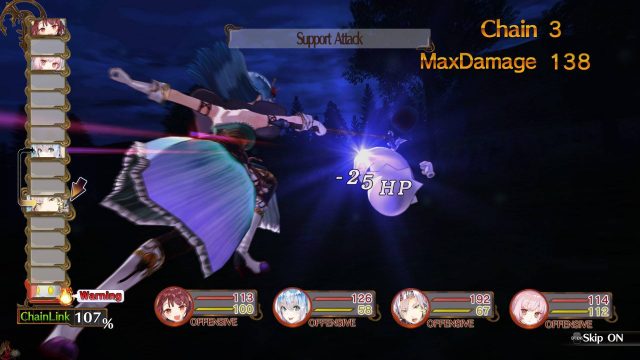 How does Leon fight in that outfit, anyway?

Added to that, the final story battles represent a disproportionate challenge when compared to everything that lead up to them, with enough of a jump in difficulty as to justify an Unbalanced challenge rating for the game. The fights in Sophie can be unpredictable and dangerous at the higher levels. For seemingly arbitrary reasons, the game hits a level cap at twenty, and then continues with an ability point system thereafter. While it’s somewhat flexible in how the player can choose to develop the characters past that point, its presence feels tacked on and its usefulness is questionable when compared to continuing the original leveling scheme.

The battle system has, if anything, devolved a bit from its antecedents in the Dusk trilogy, with some combat options simplified and others eliminated entirely. There is a bigger emphasis on combat items, even for non-alchemists, and thankfully there’s also a means of recharging item uses upon return to the atelier. However, there also appears to be an expectation on the part of the developers that the player will naturally focus on min-maxing the equipment lists as soon as humanly possible, leading them to ramp up the difficulty and making the final boss more comparable to the optional super-bosses from previous games. If you didn’t fare well against the Demon of the Tower in Atelier Totori, expect just as brutal a beatdown here.

The best arms and armor require the player to jump through the narrative hoops necessary to unlock them. Just to acquire all the ingredients to make the best materials, one has to pay for rumors at the cafe that will make them available (but not necessarily easy to get) for a limited time. After that, it’s still likely that Sophie won’t have enough to make stuff for everyone, so she’ll have to use the item-duplication option, which takes time and a lot more money. Then she has to pay a decent sum to make the weapons or armor, and once that’s all done, any enhancements on those bits of equipment will cost at least as much as the original production. This is not at all balanced with the game’s rate of income for Sophie, and necessitates a lot of extra grinding. Thankfully, it’s possible to beat the game without the best equipment, though it’s a struggle.

It is on the item synthesis side that Sophie makes its primary advance of the series formula. Instead of simply throwing stuff in the pot and seeing what comes out, each ingredient comes with a tetrisoidal block type (with occasional variation based on item traits or quality) to be fit within a grid pattern during synthesis. Smart placement lends more energy to the final product, unlocking new traits and powers in the process. There are multiple upgradeable cauldrons available over the course of the game which provide different grid sizes and bonus types, making this perhaps the most in-depth version of the system to-date. It’s certainly more interesting to tool around with.

Another innovation is how Sophie gains insight for new recipes based on her experiences in Kirchen Bell as well as in the field. As she progresses in filling out Plachta’s pages, she will receive clues to help her further her investigations into the mysteries of alchemy. Some of these clues are easily solved, while others may need some forward planning to meet the requirements. At least one, the recipe for the Monochrome Goggles, is hopelessly buggy in every known version of the game, including this one, and is very difficult to trigger properly even when one knows which skill to use. 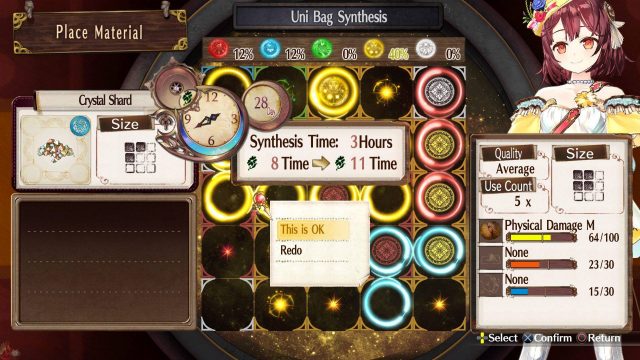 The graphics hold to the standard of the PS3 branches of the series, but with some caveats. First, for the record, this review is based on the PC version of the game, played via Steam, which has some unique issues. At least one of these — errors and choppiness during the intro movie — can be blamed on my laptop only meeting the lower end of the hardware requirements. However, there was a frequent problem with certain character model parts (i.e. eyes, hair, and head accessories) randomly disappearing and then sticking to other people’s faces. Otherwise, the notable slowdown that happens when the field is crowded actually works in the game’s favor, as it compensates for difficulties with the keyboard controls when trying to play whack-a-monster for the presumed speed bonus at the start of combat.

For the positives, Sophie does a good job of showing a wide array of body types for its main cast, and the scenery is nicely done. Some of the costuming choices may be seen as questionable — in particular Leon the tailor’s boob-window and bustled mini-skirt ensemble — and another character’s starting ensemble comes across as borderline creepy, considering it was designed in-game by a middle-aged man to look like full-body lingerie. Sophie has several costuming options, thankfully, so the player can at least play around and figure out what suits their own tastes.

Coming in at the end of a long succession of PS3 Atelier titles, Sophie should have had a better soundtrack than it did. The majority of tracks are serviceable, and as usual the entire preceding series discography can be picked through for old favorites, but there’s a paucity of new stand-out tunes. The most interesting of them is “Liela Xea,” the final boss theme, but that’s about it. The game’s auditory experience is far from bad, but it does feel like a step back at times. 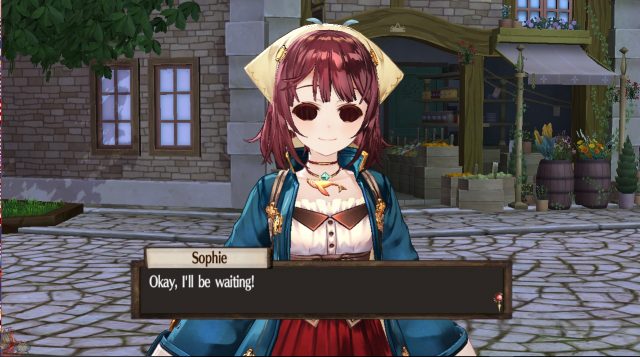 Why did I have to look her in the eyes…

The voice-acting is a bit more hit-or-miss. Sophie herself gets the best treatment, but the main supporting cast shows different issues with stilted lines, odd pronunciations, and voice tones that don’t really work in context. Pamela Ibis’s voice-over in particular warbles so much that she sometimes sounds like a talking turkey.

The game’s script is not helped by some problematic translation and localization choices. Many lines appear to have been done too literally or without consideration for context, making for some memorable if strange combat quotes. The item list is stacked with oddities, where the series’ native mish-mash of Japanese and pseudo-German nomenclature was translated (or transcribed) to the least-effort results. As one example, the localizers apparently did not realize that “Aizen Ore” was actually eisen, the German word for iron. On the Japanese side, “Raiden,” “Kaen,” and “Hakurei” (the three elemental ores) literally translate as lightning, flame, and white ghost (i.e. freezing mist), and these names are left intact even when alternatives could easily have been imagined. The biggest error by far, however, is to be found in the game’s time-keeping device, which apparently does not know the word “o’clock.” Instead, when stating the projected time for an item’s completion, it will say something like “21 Time” (9 o’clock in the evening).

In the final analysis, I would say that Sophie resembles the PS2 branch of the series — specifically Lilie, Judie, and Violet — more than its immediate predecessors when it comes to both style and scope. While it certainly builds upon the heritage of those games, and even borrows Judie‘s time-keeping and endless calendar setup, it also tries to force in the stronger plot and combat elements of the later games with very mixed results. Though this is best exemplified by its final boss, the entire game suffers through issues of “too much or not enough” in regards to just about everything. Sophie is not the worst game of the series by a long shot, but it’s still the weakest showing to be brought overseas in a long time. For those gamers coming off the high points of the Dusk series, disappointment is largely inevitable.