Mana are beginning to vanish from the world and the alchemists along with them. Klein, one of the few remaining alchemists, leaves on a journey along with a wood mana named Popo in order to surpass his grandmother in the art of alchemy. Of course, he and his companions will end up on a much larger adventure than they had planned. Atelier Iris: Eternal Mana is the sixth in the series, but it is the first to reach North American shores. It has an oldschool look and charm, but the alchemy, item creation, and battle systems are well refined.

What separates the Atelier series from others are the alchemy and item creation systems. It’s possible to extract mana energy from many things including bushes, rocks, and barrels. It’s also possible to gather energy from items in the party’s inventory and even enemies. There are about a dozen elements and some are far more common than others, but they have many uses. The most important use is to create mana items, powerful items that Klein can make and use in combat. Since many have overlapping elemental components, the player must choose carefully to avoid running out, especially for rare elements. It is also possible to use mana to alter certain weapons and armor in order to create customizable equipment once the ability to forge has been attained. 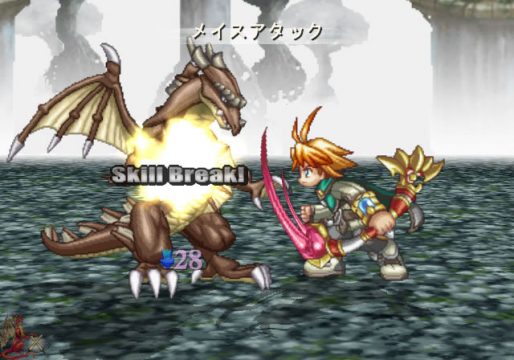 Stop enemies in their tracks before they finish charging their skills

In addition to items Klein himself can make, the party also has the ability to befriend various shopkeepers, influence the success of their respective shops, and have them create special items for the party. This is done by collecting ingredients for special recipes. It is often possible to substitute ingredients to create different items or alter their quality. Many rare and powerful items can be made this way.

If all that wasn’t enough, there are also other systems and tasks such as item collecting and Growloon hunting. The best part about these systems is that they, for the most part, do not require countless battles to gather the items needed. In fact, aside from Growloon hunting, these systems are fairly self-sustaining. For example, having shopkeepers create new items will slowly fill the item list. These new items can be shown to the item collector for money and other rewards. This money can then be used to purchase new component parts for the shopkeeper to synthesize into even more items. It’s generally possible to play with these systems for a long time without a single battle should the player wish to do so. of course, all these systems can create quite an arsenal for the heroes once the fighting begins.

Combat has a traditional RPG basis, but it also has several tactical components such as area effect. In addition to the numerous items that can be synthesized, each character has many skills that can be leveled up as the player sees fit. As with distributing elements among mana items, skill points are limited and careful choices must be made in order to create an effective party. In battle, special moves that require charge time can be used by both enemies and allies, but these can be canceled with a few well-placed hits. While it’s not possible to freely move about the battlefield, it is possible to use certain abilities to push enemies around in order to achieve maximum splash damage. Despite the numerous systems and tactical elements, battles are surprisingly fast paced, fun, and exciting because item creation and most other things are dealt with outside of combat. 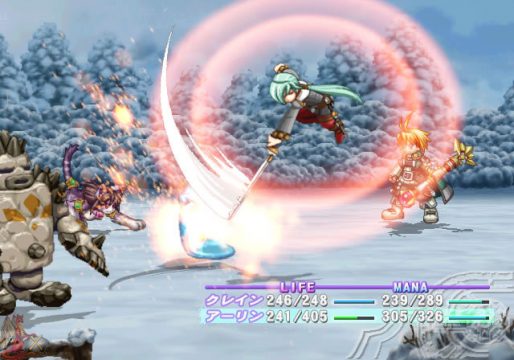 Don’t mess with him

Another good thing about battles is that the encounter rate is low, and the difficulty and rewards are a bit higher to compensate. As a result, players are not needlessly bogged down by tedious fights and are often forced to think. While random encounters don’t pose a major threat, they can still eat through resources fairly quickly if the player isn’t careful. Bosses, on the other hand, are harder and generally shouldn’t be underestimated. As long as the party heals regularly and has a good stock of the more powerful mana items, bosses shouldn’t be too much of a threat though. While these items have great power, they are generally too rare to be used outside of boss fights and thus do not cause the difficulty to become very unbalanced.

The only thing that can really slow down battles is the interface, which is a bit lacking in comparison to the other refined systems. The battle interface is still pretty good, but the slowly revolving command circle can slow things down a tiny bit. While this isn’t too bad, the main menu outside of battle is worse as it contains a few somewhat hidden options and some features that seem a tad redundant.

Atelier Iris‘s central storyline is also a bit lacking. While it certainly isn’t bad, it’s fairly generic for the most part. Luckily, the characters are interesting and fairly developed; even lesser characters receive a few moments in the sun. Almost as if to make up for the main story, there are several sidestories that unfold. These primarily revolve around the shopkeepers with large item synthesis menus and are pretty good for bonus stories. 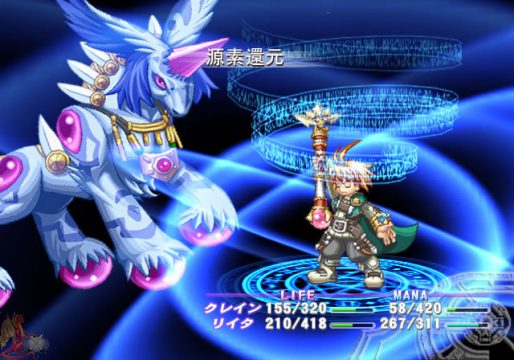 The central story itself may be generic, but the assorted item creation and battle systems are fairly original, though some were in previous Atelier titles. There are many bizarre and original items that can be found or created though. Either way, while it may not be incredibly original in Japan, much of this is very new to those in North America that haven’t imported other games in the series.

It will probably only take about thirty hours to complete the main storyline and dungeons for those who do not spend very much time doing sidequests or creating rare items. There are, however, hundreds of items to be found or collected, should one wish to. As new exploration abilities are gained, new areas can be explored and rarer items can be crafted. The sidestories of various characters will also unfold as sidequests are completed and shops prosper. These can easily tack on another twenty hours.

Atelier Iris is only of moderate length, but some of the music can still get old after a while. To help make up for this, certain tracks, such as the battle theme, are replaced as the game progresses. While the quality of music varies widely, this is also helped by the fact that several common tracks are good. Unfortunately, a few can still become annoying, especially if a lot of time is spent in shops.

The visuals, like the music, also vary widely in quality. Most of the sprites that are used out of battle aren’t very impressive, and neither is the world map. Almost on the opposite side of the spectrum, the character portraits that appear during important conversations are large and detailed. Even more impressive are the battle sprites which are smoothly animated and also quite detailed. This gives battles an oldschool look without sacrificing quality of visuals. Even most enemies that have multiple recolored versions have had minor adjustments made to keep them from all looking the same. It’s a shame this level of effort wasn’t applied to the rest of the game’s visuals.

Atelier Iris features fun gameplay, a great battle system, and good oldschool graphics. While they may take some getting used to, the numerous item creation systems are a lot of fun to play with too. It has a weak central story, but this is partially counterbalanced by many sidestory tangents. When all is said and done, Atelier Iris: Eternal Mana is a lot of fun to play and a great game.