For centuries, humans have expressed themselves through music. Soulful tunes reach out and envelop the listeners in a variety of emotions: joy, hope, fear, and sadness. In Ar tonelico: Melody of Elemia, songs are powerful enough to change the world. The game begins by drawing a deep breath in preparation to sing a magnificent song, but the melody falters and struggles to stay on key.

The world of Ar tonelico consists of floating pieces of land and architectural structures clinging to a tower, with the heavens above and a ruined world below. The tower is the source of life and stability, but it also houses malice and heartbreak, as demonstrated when viruses suddenly pour out and threaten the tower’s harmony. Lyner Barsett, a standard-issue optimistic but clueless spiky-haired hero, steps out of his comfort zone in the tower to retrieve an item that will restore the balance. During his journey, he becomes intimately connected to two Reyvateils, Misha and Aurica. Reyvateils are a female-only species gifted with the power of Song Magic. Their singing can heal or fortify their allies and hurl fireballs, hammers, furniture, and stuffed animal hordes at their foes. As Lyner delves into the mysteries of the tower, he must also dive into the Reyvateils’ psyches to strengthen their emotions and songs.

Though the story is interesting and highly original, it is poorly executed, particularly in the last phase of the game. The developers seem to have thought that the best way to propel the story along and keep things fresh was to force the player to move into another area every minute or so for one reason or another, or to return to the inn for rest and contemplation after every plot twist, discovery, or quandary. It is silly and exasperating to ping-pong between a handful of different areas in a matter of minutes. All this is topped off with a handful of unsatisfying and mediocre endings. As for localization, the text is littered with errors like “It’ll make you fell better” and “Sow it into your clothes.” Some of the lines seem to be directly translated without giving any thought to the character’s tone or personality, such as Lyner’s comment regarding a playful argument between two women: “…They are good friends.” 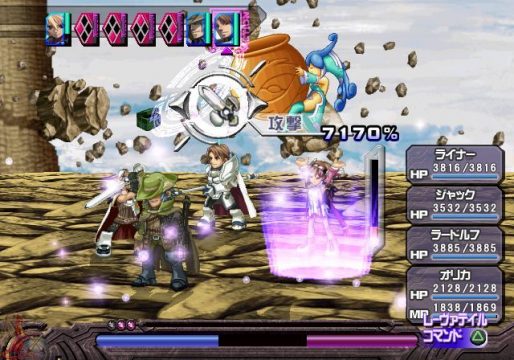 Never ask Aurica to show you her “big jugs.”

Fortunately, the Dive System — an important aspect of character development — is much better. Lyner must explore each Reyvateil’s Cosmosphere by taking her to a Dive Shop and entering a suspended state in which their minds are connected. Diving requires a degree of intimacy in the real world, and this intimacy comes from engaging in late-night conversations in the Reyvateil’s room and performing certain actions in battle, such as successfully protecting the Reyvateil from an attack or regularly calling upon her Song Magic for support. The system is laced with innuendo, particularly when Lyner can begin customizing songs by inserting special crystals into the young woman’s “Installation Port.” Inside the Cosmosphere, Lyner helps Aurica and Misha overcome different problems, such as insecurity, low self esteem, and trauma from their past, by facing psychological metaphors for each, like fighting a dragon or healing a friend. Each level unlocks new songs and equipment for the Reyvateils. These play out like text adventures, and they are sometimes better than the main story.

Battles are a bit intimidating at first with their harmonics, GD, bursts, and gauges. The point is to select the right tune to set the mood and have the Reyvateil sing as much as possible to raise the ambiance of the battlefield. The drawback is that this is usually pointless for quick battles, so this system only shines during boss fights and endgame random encounters. In the time that it takes the Reyvateil to power up an attack or support song, the melee characters can exterminate most or all of the enemies. Still, it’s a nice twist to the usual class division of melee and support characters. Strangely, there is no actual singing in combat; Song Magic is more like regular magic. 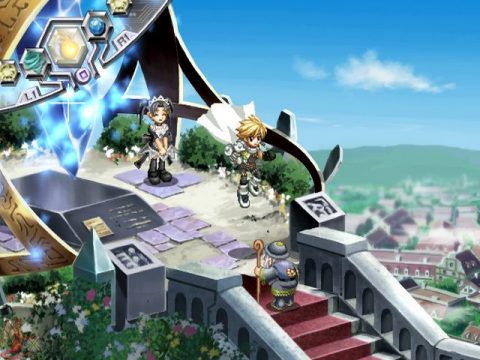 Perhaps it was because he spent too much time with young women, but Lyner could not resist glomping the old man.

Though Ar tonelico has lovely art, such as the Reyvateils’ costumes, most of the graphics are not impressive. The 3D overworld is on the low end of the PS2’s graphical capabilities. Field graphics are quite repetitious, and while consistency is good, some variety would be better. It is sometimes difficult to see pathways and exits, some of which are cleverly hidden so that the player may unexpectedly emerge on the world map and have to reenter the area from the beginning. Last, in spite of having a polished anime title sequence, there are only a couple of bland anime cutscenes in the game and no closing anime whatsoever — a real disappointment for a game with so much artistic potential and its own OVA.

There are also some interaction nuisances, mainly with the menus. Item lists scroll too slowly, and much of the game’s menu text is in a very tiny hard-to-read font. In combat, it can be difficult to tell whose turn it is due to the positioning of the command menu, so the player may have to consult the action sequence gauge at the top of the screen. Otherwise, interaction is quite smooth. Items, equipment, and character customization are easy to manage. In the item creation sequence, for example, the game detects which ingredients need to be prepared beforehand with separate recipes, and it automatically directs the player to the necessary synthesis. There’s even an option to make the text in each conversation box appear instantaneously, which thankfully speeds up any bland conversations.

One would think that a game with music as the primary focus would have stellar sound, but this is not entirely true for Ar tonelico. The vocal tunes are the most enjoyable, assuming one has a taste for nasal high-pitched Asian soprano. These vocal pieces are strong, passionate, and epic, especially the opening theme. The rest of the soundtrack is tolerable; some pieces have unusual vocals and pleasant instrumentation while the rest sink into synthesized mediocrity. A few tracks are outright grating, such as the distinctively atrocious shop music that was apparently designed to encourage impulse buying. Sound effects are flat and artificial, even irritating at times. The sound of Lyner’s footsteps on metal walkways and crunchy gravel paths is enough to make the player move by leaps just to avoid hearing it. The voice acting is not as offensive, but it is horribly bland. Most of the characters sound as if they are simply reading their lines out loud. Japanese voices are available, and so is the option to turn the voices off.

Ar tonelico is not very challenging, but it will take approximately 75 hours to experience the entire game. There are two paths that split off into different events with three different endings each, plus a “bad ending.” Aside from a bonus level in the Cosmospheres and an optional boss, there isn’t much extra content.

Ar tonelico is unique, pleasant, and sometimes funny, but missteps in pacing, poor execution in storytelling, and sloppy localization not befitting Nippon Ichi standards prevent it from being a quality game. Nevertheless, fans of the Atelier series may fall in love with this title, as it features Haruka Shimotsuki, the vocalist for the Atelier Iris games, and some special Atelier Marie and Elie cameos. It is unlikely that Ar tonelico will appeal to the broader RPG audience, but some individuals will appreciate its distinctive melody.