Aion: The Tower of Eternity Review

The world has been shattered in two; only the Daeva, winged heroes, can restore this balance. Will the player take the side of the shining white Elyos, or instead become a dark, maned Asmodean? This question and more can be answered by playing NCSoft’s newest MMORPG, Aion. A game that brims with interactive storytelling and a deep, interesting crafting system, the game is pulled down by the lack of character balance, the necessity of grinding, and the issues with the lauded “PvPvE” content.

A player begins their journey into the sky by choosing between the two factions and one of four classes: Warrior, Scout, Mage, or Priest. At level one the player crashes down and experiences memory loss, and moving through the introductory area is an effort to restore it. Upon reaching level nine, characters follow a set of quests to Ascend back into the heavens and regain wings, becoming Daeva (heroes) once again. Flight is limited to sixty seconds when first acquired, though this can be increased through equipment, potions, and special effects. At that point, each class branches off. Warriors may choose between the tank-type Templar or the DPS-minded Gladiator. Scouts may choose between the dual-wielding Assassin or the Bow-centric Ranger. Mages can choose to bond with nature as a Summoner, or blast bigger spells as a Sorcerer. Lastly, Priests break into the healing class Cleric, or move toward the buffing support of the Chanter. Though multiple characters per server can be created, once a player has chosen a faction, all characters on that server will be on the same side of the war. All classes are unfortunately not created equal, and some just cannot compete. Some strike out in PvP while others struggle through PvE content. This imbalance is being addressed in a timely fashion by NCSoft, so players can expect this issue to decrease or disappear entirely as time goes on.

Combat consists of weapon damage via automatic attack along with various class abilities. Aion takes an interesting twist with combat, where spells and attacks chain together for additional damage and effects — some abilities can only be used after a more common strike or spell has been used. This means half or more of the players’ abilities are contingent upon the correct chain being utilized, which is clearly denoted in a number of locations including the middle of the screen. Some abilities may also chain with other classes — for example a Gladiator may knock a mob down and a Chanter may use this opportunity for an ability only available when a mob is on the ground. Players will quickly learn to make judgement for better or worse based off their current chain and needs, making both group and solo play viable. 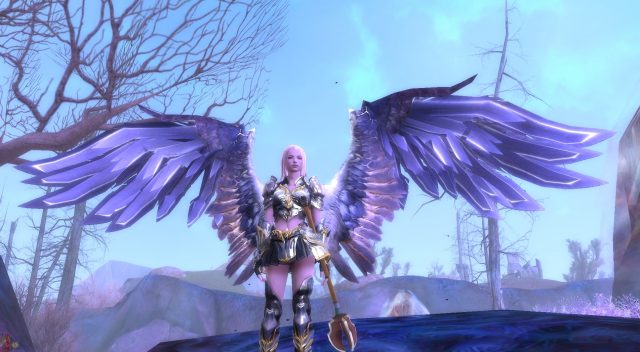 Though some grinding is necessary, most players will gain levels via questing. Tasks are divided into three sections: Campaign, which is the major storyline in which the character grows and evolves within the world; Quests, which generally require killing a specific number of enemies; or Work Orders, which tie into crafting discussed later. Many quests involve a number of steps, particularly in regards to Campaign assignments. For example, the player may be sent to an outpost after reporting to a region captain; from there a certain mob must be killed, and the evidence brought back to the outpost leader, and only then can the player return to the original captain for a reward. Those looking for a fast game will not find it here.

At level twenty five, players may complete a short quest chain to unlock the Abyss. This is where the combat against the Baluar — mortal enemies of both the Elyos and the Asmodean — is most intense. This is the lauded “PvPvE” section of Aion. This is a free-for-all PvP (player versus player) zone that also has regular PvE (player versus environment) quests along with mobs to kill. However, the focus is upon wresting control of part or all of the zone from the evil Baluar and then keeping it from both them and the opposing faction. Several times during the day, fortresses and powerful artifacts within the Abyss will become vulnerable to attack. In addition to this, PvP can occur in any zone intended for characters twenty and above as rifts open from the opposing faction’s area of the world. PvP points accrue as players kill opponents, perform quests and tasks related to PvP, and capture locations. Accumulating and spending these points dictates the player’s current rank.

Aion‘s crafting system is one of the most robust seen thus far in MMORPGs. Gathering all materials is lumped into a single profession all Daeva automatically get, with gathering Aether being a separate but also standard skill. Crafting materials such as leather may also be looted as swag from corpses. Also derived from defeated enemies is the Flux necessary to craft all final pieces, separated into Armour, Weapon, and Accessory fluxes with varying levels of usefulness — for example, a Lesser Armour Flux is different from a Minor Armour Flux, though both are used in the crafting of a player’s equipment. Professions are split into armoursmithing, weaponsmithing, handicrafts (focusing on accessories and bows/staves), alchemy (potions and scrolls), tailoring (for cloth/leather armour) and cooking. A player may learn any or all of these crafts. Every 100 skill points, a new level must be taught by the appropriate instructor which will cost increasing amounts of Kinah. A player may only have two skills over 399, with the maximum crafting level being 450. Gathering and crafting anything which may raise a player’s skill level will award experience, making these an important aspect of gameplay nobody should miss.

The game is simultaneously stunning and stunted visually at the same time. Players may choose to use dyes or break a piece of armour, turning it into a pattern which can then be applied to other equipment — this means players wearing identical armour will often look completely distinct, which is a nice change of pace from other MMOs available. Lush graphics make for a very compelling look; backgrounds have ample amounts of detail and equipment is often grandly stylized. By comparison, the character models often move stiffly as if they were marionettes on strings, and it seems clear more care was put into the female models than their male counterparts. If NCSoft is willing to work on updating the animation of both players and enemies, it would be a large step forward. Aurally, there’s no argument the music in Aion is composed magnificently, and players may find even after logging out that its tunes can be merrily hummed, though doing so out loud is not always recommended.

Aion isn’t particularly hard or boringly easy, taking the middle ground through most of its length. Some challenges can be overcome simply by gaining a level or two before approaching the problem, but there are also many group activities including outdoor dungeons, instances, and open world PvP. Players can expect to invest a minimum of eighty hours in order to reach the maximum level, although those familiar with the game or MMORPGs in general can likely shave ten hours off that if the most efficient path is taken with minimal downtime. Of course there’s always content to be conquered, enemies to be killed, and gear to be acquired for those who desire more play time.

The localization is very much a mixed bag. Though there’s no untranslated bits of awkwardly spaced dialogue boxes, the game’s grammar leaves much to be desired. While its English is technically correct many warnings and helpful messages read in a very awkward fashion and should be touched up at some point. The interface could also use some major work, as simple actions often require more work than is really needed. The auction house, though it is no longer case sensitive, needs to be further fleshed out to allow for greater flexibility in listing and buying options. Menus feel slightly clunky and could be cleaned up, such as including options to hide or grey out old ranks of spells. Also frustrating is the inability to move around pieces of the UI — something which has essentially become standard practise in a pay-to-play MMORPG. 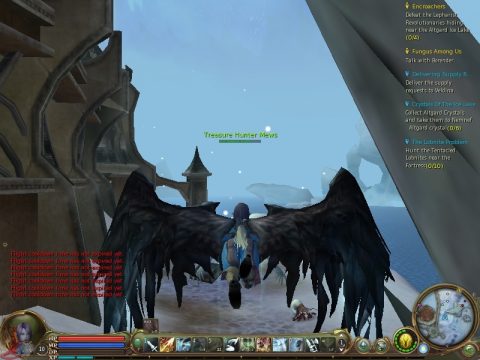 The story is one of the strong points of the game, being thematically appealing. As major quests are unveiled, often the player is treated to a short but powerful cut scene denoting where or why the quest is taking place. This is a great motivator and contributes to a very epic feeling; eventually a player may tire of this sort of dialogue if leveling characters repeatedly, but that would take quite a long time. It is interesting to note how the story changes depending upon the faction; the Elyos greet their new Daeva with pride and joy, whereas the Asmodeans wonder how such a piece of garbage ever received wings, just as a sample of the complete dichotomy in attitudes. The game definitely has some good originality, such as mid-air PvP combat, the combo system, and the dynamic storytelling, but while these aspects have never really been combined they’ve all been seen individually before in other titles. There’s no lack of originality, it doesn’t stand out as hugely imaginative.

Aion isn’t perfect by any stretch of the imagination, but it is an MMORPG that is working solidly at present and possesses a lot of potential for the future. Though the imbalance of the classes and the issues with PvP need to be addressed in short order, many players will sail through the game without ever being affected by these problems. Those who enjoy quest-only levelling should avoid Aion for now, as particularly past level thirty grinding is a necessity to continue levelling at a reasonable pace; those who do not enjoy PvP should also steer clear as the Abyss is an essentially requisite part of the game.

Tags: Aion: The Tower of EternityNCSoftPC