Adventure Time: The Secret of the Nameless Kingdom Review

What Time Is It? It’s Zelda Time?

Adventure Time is a franchise that can lend itself to anything. It can be a Zelda II clone, a card game, even a roguelike. In this latest installment, Adventure Time: The Secret of the Nameless Kingdom, Finn and Jake take on the stylings of The Legend of Zelda: A Link to the Past. But how does this clone fare? It works surprisingly well.

Our adventure begins with Finn and Jake exploring an uncharted area within the Land of Ooo. The two are asked by Pillowmint Butler to find out where all his princesses have gone. The two, always excited for a new adventure, set out to explore the Nameless Kingdom in an attempt to find out what has happened to its three princesses, and it borrows the series signature charm to tell its narrative.

While storytelling is never the main highlight in a Zelda game, Secret of the Nameless Kingdom attempts to tell an ongoing narrative in true Adventure Time fashion — with a lot of humor and randomness, and the dialog has many chuckle-worthy moments. The three princesses of the Nameless Kingdom have great personality as well, lending themselves to a really charming story of who truly wants to rule the world, and who simply wants a nap. Plus the cameos of the usual Adventure Time crew are hilarious as always, especially Lumpy Space Princess, whose cameo alone steals the show. 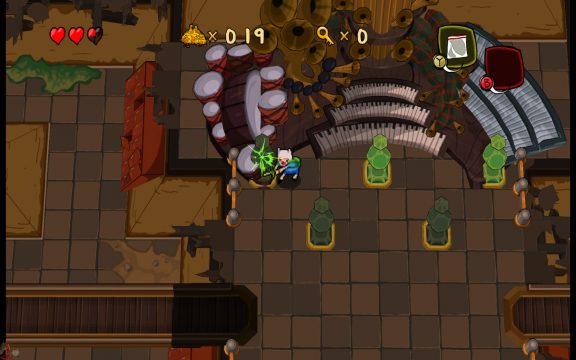 Since Secret of the Nameless Kingdom is an homage to Link to the Past, it borrows a large amount of the game’s mechanics without making any significant changes. Finn has tons of items he can collect, secret passages to bomb, skills that can be boosted through eating trail mix, and thumps to find which increase his health. Everywhere the player turns, there is something reminiscent of the old school Zelda games. Even the first quest of getting into the Nameless Castle is borrowed wholesale, which makes the similarities all the more enriching. This game definitely attempts to be an homage as opposed to a blatant rip-off, and it’s successful because of it.

As a true homage to A Link to the Past, Secret of the Nameless Kingdom has tons of puzzles for the player to solve. A lot of the puzzles are tied to the main quest, though there are a few related to sidequests as well. The puzzles have just the right amount of challenge, and elements are even included in the game’s boss fights. Many of the conundrums require the player to go back and forth between using Finn and Jake’s unique abilities to maneuver each dungeon, find chests, beat a boss, and save a princess. Some of the dungeons are more refined than others, and certain dungeons unfortunately outstay their welcome quickly. It’s very easy to feel overwhelmed with the amount of enemies and projectiles roaming around, and sometimes it’s tricky to have a moment to breathe to figure out the puzzle. Also be prepared for a lot of backtracking, because many quests are connected to other quests, and it’s not easy to remember where one needs to backtrack to, so the game is full of a lot of trial and error.

If there is anything Secret of the Nameless Kingdom‘s dungeons should be praised for, it’s the amount of creativity placed in the boss fights. In one situation, Finn must use prisms to guide colourful beams of light to attack a boss, but it’s structured as a puzzle, so there’s a specific pattern that must be achieved before the boss can be damaged. This is on top of dodging projectiles while moving prisms around at the same time. Another requires luring the boss into the centre of the area and pressing a switch to pound it with a beam of light. Frantic and fun, the boss fights are easily a delight, never feel dull, and constantly offer a unique challenge. 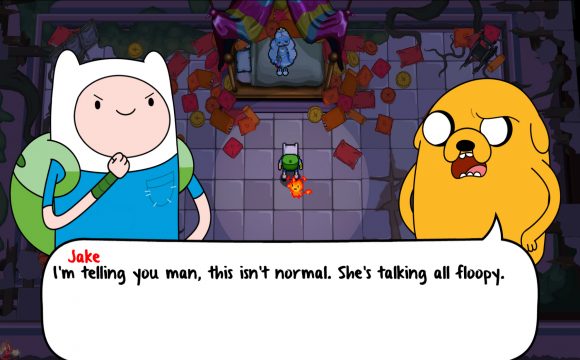 Secret of the Nameless Kingdom does have its shortcomings, which is disheartening. For starters, the hit detection issues that were apparent in the previous Adventure Time game, Explore the Dungeon Because I DON’T KNOW!, make their triumphant return, and are definitely just as frustrating here as they were there. This is problematic especially during boss fights where the player can see the enemy being hit and it not registering in the slightest. The game also isn’t the best at giving cues to the player for what he needs to do next or where he needs to go. Having a few hints might have been more beneficial, though for Zelda fans, this may be exactly what they are looking for.

Secret of the Nameless Kingdom also suffers from graphical glitches, particularly in the later dungeons, as on numerous occasions Finn and Jake would walk through walls that they shouldn’t be able to. There’s also a fair amount of slowdown on the PlayStation Vita version, especially when there is far too much happening on the screen. For an homage, this game struggles from a lack of polish and it shows in numerous areas in terms of the game’s design. It is heartbreaking considering there’s a lot of attention to detail when it comes to replicating the gameplay of A Link to the Past.

For a Zelda clone, Secret of the Nameless Kingdom is pretty successful in a lot of ways. The challenge level isn’t very daunting, and the game can be completed in roughly ten hours, closer to fifteen if one attempts to complete all of the quests. There’s a plethora of expeditions to complete, multiple endings to score, and it’s just the right amount of extra content without feeling bloated. Outside of the graphical issues, the game actually looks great and it’s very true to the game it attempts to mimic. The voice overs are fantastic, the soundtrack is fairly catchy, and it’s noticeable how much love Wayforward put into this game in terms of making it appealing not only to Adventure Time fans, but Zelda lovers, even from the choices of sound effects alone.

Adventure Time: The Secret of the Nameless Kingdom is easily a large step up from the previous two games in the series. It still has all the charm of Adventure Time, and borrows the best aspects of A Link to the Past to make for a great homage. It definitely has its problems, and the game varies in quality in some parts, but it attempts to be a love letter to a game that many cherish, and it succeeds in that accomplishment. It’s just a shame that the game lacks so much polish, because it had the potential to be an algebraic adventure and not just a playful homage.