Adventure Time: Explore the Dungeon Because I DON’T KNOW! Review

Licensed properties are always hit and miss. Not every franchise lends itself well to gaming, let alone particular genres of games. Adventure Time is one series that feels like it should, as its crack cocaine style of insanity seems to lend itself to just about anything it touches (gum and all). Adventure Time: Explore the Dungeon Because I DON’T KNOW! is a dungeon crawler that takes place in an underground “fungeon” deep below the post-apocalyptic Land of Ooo. How do Finn and the gang survive their first RPG adventure? It’s so-so to say the least.

Her Royal Highness and resident scary-pants, Princess Bubblegum, tasks Finn, Jake, Cinnamon Bun, and Marceline the Vampire Queen to explore the dungeon of I DON’T KNOW because, well… she wants them to figure out how the evil doers of the Bubblegum Kingdom have been escaping. Finn and Jake love adventures, so they immediately take on the quest without much thought. As the group delves deeper into the dungeon, they soon realize that many of their friends and foes have been trapped, warped, or have gone just plain crazy — and that’s an understatement.

There’s not a lot to this bare-bones story covered in rainbow paint. As players dive through the dungeons, every ten floors they hit a boss fight that showcases a new Adventure Time character. When the boss fight is completed, the character is transferred back to the hub where they either become playable characters or quest givers. Although there’s not much to the story, there’s still this nagging desire to find out what the “I DON’T KNOW” part of the dungeon is. In fact, the final results at the end of the game are quite hilarious, if a touch awkward. A lot of the humor has been integrated throughout the game, so those familiar with the source material will likely be able to get many of the jokes that others might not have a clue about. It would have been nice to have bigger payoffs in the story department, but that’s not what dungeon crawlers are about!

There are over one hundred floors within the fungeon of I DON’T KNOW, with every five floors being a check point, and every ten being a boss battle. Throughout the process players will be able to equip magic tokens that allow for some extra help within the dungeons. These include super speed, protection from status ailments (which include hugs), and a plethora of other options. However, tokens can only be equipped before dungeon exploration with a maximum of two unless players control Finn, whose special ability is to equip three tokens. Once equipped, players are stuck with their choices until they die or hit one of the two checkpoints, meaning there’s no wiggle room to experiment. 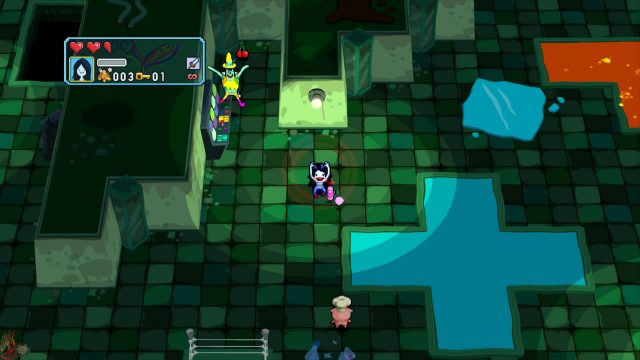 Once inside of the dungeon, players will be rushing through each area trying to collect as much loot as possible while dodging anything and everything that is out to kill them. There’s an intense amount of enemies, so blocking and dodging become a big part of how to survive… if they worked most of the time. Trying to pull off perfect blocks is surprisingly difficult and poorly explained in the tutorial, and most of the time it’s challenging to reflect projectiles back at enemies successfully. There is not much else to the combat other than regular attacks and power moves which can be performed by holding the square button. If players find and equip a weapon, they can use the triangle button to aim as best as they can. It’s not always easy to hit enemies with equipped weapons due to the very loose controls. Once in a while, the player will be aiming one way, but the attack ends up changing in a different direction. Sometimes there’s too much happening on the screen to even try to have a fair fight or use the weapons to bust out of the fray. Even with each character’s unique abilities, it only helps so much and doesn’t do enough to vary the constant barrage of enemies.

Again, this is a dungeon crawler and for the most part, dungeon crawlers follow a code of simplicity. While the combat is mediocre at best, Adventure Time does an amazing job at varying its boss fights, creating unpredictable situations that cause players to simply go with the flow. The boss fights include running away from a stampede, performing mathematical equations, and even dodging a battle of godlike power. Sometimes fights require having patience instead of running at the enemies, other times, they just require you to watch patterns or hold out until a specific point. Regardless, these are the battles that shine within Adventure Time and stay completely memorable compared to the rest of the game. 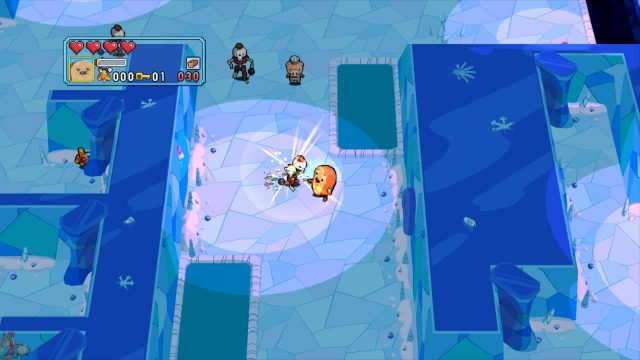 Enjoy this roasty, toasty, Cinnamon Bun, rolling… IN YOUR FACE.

Another aspect that glimmers within I DON’T KNOW! is the game’s voice work and sound. The soundtrack is excellent to listen to, getting players pumped up to explore the dungeons, with each track being more unique than the previous. Couple that with the voice acting, and it makes for a fun experience roaming through each stage of the dungeon. Each of the characters is voiced by their respective actor in the television show, and all the cutscenes are voiced, adding that extra touch. The graphics sport a wonderful retro-vibe, pixilated and all. It adds to the overall presentation, providing the feel of an old school dungeon crawler.

Here’s where Adventure Time gets complicated. Despite it being a fun, simplistic romp, it feels like the PlayStation 3 version was barely play tested. On numerous occasions it would cause load time freezing, as well as hardlocks on the console. It even hardlocked to the point where with a system reboot, it is possible to lose one’s saved data, which is why this review is based on an incomplete playthrough. The fact that the game only auto-saves and does not offer a manual save option is a testament to this. There are also cases of slowdown when there’s too much happening on the screen. These glitches should have been ironed out before the game shipped, as there’s no reason to have to restart the console every time the game decides to have a nervous breakdown.

Adventure Time: Explore the Dungeon Because I DON’T KNOW! is an interesting experience that uses its source material well to create a crazy experience for its fans. It offers a lot of insanity for the budget price of $40, but really might be for the diehard Adventure Time fans as those who like dungeon crawlers can certainly find better. If the game wasn’t crippled by its glitches and save data wiping, there is an entertaining experience to be had. Before purchasing it may be worth it to look into the known glitches and see which version may be the best to play. There is fun within the insanity of Adventure Time, especially since the game can be played co-op, but it’s one to be weary of with the laundry list of stinky problems it has.