All that made West of Loathing such an enjoyable title is present and accounted for here, aided by a slightly firmer structure that makes progress easier to keep track of.

Asymmetric Publications’s stick figure Kingdom of Loathing browser RPG has been around nearly twenty years now, but the developer made its mark in 2017 with the launch of West of Loathing for PC and again the next year when it hit Nintendo Switch. Taking its stick figure graphics and injecting them into its own humour-packed version of the Wild West, the game provided tons of entertainment. Now, Asymmetric Publications is putting its own spin on eldritch and supernatural mysteries of 1920s America with the surprise launch of Shadows Over Loathing. All that made West of Loathing such an enjoyable title is present and accounted for here, aided by a slightly firmer structure that makes progress easier to keep track of.

Shadows Over Loathing joins players as they travel by bus to Ocean City at the behest of their Uncle Murray, who runs his own antique store. Players are given some customisation options during this prologue, where players choose a gender, appearance, and name for their stick figure protagonist, with a class selection option appearing later. After arriving in Ocean City, they discover that Uncle Murray is missing after gallivanting around once again, but make their home in his antique store, which doubles as a front for his search of cursed relics. Roped into joining the search, players travel around Ocean City in search of these cursed relics hoping that they will lead them to Murray. 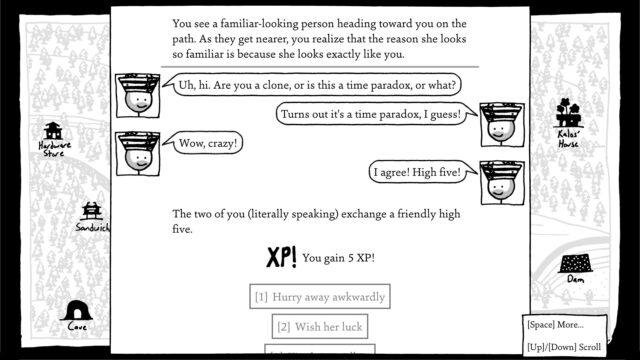 A regular meeting in Shadows Over Loathing.

The game is split into chapters, with each chapter seeing players hunting for a certain relic in a different part of Ocean City. Each part of the city has its own map that fills out as players explore it, with the main quest joined by a large variety of sidequests. While the overall story from the first three chapters has been straightforward, Shadows Over Loathing’s writing has been fantastic. The game is packed full of humour, playing off the various levels of bizarreness in its setting as well as commenting on some of the nonsensical things that happen in games. The new structure helps give it different themes to play with, such as the time-travelling shenanigans of its second chapter lending themselves to fun explorations of causality. There’s always a danger with humour of trying too hard, but here it’s done in an intricate way that makes it always feel like a natural part of the setting.

The hefty selection of sidequests and puzzles make it well worth it to explore all there is on offer. Many elements involve players’ character builds, with their stats and perks allowing them to interact with different things in the world. These stats are affected by a wide mixture of temporary buffs such as potions or food, equipment, and permanent skill upgrades obtained by spending experience points in lieu of an outright level system. Puzzles can definitely be tricky, and may require subverting some expectations, but this also makes it immensely satisfying to find solutions.

For having just a simple stick figure art style, Shadows Over Loathing looks great in motion. The animations are brilliantly smooth and work with the writing to inject that sense of fun, with elements such as different shoes giving players bizarre ways of traversing the world. The game works well at making areas distinct despite the simple black-and-white palette. Its music fits in with everything else as well, with plenty of jauntiness adding to the fun. 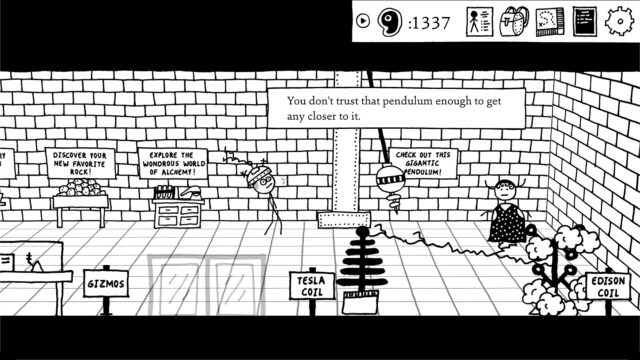 Shadows Over Loathing’s turn-based combat is much the same as its predecessor, with players joined by a companion and a pet. The companion has a small selection of actions to choose from, while the pet acts automatically, usually granting an attribute boost each turn. The player character has a number of Action Points, which can be used freely on skills and spells within their turn provided they have sufficient AP, as well as items. Fortunately, the game is very forgiving when it comes to defeat, simply putting players back where they were before the fight started, while some defeats will actually give the player a stat boost.

Those who enjoyed West of Loathing will be right at home in Shadows Over Loathing. It very much builds on what its predecessor achieved, with the added benefit of being very welcoming to newcomers as well. The game’s gleeful leap into the bizarre, always with humour and fun in mind, makes it easy to wander through Ocean City with a smile.