If the party fails a fight, often replaying that battle with a different approach will yield a new result. This really makes every win feel quite satisfying.

King Arthur: Knight’s Tale is a tactical turn-based tactical RPG set in a darker version of King Arthur’s legendary story. In this version, the king and his nemesis, Mordred, fought to the death in a cataclysmic battle that decimated both armies. Years later, a plague covers the land and the undead rise up, led by none other than King Arthur himself. The Lady of the Lake resurrects Mordred to fight off the hordes and finish what he started by slaying King Arthur once and for all. This is where the player enters, controlling Mordred as well as the various knights who join his new round table on the way.

Gameplay is broken up into various sections. The bulk of the time is taken up by missions, each of which takes place on a dedicated map. Each one has a handful of tactical battles, triggered at certain points on the map, and their completion is required in order to finish the mission. A limited number of campfires can also be found, used to restore some armor or health to the team between fights, while careful exploration will turn up small caches of items or money littered around the map. Furthermore, optional battles or events may also be discovered.

After completing a mission, the knights head back to Camelot to restock, train, and tend to the wounded. A wounded knight may need several missions to heal in the appropriate facilities. Mordred can use resources earned from missions to construct and upgrade a variety of buildings needed to service his troops. This includes the fabled round table, which starts off only able to seat four knights but can be upgraded to a full dozen chairs.

Before heading out to another mission, optional events give the players a chance to make difficult decisions that not only impact their kingdom but the morality of Mordred as well. Morality is tracked via two axes. The first measures how Mordred rules, as a tyrant or a rightful leader. The second measures whether he supports Christianity or the Old Faith. Various side missions and abilities open up as the player progresses further on the morality chart. 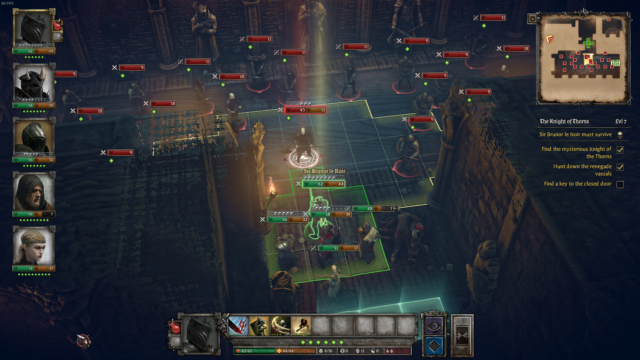 Did someone ask for a welcoming committee?

The combat in the game is quite solid. Each knight has a basic attack and various special attacks with cool-downs. These special attacks are unlocked by spending skill points earned by leveling up. Individual knights focus on defense, melee offense, ranged offense, or support based on their class. Turns are team-based; all allies get a turn before passing to the enemies, and players can choose the order in which their knights act. Situational counters provide plenty of tactical considerations; for example, many front-line units have armor that reduces incoming damage, but some combatants excel in shredding armor. Some attacks can debuff enemies, applying crippling conditions. Traps can be set for unsuspecting enemies that cripple and slow them down. Using these effectively and efficiently is key to minimizing damage to Mordred and his knights.

All attacks hit, but there is a small amount of random spread in the damaged delivered. This goes a long way to making the player squarely responsible for success or failure in combat. If the party fails a fight, often replaying that battle with a different approach will yield a new result. This really makes every win feel quite satisfying.

Each knight has a small pool of hit points and vitality. Hit points are easily replenished with potions and after a mission. However, once the hit points are depleted, vitality is reduced with each hit instead. A character without hit points that is attacked further may also suffer permanent wounds, decreasing their effectiveness. They will need to take time out in the appropriate facilities in Camelot in order to regain their vitality and heal from their wounds. This adds gravity to each fight. Even if your knights live, they may be so wounded that it will require quite a bit of healing for them to return to active duty, making it so choices in combat have consequences. 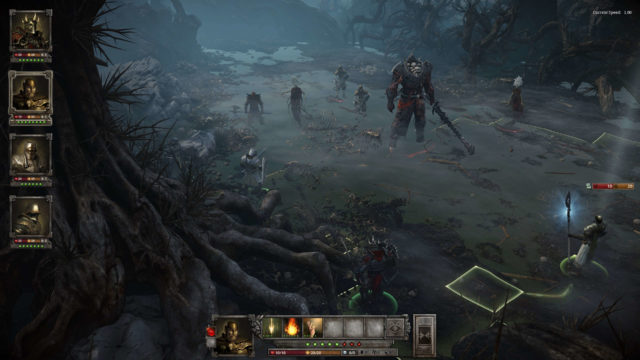 Variety is something lacking overall in King Arthur: Knight’s Tale, especially given just how long the journey is. While there is a mix of enemies to engage with, there is not enough to keep the fights entertaining throughout the entire adventure. Terrain plays a role, offering cover from ranged attacks and bringing some variety to encounters. Unfortunately, it does not do enough to shake the formula up from fight to fight.

King Arthur: Knight’s Tale takes roughly 60-90 hours to complete. Only characters going on the missions or in a training center gain experience points, which usually means that half of the group is not growing. Given that a mission of a half-dozen fights may only give one-third to one-half of a level’s worth of experience, progression feels deliberately lethargic. Cutting the encounters of each mission by half would have gone a long way in addressing the pacing issue here.

This feeling is exasperated by the graphics. Technically, they hold up well. The textures look fine, and there’s no pop-in or tearing. However, everything looks low contrast. This fits with the theme of the story overrun by darker elements, but after a dozen missions everything just looks the same and it feels uninspired. Once you’ve seen one dead forest with a graveyard and dilapidated building, you’ve seen them all. Constantly searching for any hidden treasure only adds to the amount of time spent staring at monotonous deadlands.

Overall, King Arthur: Knight’s Tale has quite a few things working in its favor for fans of tactical turn-based combat. This emphasis on mathematical outcomes during combat rewards players that think strategically. The story, while hardly unique, explores an interesting perspective as the antagonist is forced to defend the people he once attacked in order to fulfill his true purpose in life. However, RPGamers wishing to fully explore the tale will need to invest quite a bit of time and have patience with the repeated, bland backdrops. Those with the patience to do so may find Mordred’s journey to be a fulfilling one.