AI: The Somnium Files – nirvanA Initiative is very much built upon the foundations of the previous game. Following a case of serial killings across two investigations six years apart, it follows two investigators from ABIS, a secret investigation force that can Psync into the subconscious and dreams of important witnesses and suspects to get otherwise unobtainable information. The investigators don’t act wholly alone; each is joined by an AI-ball that spends most of its time in their left eye socket, acting as an investigative partner and providing access to numerous tools.

The case in nirvanA Initiative is that of the “Half-Body” serial killings. The introduction sees returning character and newly recruited ABIS agent Mizuki discovering the left half of the corpse of reclusive tech boss Jin Furue. If that wasn’t strange enough, the right half of Jin’s corpse was found six years prior at the beginning of the case, but both sides show signs of being found roughly the same time after death. Figuring out the case requires going back six years and discovering what happened in the original investigation conducted by another ABIS agent, Ryuki. 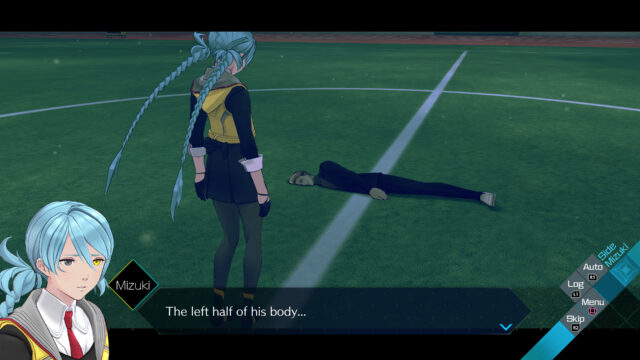 I wonder how they came up with the “Half-Body” serial killings’ name.

Like its predecessor, and the Zero Escape titles before it, the mysteries incorporate breaking of the fourth wall, which has an interesting role in both solution and obfuscation, as well as some higher-minded concepts. Solving the case is reliant on the player collecting information in one route to be able to progress in another. However, it is more linear than players of Uchikoshi’s previous works might expect, perhaps necessitated by the nature of its later reveals. Although the case begins a short time after the end of first game, nirvanA Initiative is designed as a completely separate one, so new players can jump in. There’s even an option for players to let the game know if they aren’t familiar with the events of the original, which changes some of the dialogue. That said, it definitely feels like players will get more out of the game, especially its returning characters, if they have already played AI: The Somnium Files.

nirvanA Initiative comes with an eclectic mix of characters. Continuing where she left off in the previous game, Mizuki is a delightful protagonist, while both Aiba and Tama — the AI partners for Mizuki and Ryuki — are great wisecracking sidekicks. Parts of the writing may be a bit take-it-or-leave-it for some; it takes great pleasure in making wince-worthy, often innuendo-based, jokes and being a bit over the top. However, the character establishment and their interactions are fantastic, and a large part of what makes the bulk of the game so engaging. nirvanA Initivative absolutely has multiple highly satisfying moments where things slide into place; however, its ultimate solutions rely on some contrivances that, while being hinted at and possible to guess, are a bit of a stretch. The way the grand finale plays out is also a bit at odds with the rest of the game. Nevertheless, the bulk of nirvanA Initiative — as players mingle with the characters, uncover new information, and solve its puzzles — is immensely engaging and easy to get immersed in.

The gameplay loop is much the same as the previous game. Players jump between locations, engaging in some point-and-click investigations and conversing with characters to obtain information and move the story along. There are certain interactive action events, though the level of interaction is limited to a small amount of quick-time button presses. New elements include the Wink-Psync, which can give a brief glimpse into a character’s head, though its impact on puzzle solving is negligible. AI’s big differentiator, however, is its Psyncing. 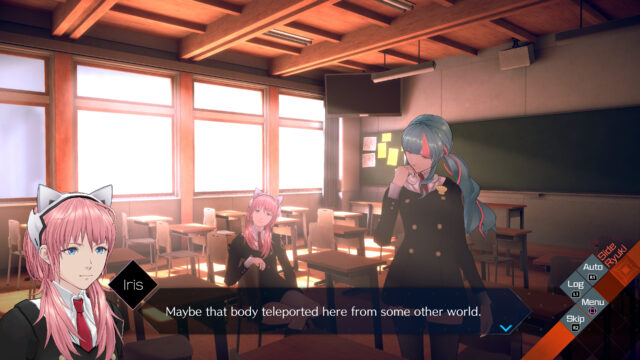 nirvanA Initiative features a mix of new and returning characters.

Psyncs take players into the target’s Somnium, a dream world that follows its own unique logic and rules. Here, players need to break mental locks to access the information they seek. A Psync can only last up to six minutes, but time has its own special rules too. It advances as normal while moving, but goes by extraordinarily slowly while standing, giving players time to ponder. Each Somnium has a number of things that can be interacted with, and each dedicated action uses up a certain amount of time. Some actions will provide TIMIES, which can drastically cut down the amount of time a future action takes, although they seem to play a smaller role in nirvanA Initiative than in its predecessor. This may be down to the game’s new difficulty options, which provide more time and quick retry options to play around with, making the time management aspect less crucial.

The challenge in the Somnium puzzles is figuring out the brand of logic needed for each one. There’s a strong variety in the type of thinking needed; some consist of more traditional visual puzzles and pattern recognition, while others will require players put their minds into what they know about the relevant characters and their past actions. The price for failure is light; there are a limited number of quick retry options that can take players back to a past checkpoint in the Psync, and if players gain knowledge of a code from a previous attempt, they can bypass most of the steps needed to obtain it. At worst, players need simply restart the Psync from the beginning.

The Psync sections are also notable for being where the route mechanic comes in. Certain Psyncs will present players with a choice as to which one of two mental locks is broken. Once one is chosen, the Psync and subsequent events diverge down that path. Players can use the flowchart to return to any previous point in the game, but there’s no need to do this until they’ve either reached a roadblock or an “ending”, some of which are more like a non-canon conclusion of a character arc rather than an actual ending. Some mental locks are not possible to break until players have obtained information from other routes. By and large, the puzzles in nirvanA Initiative are highly satisfying. The game provides enough information to make them solvable without relying too much on trial and error, and though the route system itself is less of a puzzle this time around, it offers an intriguing extra level to the mystery. 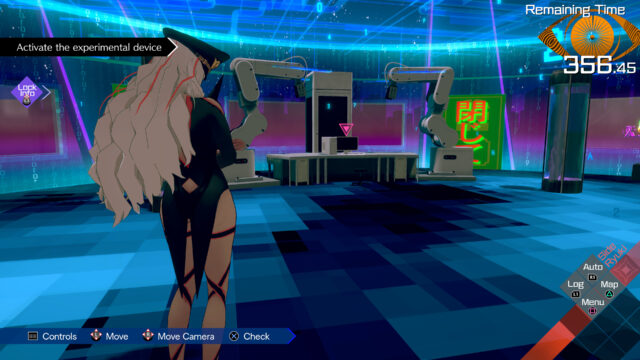 The Somnium dream world puzzles retain their own unique logic.

nirvanA Initiative includes a few optional distractions if players want, but these can be readily ignored and turned off. Players can visit Aiba or Tama’s “rooms” for some life advice and dress them up in outfits, which are used in replayed events and obtained by spending eyeballs earned throughout the gameplay. There’s also the Tamagotchi-like Eyeballie, where players can grow a digital creature into various forms based on the game’s characters by answering questions, earning them more eyeballs for each form found. Both are likely to quickly be forgotten about by many, but add an extra bit of fanservice for those who want it.

The game’s animations don’t try and keep up with the big budget titles out there, but they work perfectly well in conveying everything that’s happening and the game remains pleasing to look at. It focuses on good use of colour and designs to make its visuals distinct and engaging. The action scenes make some appreciable effort to offer a sense of spectacle and largely succeed in breaking up the tenser moments, and like its predecessor, there’s a bit of song and dance to enjoy too. The English voice acting is strong throughout — there’s a definitive sense that the cast is enjoying the opportunities to get a little goofy while still being able to turn it on in the emotional scenes — and the music has a strong mixture of catchy and tense, atmospheric tracks.

AI: The Somnium Files – nirvanA Initiative is a title in which fans of other Kotaro Uchikoshi titles will find a familiar sense and much more to like. The game definitely comes as part of a distinct oddball brand of mystery and humour, but the way the mystery sucks players in is still fantastic. While its ultimate resolution is not quite as satisfying as its brethren, the way it uses its cast, some higher-minded concepts, and the player themselves makes for another highly absorbing title across its twenty-plus hours.