In this edition of the column we take a look at AI: The Somnium Files, a new adventure title from Spike Chunsoft directed by Zero Escape series creator Kotaro Uchikoshi.

Kotaro Uchikoshi, who has risen to prominence on the back of the Zero Escape franchise, returns with a brand new title, AI: The Somnium Files. The game contains many of the familiar trappings associated with his prior entries, but AI: The Somnium Files still puts its highly intriguing stamp on the genre thanks to a great cast, a smartly unravelling story, and intriguing puzzles that make use of the odd logic of dreams. It’s a greatly entertaining title that any adventure fan will find a lot to like in.

Players are put in the role of Kaname Date, an investigator with the special ABIS team within the Tokyo Metropolitan Police Department. With the help of his new boss, known simply as Boss, Kaname joined the force shortly after losing his memory in an incident six years ago. Date is also missing his left eye, but in its place is an artificial eyeball housing an AI. This AI, called Aiba, often appears to Date in the form of a young woman, and the two have formed a partnership for the last five years. ABIS’s special nature comes in its use of a special Psync Machine, which special investigators like Date can use to dive into a subject’s Somnium, effectively a dream world formed by the subject’s subconscious. Though any evidence gathered in the Somnium isn’t of much use from a legal standpoint, the information it uncovers often provides vital leads for its investigators. 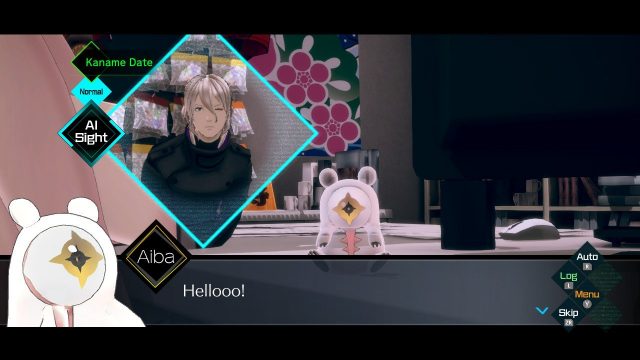 Aiba can also pop out into a hamster-like form.

AI: The Somnium Files begins with Date called out to investigate a dead body at a shutdown amusement park. The body turns out to be Shoko Nadami, one of Date’s friends and the mother of Mizuki, a twelve-year-old girl for whom Date is currently acting as guardian. Shoko is found tied to a carousel horse and missing her left eye. When Date arrives at the scene, he discovers Mizuki hiding within the carousel’s main column. With Mizuki not talking due to her state of shock, Date psyncs with Mizuki to both learn and try to help her overcome the trauma of what she witnessed. At this point, the different paths that those familiar with Uchikoshi’s work are likely expecting kick in.

The game is split into two main parts. The bulk of the game comes from standard investigations, where Date and Aiba follow the leads to various places and chat with persons of interest while checking around those places for multiple clues. The rest of the game is Date’s psyncs with others, during which he has six-minutes to investigate the subject’s Somnium; any longer and bad things happen. The actual route splits come in a select few of the psyncs, where there are two potential ways to solve particular puzzles, the method chosen sending players on that particular route. There are five routes in total, but only three of these can be completed at the start, with the remaining two locked until those others are completed.

The psyncing puzzles are where AI diverges the most from traditional adventure games. Though Date has a six-minute time limit for his psyncs, the actual actions in the Somnium are undertaken by Aiba under his orders. Fortunately, Aiba gains a special feature that slows time down by a factor of 100 whenever she isn’t moving, giving players enough time to contemplate their actions. The divergence in Somnium puzzles comes from the fact that these are dream worlds and, as those who can remember parts of their dreams will attest to, they rarely follow the rules of real life. 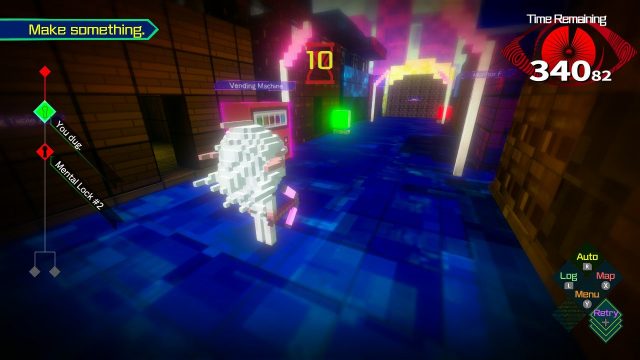 ShovelForge is an original creation, like Rickey Rouse and Monald Muck.

For each object in the dream world that Aiba can interact with, there are multiple possible actions, each of which uses up a certain amount of time. However, these actions can also provide items called TIMIEs that can be used to drastically reduce the time a future action takes, so sometimes it is much more effective to do an action that doesn’t push the puzzle forward in order to gain a TIMIE for future use. The fun of the Somnium puzzles comes from figuring out how the logic of each one works — each retains a particular theme or setting — as well as trying to maximise the time available. Though it starts out feeling a bit strange, once players have gotten through a couple of the Somniums, things start to click, and the game does a nice job keeping the puzzles tight and not overloading players with too many options.

AI: The Somnium Files makes fine use of a great cast to tell its story. There are some higher-minded concepts such as parallel worlds, memory, and identity, and some aspects of the Butterfly Effect in the route variations, but the actual plot feels like it is properly driven by its characters and their actions. Date and Aiba make a great partnership, and the supporting cast does a great job as well, particularly the sassy Mizuki. There’s a good mixture of entertaining back-and-forths, particularly if players like to take the time to examine everything in a given location, as well as highly emotional events. It may start out a little bit slowly, but once the story opens up it becomes very hard not to keep playing as long as possible to try and see the true ending, which will take around twenty hours. The one misstep is that it is hard to take the game’s few action scenes even remotely seriously given the heavy use of adult magazines. 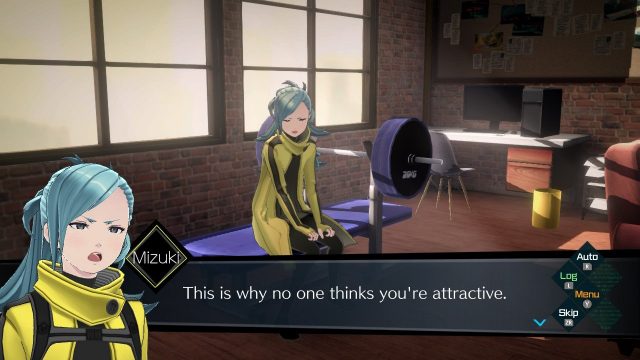 It’s hard to argue against someone who has a) a good point and b) a favourite iron pipe.

It’s been pleasing to see the steady upgrades in production values in Uchikoshi’s past few games, and AI: The Somnium Files gets the highest so far. The designs don’t try to be too realistic and help give the game a good style. The animations on the characters are good, and there are plenty of neat effects, particularly in the Somnium sections, though the Nintendo Switch version suffers from some odd pauses when it is loading certain assets, particularly quick flashbacks and asides. It should also be noted that though it isn’t quite the outright bloodbath of Zero Time Dilemma, AI: The Somnium Files isn’t afraid to get gory when it wants to. AI: The Somnium Files features a good localisation from Spike Chunsoft with some fine English voice work, starting with Greg Chun’s Date and Erica Harlacher’s Aiba but continuing right down the cast list. The music works nicely in the situations it is given as well, though the crowning — very spoilery — audiovisual treat comes during the final credits.

Virtue’s Last Reward still comes out on top in my personal rankings of Uchikoshi’s best work to date, but AI: The Somnium Files follows very closely behind. It brings an appreciably different approach through puzzles that manage to be more universal through the shunning of regular logic, with a strong cast and production that easily carry its story through to a very satisfying conclusion. AI: The Somnium Files is an easy recommendation to anyone with a passing interest in adventure titles.